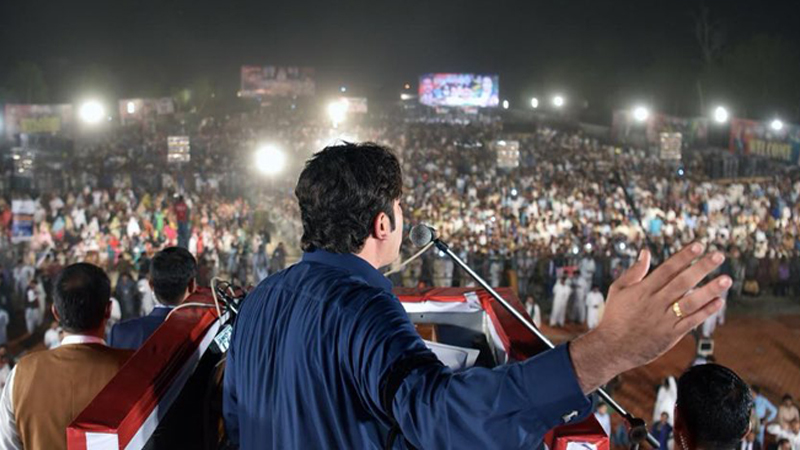 LAHORE/LAYYAH: Pakistan People’s Party (PPP) Chairman Bilawal Bhutto on Thursday vowed to make southern Punjab a separate province if his party was voted to power in the upcoming general elections.

“Layyah has always voted for PPP. If [anyone] can make southern Punjab a separate province, it is PPP,” he told a rally in Layyah. Criticising the political opponents, the PPP chief said they opponents would get nothing out of Layyah if they continued to use the issue of a separate province for personal gains.

Highlighting his party’s work in the region, Bilawal said the PPP brought gas to Layyah and always worked for the people’s welfare. Slamming the ruling PML-N, he claimed that no quality hospital or university was built in the region over the past years. “PPP never focuses on one city alone. We have built hospitals in several cities and towns across Sindh.”

Lamenting the water shortages in the country, Bilawal pointed out that his party invested Rs 11 billion in water projects in Thar alone to alleviate water scarcity in the region. He promised the PPP would implement similar projects in Layyah and other parts of the province if given a chance in the upcoming general elections.

Earlier in the day, Bilawal visited Interior Minister Ahsan Iqbal at Lahore’s Services Hospital, where he is being treated for gunshot wounds.

Speaking to media outside the hospital, the PPP chairman strongly condemned the attack and called for a detailed probe into the assassination attempt. “Incidents such as the attack on Ahsan Iqbal should not happen. Be it government or opposition, we all need to unite against politics of hatred so that we can fight out extremism from our society,” he said.

Bilawal condemned the release of ‘terrorists’ arrested for involvement in assassination of former prime minister Benazir Bhutto. Calling it a ‘national issue’, the PPP chief said, “Benazir’s murder is not my personal issue … it matters to the entire country as she was the first woman prime minister of Pakistan and an international leader.” “We had submitted a request when the five terrorists were acquitted,” Bilawal said. “Even DNA tests carried out at a laboratory abroad proved their involvement in the assassination, despite that bail was granted.”

Bilawal also spoke about the clashes that erupted between workers of his party and those belonging to Pakistan Tehreek-e-Insaf in Karachi. “We have been condemning such attacks since day one. All our opponents are humans first and then politicians … such attacks should not take place,” he said. “We all should come together against politics of hatred, be it lawmakers in the treasury benches or in the opposition.”