The ‘Charter of Democracy’

Zardari is pragmatic in formulating his policy and strategy. He takes stock of the ground realities first 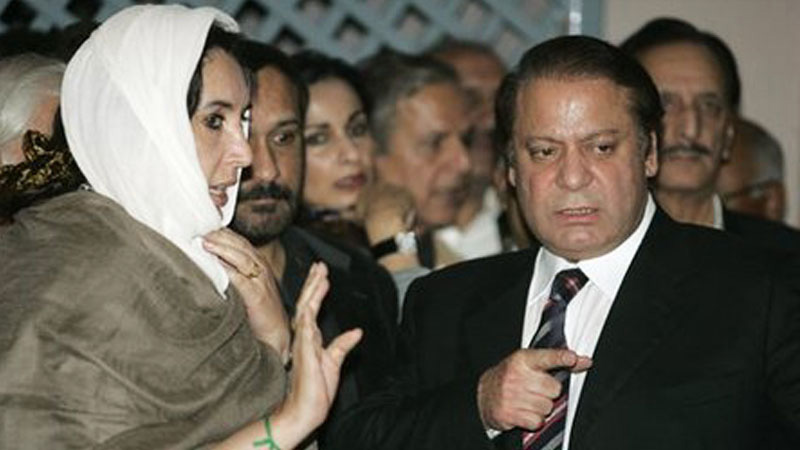 Asif Ali Zardari has come forward with the charge against Nawaz Sharif. While he has denied any such statement, the whole media was engaged in debating over this. The question is still lurking in the middle: who damaged the democracy? And that Charter of Democracy that was a momentous piece of agreement achieved by the two major parties — and arch-rivals of the country. It was this accord that paved the way for two consecutive ballots in the history of Pakistan and the third one is on the anvil. It is a long history; evidence in itself. Democracy is countered by the Democrats themselves the most. In all odds, the Charter of Democracy was great hope and a leap forward.

Suddenly, the things went back to square one. Yesterday, it was PML-N who stabbed in the back of PPP, and today it is PPP. When Tahir-ul-Qadri and Imran Khan crippled everything with their demonstration at D-Chowk, Zardari and his party stood by the PML-N in the name of democracy.

And recently, Khan and Zardari both attended the rally in Lahore that was organised by Tahir-ul-Qadri and his party earlier this year. They also nominated a joint candidate for the position of Chairman Senate. Zardari foresees the lower house filled with reasonable independent members. His recent manoeuvring in the Senate polls establishes him as a class batsman on the turf of politics. He needs the classic pattern to carry on. On the other hand, Mian Sahib is saying that don’t vote the independent candidates. To make an honest yet cruel observation, PPP is history in Punjab, and for Zardari, the hope rises from the independents.

On the face, Zardari’s plea has a substance in charging Mian Sahib. When he was leaving the President House at the end of his tenure, Mian Sahib, as Prime Minister, invited him to give him farewell. It was nothing but an embarrassment for Zardari that the only main guest invited was Dr Qadir Magsi. Zardari narrates that it was to tell him that his stature offsets to Magsi. Besides, there are so many things one can count here, such as when Mian Sahib went to the Supreme Court to file a petition for sedition charge in the Hussein Haqqani scandal. Zardari says that Mian Sahib consented his stand against the establishment, but later betrayed him. It was Mian Sahib who unleashed the NAB to investigate and grill the Sindh government. When the Sindh government was virtually crippled due to the invasion of NAB and Rangers, the federal government was dancing to the tune. Zardari was forced to live in Dubai for two whole years.

Zardari is too pragmatic in formulating his policy and strategy. He takes stock of the ground realities first. Only then he makes his moves. He is not the legitimate leader of the party. He derives his legitimacy from his children as they are the Bhuttos. His first passion is for money and business. Whereas, the Mians are old businessmen. Both of these families have made fortunes out of politics. And indeed, they are at the same time much committed to the democracy.

It is now clear from his present political position that Zardari is parting away from the democratic forces. He is contained in the constituencies where electable are elected. It was, however, not the fact until recently. In every constituency in rural Sindh, many feudal lords were unable to win without PPP’s support. And now this is also history. These feudallords can win if the state machinery is with them, which still makes Zardari important but differently. He has the leverage to keep the lords with him as he is still in power. The bureaucracy of Sindh is under his influence. These lords know that well. Also, the lords and the bureaucracy know well that if Zardari is not establishment-friendly, he is not anti-establishment either. In the past, the lords knew that even if Benazir was anti-establishment, they needed her support to win elections.

Also, despite being the vanguard of democracy, PPP has not been able to improve conditions in Sindh. On the other hand, Punjab has been transformed, at least economically if not socially.

It can be argued that Zardari is doing what the devils do at the ground zero realities. He is never at the side of history like Bhuttos. But still, there is an un-ending course of politics a head. No one knows yet. A hero can be a villain again. Mian’s track record is unreliable too.