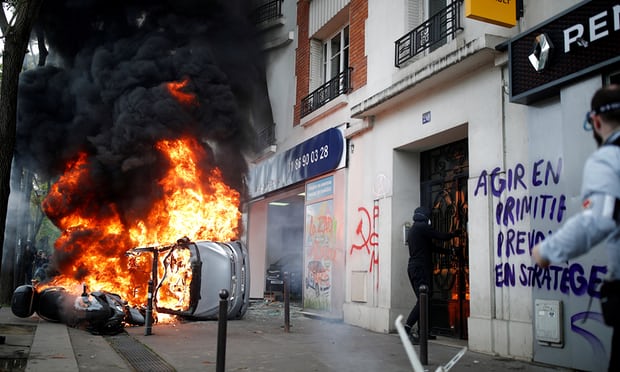 Anti-capitalist protesters torched a McDonald’s restaurant and clashed with police in Paris on the fringes of a May Day rally in Paris Tuesday.

Shouting slogans such as “Rise up, Paris” and “Everyone hates the police”, over 1,000 youths with black jackets and face masks joined the traditional union-led demonstration for worker’s rights, AFP journalists reported.

Some carried placards with the Anarchist symbol and banners with references to the far left “black bloc” protesters who regularly clash with police at international summits.

Along the route of the march they looted and set fire to a McDonald’s restaurant and also torched a car, a mechanical digger and a scooter. The police used tear gas and water cannon to try disperse them.

At least two people were arrested over the unrest, which comes at a time of heightened tensions over President Emmanuel Macron s reform of the public sector.

“Macron makes us mad,” read a banner held by one masked demonstrator.

Trade unions had set out to try rally workers on May Day against Macron’s reforms of state rail operator SNCF and public universities, which they see as part of a rollback of France s cherished public service.

Tens of thousands of people took part in marches nationwide, including over 20,000 in Paris, the police said.

Some of the participants took aim at Macron’s fiscal policy, seen as favouring business and the rich over the working- and middle classes.