Why the 18th amendment matters

The recent debate over the significance of the 18th amendment has received mixed views and questions from various quarters. Nonetheless, the debate is important given the difficult constitutional history of the country.

The debate took place in the aftermath of COAS General Bajwa’s informal discussion with some journalists wherein he expressed his reservations over the ‘unfeasibility’ of the amendment.

As the comments started to stir obloquy, the DG ISPR tried to explain what the comments actually meant by pointing out that the COAS had only raised his reservations from a security point of view. The amendment was passed by the National Assembly of Pakistan on April 8, 2010, removing the power of the President of Pakistan to dissolve the Parliament unilaterally, turning Pakistan from a semi-presidential to a parliamentary republic, and renaming North-West Frontier Province to Khyber Pakhtunkhwa. It transferred significant powers to each province.

Contrary to the long-held integrationist perspective that stronger provinces lead to a weaker centre, the 18th amendment has strengthened the federation, and has increased the participation of smaller regions in the mainstream politics. This does not mean that the amendment resolved all conflicts and issues of the provinces, but it certainly was a step towards a federal Pakistan. The revenue sharing formula is now viewed with more assiduity due to the larger geo-political scenario in the region.

The formula has left an unprecedented amount of funds at the disposal of all provinces despite population carrying still the greatest share in the revenue distribution. In this context, the money left with the centre after the disbursement of divisible pool to the provinces has been greatly reduced. This has made matters undesirable for the security establishment given the fact that the Trump Administration has withheld the Coalitions Support Fund in recent months. All of this has accumulated in the shape of added pressure on the centre to accommodate the rising security expenditure of the country. Moreover, the weak macro-outlook of the country would further contribute to the problem in the immediate future. 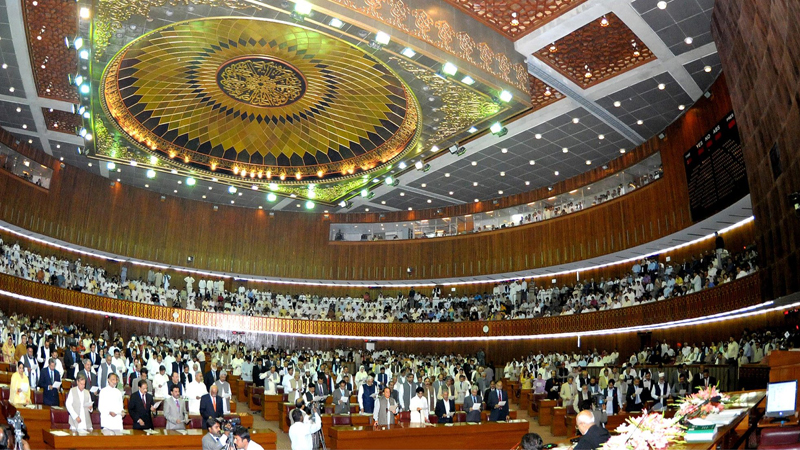 In this context of monetary constraints, voices have been raised to scrap BISP that has an expansive outreach to poverty-stricken regions in Pakistan. The program is not perfect but it is a sort of relief for the marginalised strata of the society. The same contention is visible about other developmental programs/projects. The different point of views around this and other developmental/infrastructural projects led to a public exchange of statement between the COAS and Ishaq Dar, the finance minister of the time, in the recent past.

There are two arguments raised against the 18th amendment that in my view are valid objections. The first argument is that the amendment should have been enacted before the announcement of 7th NFC Awards and not after it; the second part of this argument questions the lack of governance capability in the provinces (specially the smaller ones) to efficiently run the devolved ministries. The other argument is that the vision of the amendment was to take the state institutions and government to the tertiary level (local government). It turns out that the power elite who are connected to or at the core of almost all parties find this final step in governance against their vested interests. Therefore, we saw the resistance to local government elections in Punjab or Sindh or the current lack of funds devolution in all the provinces.

Contrary to the long-held integrationist perspective that stronger provinces lead to a weaker centre, the 18th amendment has strengthened the federation, and has increased the participation of smaller regions in mainstream politics

The tertiary level of government is vital for representative democracy as well as federalism. It is indispensible for making the state institutions accessible to the people and making governance participatory. Moreover, when organizational and governance structure of local government is properly built at the lowest level, it can help push back the excesses of non-representative institutions and against their formal and informal influence over policy making beyond their domain. In the current governance model, the local governments are dependent on provincial governments and are not able to exercise their power and authority vis-à-vis district bureaucracy. The structure of governance, as a result, remains non-representative that gives a lot of space to be exploited by the civil and military bureaucracy.

There are some other dynamics emerging out of 18th amendment. For example, the Punjab government contributed a substantial amount of funds for the on-going fencing of the Pak-Afghan border as confirmed by DG ISPR. This may be unprecedented as the federal institutions seek budgetary allocations from the central government in most cases. But, due to the increase of divisible pool, the federal government has a reduced budget at its disposal.

In the overall view, it would be an injustice to the smaller federation units if attempts are made to back track these steps. It is no way to assert, here, that there aren’t any gaps in governance through the devolved departments. The current incapacity of any provincial arm of government to carry the fruits of devolution to the citizens can’t be used as an excuse to reverse everything as the federal government couldn’t achieve much when it had the concentrated power and authority before the 18th amendment.

In the light of factionalised politics and emergence of multiple forces, it is unlikely that any single party would win large number of seats and we are likely to have a coalition government. Because of this, any attempts to amend the constitution are unlikely to succeed.

The writer is MPhil in Peace and Conflict Studies. He can be reached at bthsheh@gmail.com