World now waking up to true potential of CPEC: PM

* Abbasi says Pakistan pursuing the initiative on principles of economic viability and environmental sustainability * Ahsan says China invested billions of dollars when no one was willing to invest even 10 dollars in Pakistan * Yao Jing says Pakistan is, was and will remain China's partner and trusted friend in years to come 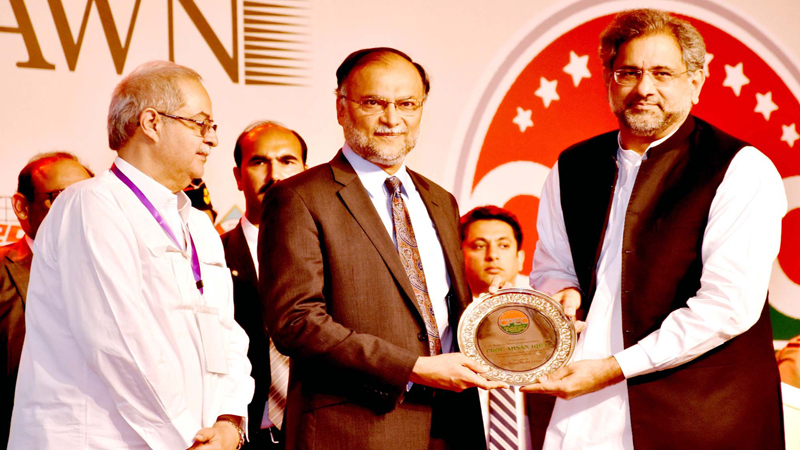 KARACHI: Prime Minister Shahid Khaqan Abbasi Monday said that China-Pakistan Economic Corridor (CPEC) is the project of generations and that Pakistan is perusing the initiative on principles of economic viability and environmental sustainability.

Addressing the participants of opening session of the CPEC Summit and Expo 2018, the prime minister said that project aims at not only Pakistan’s prosperity but will also enable neighbouring countries like Afghanistan and Central Asian countries to benefit from the trade route. He said that CPEC was almost an unknown name a few years back which had now turned into a reality that is evident from road infrastructure development throughout out the country. “Thar Coal and many more energy projects under CPEC have already been completed or are near completion,” he added.

The prime minister said CPEC projects are being built on two basic principles of economic viability and environmental sustainability, adding, “We will never compromise on these principles.” CPEC is also providing a platform to build many other side projects relating to technology, agriculture and logistics, creating a chain reaction to lead Pakistan on the path of prosperity, he said. Some neighbouring countries including Afghanistan were initially suspicious and critical of the project but are now seeing and realizing the benefits of the CPEC, he said.

Interior Minister Ahsan Iqbal said that CPEC is key to Pakistan’s prosperity. He said that in this era of disruption, Asia is new engine of growth and Pakistan has a great opportunity to emerge among the leaders due to its strategic location. “On July 5, 2013, Pakistan signed MoU with China to start CPEC journey and within couple of years it transformed into an investment portfolio of USD 46 billion,” he said.

“China trusted us and invested billions of dollars when no one was willing to invest even 10 dollars in Pakistan citing security issues in the country, citing instability,” the minister said. Around 80 million people belonging to the middle class are residing on CPEC routes and the corridor has already started to provide numerous opportunities to them to increase their income and quality of life, he said.

Chinese Ambassador in Islamabad Yao Jing said that China is celebrating 2018 as 40th anniversary of China’s policy of opening up and reforms. “Over these 40 years, Chinese government and people have made efforts to improve the country’s economy and we managed to have an average annual GDP growth rate of 9.5 percent,” he said. China has managed to adopt a great mix of socialism and market economy and is sticking to openness and inclusiveness while working hard to promote cooperation with the countries all over the world, he added.

The ambassador said that CPEC is a significant project for not just Pakistan, China and neighboring countries but for the whole world in terms of the business opportunities it provides.