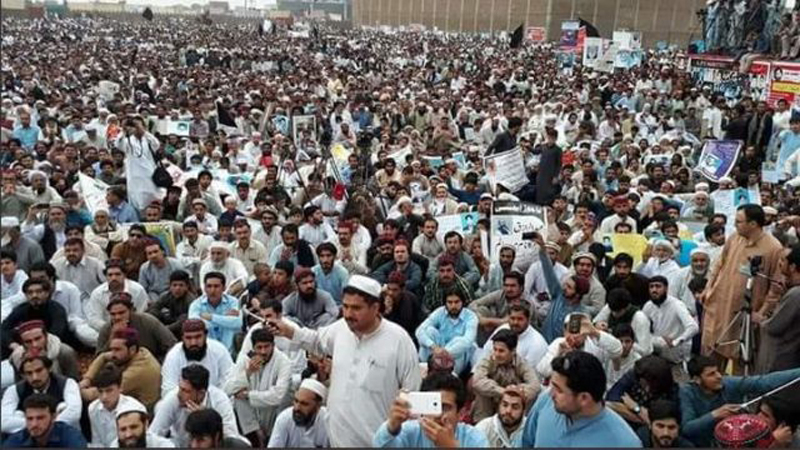 LAHORE: The Pashtun Tahafuz Movement (PTM) leaders Ali Wazir, Bilawal Mandokhel, Muzammil and Ismat Shahjahan among others have been arrested by police in Lahore.

According to PTM member and lawyer Mohsin Dawar, the leaders who had come to Lahore to hold a public meeting – which was not approved by the local administration – have been arrested.

Punjab Police has arrested Ali Wazir and other friends of PTM.

Video footage of the arrest

The reason for the arrest has not been mentioned yet. Supporters of the PTM have taken to Twitter to condemn the move and have requested Punjab Chief Minister to look into the matter.

@CMShehbaz strongly condemn the @GovtOfPunjab crackdown on peaceful workers and leaders of #PashtunTahaffuzMovement
Denying them the right to assembly is dictatorial, not democratic#DaSangaAzadiDa #PTM https://t.co/B26vWt1gSn

This is highly condemnable and Punjab Govt should release all PTM leaders and activists. A peaceful movement should not be dragged to corner. Pakistan has already seen much violence. Instead of opening doors we are shutting them for Pashtuns of FATA.#ReleasePTMActivists

Earlier today, citing security concerns, the district administration in a letter written to Muhammad Ali of the PTM refused the request to hold a public meeting at Lahore’s historic Mochi Gate.

The parties involved in holding the meeting claim they were informed about the decision on Friday night.

The PTM planned to hold its public meeting, titled ‘Jalsa Raddul Fassad’, at Mochi Gate on the 22nd of April.

The PTM claimed that it would use the meeting to highlight the challenges and hurdles the Pashtun community faces and asked Lahori and Punjabi residents to support them in their movement.