Bring the Pakhtun narrative into the mainstream

The Chief of Army Staff’s (COAS) comments criticising the Pakhtun Tahafuz Movement (PTM) — an entirely organic movement demanding the protection of rights and liberties of the people most affected by terrorism — echoes the comments of right-wing conspiracy theorists such as Zaid Hamid and others on social media.

Accusing the protests of being engineered and undermining country’s sacrifices has absolutely no bearing on reality; historically, such allegations have always been the mantra and political tool of the establishment.

But it is even more problematic when the head of the armed forces makes such statements publicly. One of the reasons being the source of the statement itself: military. It is not army’s job to comment on political matters.

The public does not find this strange; in many circles, the people are always waiting for him to weigh in on every issue in or outside the country. PTM has no bearing on the security of the country, which is why the armed forces should welcome an organic movement that looks to bring the Pakhtun narrative into the mainstream.

Not all dissent is counterproductive to the progress of the country; asking for transparency and accountability will only lead the country towards improvement. Besides, the state has allowed other, more malicious groups to take to the streets; when it looked the other way while religious hardliners were rampaging on the streets, for instance. Unlike those instances, this movement is entirely peaceful and is looking to protect the rights of Pakistani citizens, instead of curbing them

The Army’s countless sacrifices in the elimination of terrorism in the country must always be remembered, and its heroes respected, but the lives of the Pakhtun civilians caught up in the conflict are equally valuable and must be accounted for. After all, civilians are the ones the armed forces are fighting so hard for. A non-violent protest that is not defying any laws in the constitution and only asks for basic rights alongside an end to enforced disappearances is not something to be condemned. On February 26, according to a report on Dawn, the Supreme Court was looking into the missing persons case, and it observed that the victims were ‘victims of terrorism and deserved subsistence.’ Do they not also deserve justice?

Not all dissent is counterproductive to the progress of the country; asking for transparency and accountability will only lead the country towards improvement. Besides, the state has allowed other more malicious groups to take to the streets, when it looked the other way while religious hardliners were being rampaging on the streets, for instance. Unlike those, this movement is entirely peaceful and is looking to protect the rights of Pakistani citizens, instead of curbing them. 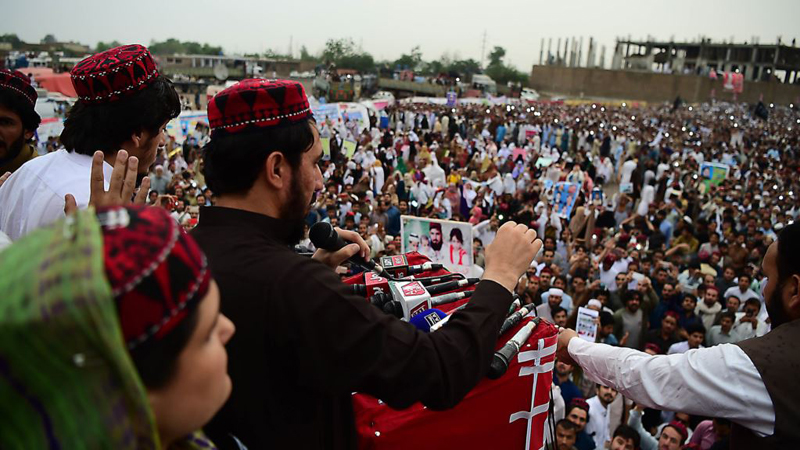 The overreaction to the movement and anyone who speaks in its favour is both unnecessary and over-the-top. A university professor from Punjab University has lost his job, three university events have been cancelled, and a media blackout has been ordered, as if this is the most pressing threat to the stability of the country. The state has only put itself in an uncomfortable position; is it willing to go this far to stifle discussion on any issue that might make the public question the rosy picture being painted by the state. Censorship is only adding to the legitimacy of this movement.

And this is where the line should be drawn; if the state wants to ensure that people do not talk about this, more and more should, because that’s what is right. Inalienable rights of human beings in a democratic state are to be safeguarded, and if the state is showing signs of faltering in its path to do so, the people must hold it accountable. It is up to us to work towards building the country we want, and one that does not have space for discussion is incomplete. PTM is evidence of this, because what they want is for the betterment of the whole country.

Claiming that they are driven by an agenda is not too far of the mark, however, it’s not as sinister as some would have us believe. PTM is on the right side of history, because its demands will make Pakistan a better place to live for all of its citizens, regardless of ethnicity or geographical location. That is the only drive or agenda they possess and there is nothing hidden about it. Citizens should speak up when communities are marginalised and they do not have to be sponsored by foreign intelligence agencies to do so.

Institutions that look to keep the existing power structure in place must also admit to the legitimacy of the demands instead of dismissing them outright. Accountability needs to be implemented across the board, and addressing the concerns instead of veiled threats from power brokers of the country is the way forward.

The writer is a former newspaper staffer. He tweets @zahaidrehman