‘Ghalib: Innovative Meanings and the Ingenious Mind’ — an important milestone 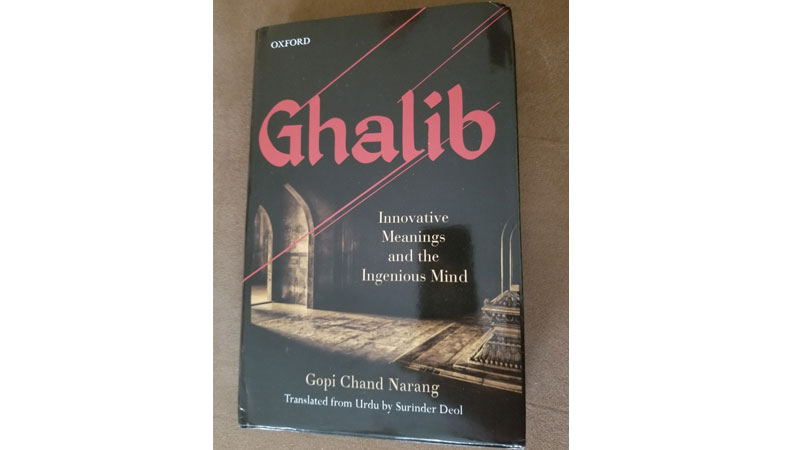 In the Preface to his book, Dr. Gopi Chand Narang says: “Ghalib’s poetical construct supports unqualified freedom of the human spirit. His dialectical discourse is an indication of the fact that human existence is paradoxical and multidimensional. Quantum Physics has dealt a blow to many beliefs of the past. There is a new language of paradoxical grammar and language of silence (‘thought beyond the words’). In Urdu languages, there is no finer example of this than Ghalib’s dialectical thinking and his self-illuminating poetry. ”

True, indeed, is Dr. Narang’s summation of Ghalib’s method of using the paradoxical mystery of being and becoming in Ghalib’s verse. Dr. Narang wrote this book originally in Urdu, a couple of years back. It has now been translated into English by Surinder Doel—who has himself published a translation of Ghalib’s chosen couplets. Thus, there is a conjunction of two minds at work and the result is indeed excellent. I believe that this magnum opus of Dr. Narang would go a long way in making common lovers of poetry who have read Ghalib in English translation alone and the literati who are sanctimoniously attached to English as their source of knowledge.

I had read the original Urdu version of this book because while he was writing it, Dr. Narang was staying in USA and we talked on phone almost daily. The original, let me say it plainly, is rather a treat to read but what is a joy in Urdu becomes rather prosaic in English. While Mr. Doel has done his ultimate best in keeping the soul of the original intact, there is no comparison between the original Urdu prose of Dr. Narang and the English translation which could be the second best, at the most.

‘Ghalib is a worldly poet whose main concern is the condition of a human being. He is caught between the joys and sorrows of life while facing the challenges of living in a mysterious world abandoned by its Creator’

Ghalib and his English readers

Encyclopedia Britannica has ceased publishing its print editions now but even when it was published, it paid scant attention to anything not akin to Europe in general and Great Britain in particular. Those who suffered from this neglect, in particular, were great names from the ‘Orient’ or the ‘East’ in terms of present day parlance. One looks at what was written about Ghalib (till 1975— when it creased its print editions) will show what importance it gave to the most important name in Urdu poetry.

Extract from Encyclopedia Britannica that remained without revision from the birth of its print edition to its demise:

Written by the editors of Encyclopædia Britannica”

“Mirza Asadullah Khan Ghalib, (born December 27, 1797, Agra, India—died February 15, 1869, Delhi), the preeminent Indian poet of his time writing in Persian, equally renowned for poems, letters, and prose pieces in Urdu. Born into an aristocratic family, Ghalib passed his youth in luxury. Subsequently, he was granted a small pension by the British government but had to struggle against penury and hardships. Recognition finally came in 1850, when he was appointed poet laureate to the last Mughal emperor, Bahadur Shah II. Ghalib’s best poems were written in three forms: ghazal (lyric), mas¯navi (moralistic or mystical parable), and qa?idah (panegyric). His critics accused him of writing in an obscure and ornamental style of Persian incomprehensible to the masses. His verses affirm God’s omnipotence while questioning the misery of the phenomenal world.”

Ghalib was put on back shelf for half a century

During one hundred years after his death, Urdu flourished apace, but not much attention was given to Urdu literature by the upper middle class, even the Urdu knowing Muslim community chose to regard English as a sure ladder to success in society. Thus Urdu-wallahs (Urdu-speaking) never forgot their Ghalib, while ‘Desi Sahibs’ chose to steer away from anything smacking of Urdu. To them, from Shakespeare to Wordsworth, Keats and Byron, and from the dried-up sweetness of the Romantic poets to T. S. Eliot and Ezra Pound was something to talk about in club houses and drink parties rather than Ghalib or Meer. Thus, Ghalib was put on back shelf for almost half a century after the 20th century dawned.

Now, it seems the trend has been reversed. This reversal started in mid-twentieth century during the celebration of Ghalib’s death centenary. Not only were translations of Ghalib’s assorted couplets done, both for literary magazines and for the print media, but books on multifarious aspects of Ghalib’s puzzling and perplexing imagery, abstruse and refractory referential roots were written. This trend multiplied more in India than in Pakistan where interest in Ghalib was, sometimes in part and sometimes totally replaced by scholars’ interest in Iqbal who was their new-found poetry icon. In India, however, textual studies of Ghalib’s verse well-nigh exceed any other Urdu poet of the classical period.

It is in this sense that Dr. Narang’s book is the latest and the most valuable contribution to this slim corpus of critical literature on Ghalib. Using not only the tools of conventional textual criticism but also sharp and well-defined neo-critical exploratory linguistic devices, he has dug up much that had been left by Ghalib’s erstwhile biographers and critics whose trend was set in late Nineteenth century by Altaf Husain Hali. To understand the essential Ghalib, Dr. Narang’s book, within two years of its publication in Urdu, has become the hall mark of work done at the metaphysical level or as an approach to a new cogno-scenti spirituality or polymathic metaphysics that Ghalib followed.

This short write-up would be well-nigh incomplete without some quotable quotes from the book.

Referring to Kabir’s poetry and his ‘language of silence’ and how and in what degree it changed from him to Ghalib’s chief source of enlightenment, namely Bedil, the poet of transcendental Sufism, Dr. Narang writes:

“From Bedil, the path to Ghalib is pretty discernible, but Bedil is a transcendental Sufi poet, while Ghalib is a worldly poet whose main concern is the condition of a human being. In Ghalib we find that mysticism and transcendentalism of the saint poets mesh into an existential poetic concern of its own kind. He is caught between the joys and sorrows of life while facing the challenges of living in a mysterious world abandoned by its Creator. This the place where Ghalib’s voice consciously or unconsciously is at home using the archetypal negative dynamics found in the ancient Indian and Buddhist traditions.”

The ‘Domni’ drool: Is it true?

Dr. Narang amicably brings about the meeting point between Ghalib’s romantic interlude (when he was just nineteen years old) that effected his creativity and brought it to bear upon his intellect and poetics. Was it a professional tavaaif, a ‘domni’— the silent affair with whom resulted in the lady’s demise? This quote is from page 189.

“….We know one thing for sure that when Mirza was 13, he was asked to marry Umrao Begum who was 12 years of old……It is just possible that during the wedding celebrations, Mirza was attracted to an enticing female singer. We do not know anything about this romance. On the question whether she was a singer, dancer, or a sophisticated tavaaif, Malik Ram says that the word ‘domni’ lent itself to different interpretations. It appears that she was not an ordinary professional woman because she had cultivated taste and the knack of poetic appreciation. Unfortunately, this obsessive affair ended tragically when the woman committed suicide.”

Dr. Narang has pin-pointed couplets that obliquely refer to Ghalib’s sense of guilt in this affair. No names have been mentioned but these verses belong to the same period when Ghalib used his first pen-name ‘Asad’ and the fact that these verses were not included by him in his divan but were appended by his biographers in the Bhopal manuscript.

Was indeed this mysterious lady who took her own life a Shia or a Sunni? Not much is again known but two of Ghalib’s couplets may refer obliquely to it.

We can gauge the depth of the shock that Mirza suffered on the poor girl’s suicide that he recalled the incident in his letter he wrote to Hatim Ali Beg.

Ghalib’s age was between nineteen and twenty-one at this important juncture of his age. He wrote: (translated from Urdu). “We Mughal lads are outrageously passionate. If we fall in love with someone, we really kill her without love. I am also a Mughal. In my life I too afflicted a domni with my love. May God bless the lovers and the two of us because we have experienced the wound of the loss of our loved ones! This happened nearly forty or forty-two years ago. Although I am not into this game anymore and I no longer possess the skill of managing a love affair, I do remember her and her enchanting ways, I will never forget all my life how she died.”

The book is dedicated to the memory of Jameeluddeen Aali—a descendant of Lohari family and a guardian of Ghalib’s literary and cultural legacy. It is published by Oxford University Press, New Delhi.