Chowk Wazir Khan — the revival of a 17th century wonder 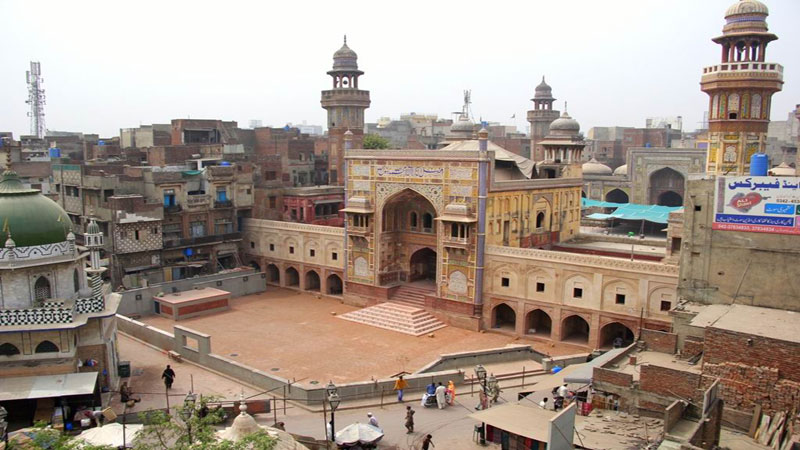 You all must be familiar with the jewel of Lahore, the Wazir Khan Mosque, but have you ever noticed the beauty of its outer quad, the chowk? ‘Chowk’ is a local language word and it is translated as a market area, a courtyard, a road junction or a roundabout where some streets meet. Chowk was an important feature during the town planning by the Mughals and usually the mosques of Mughal era had a chowk. From Delhi Gate Lahore, taking the road to the Royal Trail and then the straight passage passing through the colorful bazaar will lead you to this chowk across Chitta Gate. A giant mosque with sky touching minarets will appear before you with a huge quad outside it, the chowk. Do you think it was the same two years ago?

In older times, the chowk was the hub of cultural activities and social gatherings. There were foods and other temporary stalls selling various cultural items. With the passage of time, the use of the chowk got changed and encroachments began. The open space once meant for social gatherings became a car parking and levels of road on northern side and eastern side of mosque were raised. The hujras (chambers) and shops of the mosque became occupied by the welding vendors and one would find heaps of debris around the beautiful mosque. The open space that was once the centre all the hustle and bustle of the walled city was completely damaged and the chowk became a commercial hub. Seventy three encroachers seized the beauty of the place. While passing by, one could never figure out that where the mosque was. It seemed as if the mosque and its splendour were lost forever. The access to the grand mosque was obstructed and the centuries old heritage seemed lost.

During Mughal era, the chowk was the hub of cultural activities and social gatherings

In 2012, Walled City of Lahore Authority (WCLA) got Chowk Wazir Khan cleared. With the help of Aga Khan Trust for Culture, the conservation of the chowk was planned to revive the beauty of the mosque and the famous chowk. With the funding of US Ambassador’s Fund, in 2016, the conservation of the chowk began. The welding vendors occupying the hujras were relocated and hujras were restored. In the conservation process, the consolidation and repair works of the mosque structure— repairing of shops and hujras, and restoration of the original floor levels of Shah Jahan period in front of main entrance of the Wazir Khan Mosque were planned. For the purpose of conservation the excavation started and a few test pits were dug initially on the basis of which it was decided to conduct a proper excavation. Before the excavation of the outside area of mosque, it was planned to dig two soak wells for disposal of rain water on extreme ends of the chowk in southeastern and north-eastern corner of the area. During the excavation, the floor was much damaged. After further digging, human skeletons were also found which indicated that place was once a graveyard as well. The pottery found during excavation included rims, utensil, small and medium sized pots, oil lamps and jars.

Finally, the conservation was completed in 2017 and the chowk was given back its lost glory. On the Royal Trail, this is the only open space having a capacity to accommodate more than four hundred people at one time. The interesting aspect of this chowk is that it reflects religious harmony. This chowk has the Wazir Khan Mosque, Shrine of a Sufi Saint Hazrat Said Souf and an eccentric well of Diwan Dina Nath who was the finance minister of Maharaja Ranjit Singh. Around the chowk you can also see the colorful cloth shops of Asia’s biggest cloth market— Pakistan Cloth Market, dhol and dhamal being performed and there are several food stalls. So many wonderful spectacles together in one chowk are hard to find anywhere in Lahore. With the conservation of the chowk, cultural evenings and gatherings have also started there which include qawali, sufi kalam, dhamal, dhol, whirling dervesh and several local religious ceremonies. Every Saturday you can come to this chowk and enjoy a different flavour of culture. The local community of walled city is also enthralled by these activities. 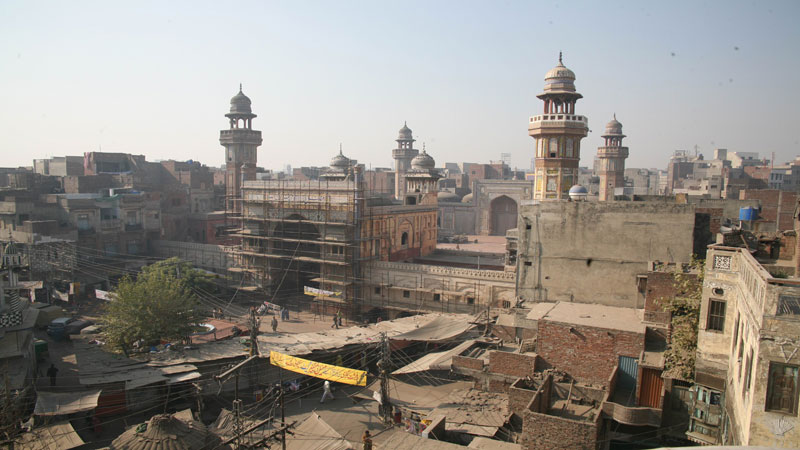 Coming to the history of this place, the mosque along with this chowk was built by Hakeem Ilm Ud Din Ansari, known as Wazir Khan, during the reign of Mughal Emperor Shah Jahan. Wazir Khan chose this site for the construction of the Wazir Khan Mosque because it was a central place of Lahore at that time. The foundations of the Mosque were laid in 1634. Another interesting thing about this chowk is that it once had gates on its four sides, and very few people know this. The eastern one was known as Chitta Darwaza because it was plain and devoid of embellishments. Presently, the Chitta gate does not stand at its original place. It is a historical fact that it was destroyed by Sikhs before the rule of Ranjit Singh during a fight against the Qassaban (the butchers), who lived inside Delhi Gate. It was later erected by the Britishers during their rule on the sub-continent, but it was not laid at its original place. The Chowk Wazir Khan, which was called Jilaukhana by Mughals, was connected through perpendicular passages to various parts of the city because it was the centre of the city. I am glad that this piece of history is revived to its original glory and now is now a tourist hub.