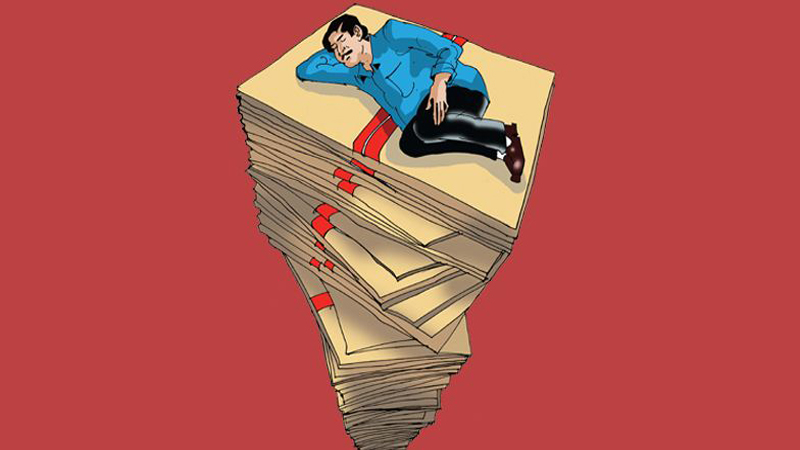 Red tapism refers to excessive regulation or rigid conformity to formal rules that is considered redundant or bureaucratic and hinders or prevents action or decision-making.

These redundant and unnecessary procedures lend credence to inefficient officials who take bribes for services that are supposed to be free.

Red tape may be frustrating, but it sometimes provides social benefits. Red tape does not spring up because of the malevolence or incompetence of bureaucrats or other officials but because of two compelling and interrelated reasons: to ensure that government processes are representative and accountable and to meet the demands, often fragmented, of citizens and interest groups.

In common usage, red tape has a strongly negative tenor and most laymen would, in all likelihood, be unable to make much sense of the notion of beneficial red tape. In popular parlance, red tape has come to be an umbrella term covering almost all imagined ills of bureaucracy.

In Pakistan, we have experienced red tapism at several stages. It exists in every level of the bureaucratic hierarchy, be it government sector or private. In most cases, the officials would demand bribe.

However, it is important to hearken back and trace the origins (and reasons) of red tapism. Contrary to common misconception, money is not the only reason why it exists. Certain other intangible reasons, such as jealousy, inefficiencies and unprofessionalism also contribute to it. But regardless of these plausible reasons, it certainly is a frustrating disservice to people

Just look at the online land record system in Punjab. Despite the claims by government that land records have been computerized, and one no longer needs a patwari, no one can get the ‘fard’ of their land without the involvement of patwari. And this happens in every department.

Although bribery may speed up individual transactions with bureaucrats, both the sizes of bribes and the number of transactions may increase so as to produce an overall net loss in efficiency.

For citizens to get a license, certificates and any other legal document from the government, a number of steps must typically be completed, involving visits to several offices, standing in queues, making different payments, etc. As long as the costs for getting the document are smaller than the benefit obtained, individuals will optimally choose to get it. The lower the costs, the better off individuals will be. Importantly, any reduction in the costs will make available a surplus that would otherwise be lost, for instance in queuing, waiting, going between different offices, etc., as well as on the extensive margin where some individuals possibly switch from informality into getting the document.

Consider bureaucrats and other officials that are interested in capturing the surplus associated with reducing license costs. Apart from legitimate document fees, individuals face other costs, such as monetary costs for transport, and time costs of queuing, waiting and going to the offices. It is bureaucrats’ removal of such time costs, against payments from individuals. We refer to the reduction of such time costs as “speed money corruption” for which individuals pay bribes to officials. Paying a bribe to speed up the handling of the procedure is a typical example of the first category. It is important to note that exposure to bribes solicited to accelerate the process.

Individuals can obtain a document in three ways: through the regular procedure, by ‘direct’ bribing, which eliminates some time costs, or through intermediaries, which eliminates all time costs. Intermediaries, which in turn pay ‘indirect’ bribes to bureaucrats or officials, maximise profits from document fees, and the officials maximise profits from direct and indirect bribes.

It is hypothesized that bureaucrats deliberately create extra bureaucratic hurdles, or red tape, to extract bribes so they use the intermediaries. Different types of bureaucracy intermediaries are common throughout the developing world. The existence of intermediaries in Pakistan cause the red tapism, they are commonly known as brokers, touts, agents, scribes, consolidators, helpers and barkers, within and outside the bureaucracy. By frequent interactions, these ‘touts’ learn how to handle the procedures at the government offices and can solve matters faster than a particular individual. Processing many applications at the same time and having personal relations with bureaucrats are additional reasons why ‘touts’ possess a ‘superior technology’ and cost advantage. These touts can also be called ‘One Stop Shops’.

Dishonesty, corruption and bribe can occur on various scales, in many shapes and forms and at all levels within public offices. It is the abuse of authority by public officials for personal gains and red tape is one of the best way to do so. One manifestation of this is when state appointed bureaucrats exploit their powers of discretion, delegated to them by the government, to further their own interests by engaging in illegal, or unauthorised, rent-seeking activities. Red tapism has become the need of the government officials for corruption and bribery.

Bureaucratic or officials corruption is an inevitable product of the administrative machinery of state intervention. In many areas of economic activity, private individuals must comply with various rules and regulations that are costly in terms of time and effort, efficiency and productivity. These institutional hurdles the red tape of bureaucracy; provide an opportunity for rent-seeking as individuals may be willing to pay bribes to circumvent them. It has been argued that, because of this, corruption may actually do more good than harm.

‘Speed money’ hypothesis, the argument contends that bribery can be a means of improving efficiency by helping to overcome cumbersome regulations that create obstacles to doing business.

Conceptually, there are at least two main problems: first, although bribery may speed up individual transactions with bureaucrats, both the sizes of bribes and the number of transactions may increase so as to produce an overall net loss in efficiency; second, and more fundamentally, the distortions that bribes are meant to mitigate are often the result of corrupt practices to begin with and should therefore be treated as endogenous, rather than exogenous, to the bureaucratic process.

It is possible that red tape has some positive social value, though the reasons are not yet very well understood. One argument is that it may function as a screening device to reveal information and to improve outcomes in otherwise unregulated markets. Another is that it may serve to contain corrupt activity by limiting the scope for discretion and favouritism on the part of bureaucrats through complex rules and procedures.

I agree that cutting government red tape alone will not eradicate corruption, especially if you have a political system without checks and balances to help keep the government honest. To fight against corruption, we need genuine democracy, a free and optimistic media, an independent judiciary and an effective law enforcement, which help stem abuses by corruption and red tapism.

The writer is PhD Scholar in Media and Crime and can be reached at fastian.mentor@gmail.com