And since all these military actions are unfolding in our occupied lands, Azerbaijan reserves the right to react by military means

Two years have passed since the day of the ‘four-day war’ that begun between Armenia and Azerbaijan on the night of April 2, 2016, which turned out to be the most bloody since the cease-fire came into force on May 12, 1994.

How did it all start? It began with the fact that the Armenian armed forces, which in all possible ways have been trying to disrupt the peaceful negotiation process for more than 20 years by shelling the positions of the Azerbaijani armed forces, this time staging a massive artillery attack on the inhabitants of the front-line regions of Azerbaijan, as a result a whole family in Terter region has died.

Taking into account the fact of the death of the whole family and the location of the enemy’s firing points on the hill, which created favourable conditions for the constant shelling of Azerbaijani settlements, an order was given to drop the positions of enemy forces away from populated areas. I should note that the Ministry of Defence of Azerbaijan did not set itself the task of launching a full-scale war or making a blitzkrieg in order to return the occupied territories — Nagorno-Karabakh and adjacent areas, since during the counter-offensive, Azerbaijan used a very small part of his army.

In Armenia, the reaction on the counter-offensive operation of Azerbaijan was as if a war had begun. A panic broke out in Yerevan: the Armenian leadership threw all its weapons against the Azerbaijani army — used its strategic offensive weapons, pulled its reserves out of Yerevan. For three days the Armenian Armed Forces attacked Azerbaijani positions. In the streets of Yerevan and various cities of Armenia, protest against the ruling regime led by Serzh Sargsyan took place, the people demanded explanations from Sargsyan for the murder of innocent civilians.

It came to the point that the Armenian side appealed to international organisations, and to various countries, so that military actions stop would soon. The Armenian leadership appealed to the relevant Russian structures to the mediation work.

For example, the Minister of Defence of Russia, General of the Army Sergei Shoigu, called the Minister of Defence of Azerbaijan, Zakir Hasanov, and said that it was necessary to stop ‘this matter’, that the country’s leadership would talk about it. General of the Army Valery Gerasimov, chief of the General Staff of the RF Armed Forces, called the Chief of Staff of Azerbaijan, Nadjmeldin Sadigov.

During the counteroffensive operation, the Azerbaijani Armed Forces managed to liberate two strategic heights — Leletepa on the Jebrail and Talish heights. During the ‘four-day war’ Azerbaijan lost 31 servicemen, the losses of the Armenian side exceeded 200 people killed and more than 500 wounded. 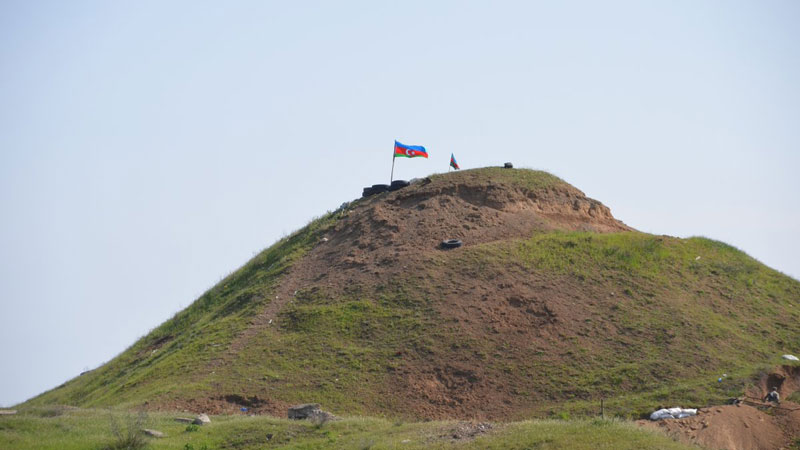 Thus, the April battles demonstrated the strength of our state and army, the unity, solidarity and patriotism of our people. During the April events, Azerbaijani youth took to the streets and held actions in support of our servicemen, expressed full readiness to join their brothers and return their occupied lands.

Unfortunately, there are a number of serious obstacles to the settlement of the Nagorno-Karabakh conflict, the first and most important of which is, of course, the Armenian factor, that is, the destructive position of the Armenian ruling regime, the non-compliance of the Armenian side with the four resolutions of the UN Security Council, threat to the efforts of the OSCE Minsk Group and Azerbaijan in advancing the negotiation process to resolve this conflict.

And since all these military actions are unfolding in our occupied lands, Azerbaijan reserves the right to react by military means if the Armenian side does not want to resolve the Karabakh issue through negotiations. I note that the leadership of Azerbaijan headed by the President, Supreme Commander-in-Chief Ilham Aliyev pays much attention to strengthening the army.

Every year the material and technical base of the Azerbaijani Armed Forces is getting better, new types of strategic weapons are becoming a part of the arsenal of the Azerbaijani army, several types of own weapons are being developed, which is the result of a far-sighted and effective policy implemented in our country under the leadership of President Ilham Aliyev. But sooner or later the war in Karabakh will begin, and when this day comes, its consequences will be much, much more disproportionate, than the ‘April four-day war’.