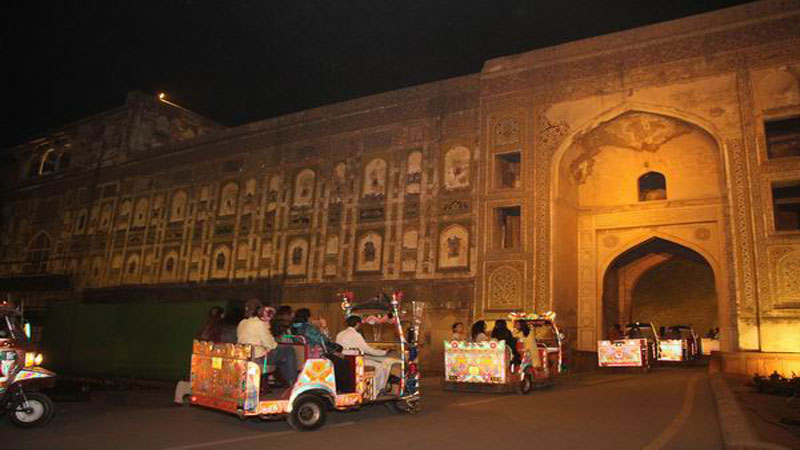 As you enter the imperial Lahore Fort through the British era built Postern Gate, you will be astounded by the gigantic wall in front of you which is 1450 feet long and 50 feet high. So now, you can imagine the grandeur and majesty of this wall. This is the world’s largest mural Picture Wall inside the Lahore Fort, and it is situated right here in Lahore, Pakistan. This wall was one of the reasons that the Lahore Fort was listed on the UNESCO World Heritage List in 1981.

The beauty of the wall cannot be described in words, and experiencing it is important to believe in its exquisiteness. The most appealing characteristic of the wall is that it deeply reflects the history and activities of the Mughals. It narrates their sports, events, cuisines, animals etc back in the time through the pictures on it. Coming to the history of this gorgeous wall that is elaborated in vivid mosaic decoration with pleasing colours on plaster base, work on it was commenced by Emperor Jahangir in 1624-25 A.D but later accomplished by his successor, Shah Jahan, in 1631-32 A.D. Most of the embellished buildings inside Lahore Fort and Lahore City belong to the Shah Jahan period, as he had a high aesthetic sense and love for beauty.

Along with the sports and pastimes of Mughal emperors, this huge gorgeous wall also exposes a variety of geometrical and floral patterns. The wall with several styles of mosaic work describes the human figures in hunting, fighting, dancing, and mythological scenes. It forms the longest mural wall in the world, decorated in fine embellishment of glazed tile mosaics. Pakistan is most definitely lucky to have such wonders, and we should cherish and celebrate these masterpieces of history. Unfortunately, not many people now know about the importance of this wall and it was a neglected piece of the Fort once. There were waist-high shrubs along one side of the wall, and it was probably also a no-go area. The tourists visiting the Fort were not very well informed about it, and so, it remained deserted.

Another marvel of this wall is that it encloses the Summer Palace and the Shah Jahan quadrangle, which includes the exquisite Sheesh Mahal and Naulakha Pavilion. The Elephant Stairs gate forms an extension of the wall and entrance to the rest of the fort. A rich historical immediate context to the Picture Wall also includes the Sikh religious building of the Samadhi of Ranjit Singh; additionally, adjacent are the Huzoori Bagh, Badshahi Mosque, and Roshnai Gate. All these sites form a complex of momentous heritage as well as religious sites of various ages and reigns in close proximity with one another. Now, you can visit all these sites in history with night tours. 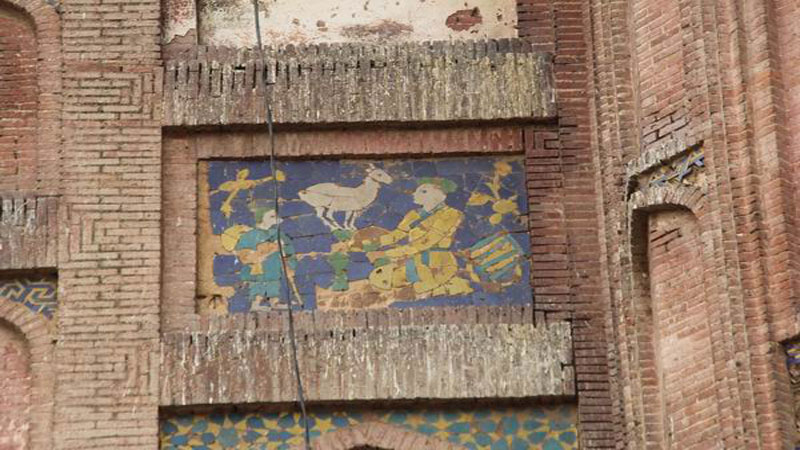 A report by Aga Khan Trust for Culture reveals that this wall was constructed of small brick masonry with lime mortar; the bricks used were a special size, specific to the Mughal period. It is also said that there are variety of decorative schemes used on the facade including the typologies of glazed tile mosaic work, filigree work, fresco painting, brick imitation work, glazed lime plaster, pietra dura work, stone fret work, cut and dressed brick work, and terracotta screens. I wonder what effort would have gone into the construction of this gigantic wall, which still stands majestically today inside the Fort.

The cries of the neglected piece of heritage were heard in September 2015, when the documentation of the Wall started with the funding of Royal Norwegian Embassy by the Aga Khan Trust for Culture and Walled City of Lahore Authority. The study was carried out using laser electronic measurement and photo- orthorectification technologies; an accurate highly detailed scaled record was created, depicting the walls present condition. This documentation was done according to high standards of precision, in compliance with the relevant international legal and technical requirements. The formal geometry of the buildings of the Picture Wall along with larger salient features in detail were depicted in architectural drawings including sections, plans, elevations, and axonometric projections. Various tests were carried out on glazed tile mosaic samples from the Picture Wall façade, to ascertain the composition and materials. These included visual investigation, x-ray diffraction test, and petro graphic analysis. The findings of these tests depicted three layers of the glaze tile and the composition of various colours being metallic oxides, including the percentage of the composition of materials as well as their relative proportions. Further on the process of manufacturing, these tiles were studied according to the original process, including the use of traditional kilns and baking the tiles. Prototypes were developed, on the basis of the research and matching the original tiles closely.

These studies led to the prototype preservation of the wall. This prototype was carried over a 45 feet high and 30 feet wide panel, on the western segment of the Picture Wall. Aga Khan Trust for Culture and the Walled City of Lahore Authority involving the experts from Italy, Switzerland, Germany, France and Sri Lanka started this process in 2016, and it was completed in December 2017. Previously, Archaeology Department Punjab also started the restoration of one part of the wall, which met with much criticism as there was no background study before the restoration. To avoid any such issues, the Aga Khan Trust for Culture and Walled City of Lahore Authority held an international workshop to analyze the prototype restoration of that panel. The purpose of the workshop was to assess and discuss the preservation work carried out on the Picture Wall. The comments of the experts gave the future plans for conservation, which now, will soon be started. 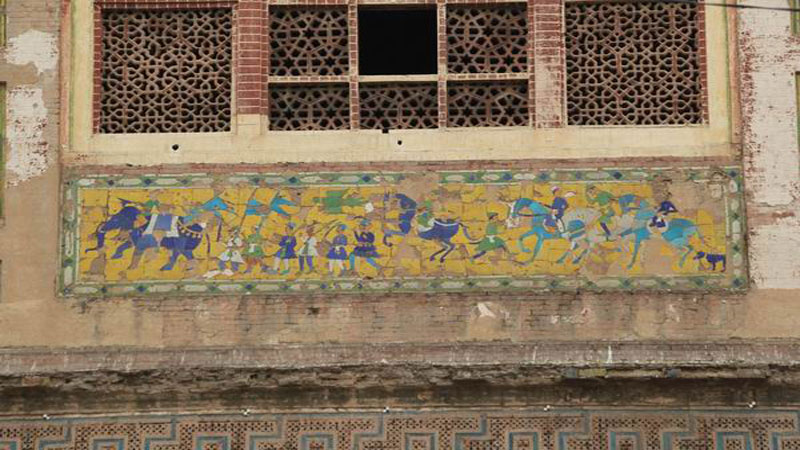 Meanwhile, one of the biggest wonders that has happened is the illumination of this wall. The entire picture wall of Lahore Fort has been illuminated with 90 lights, and this has now been made a part of the history for night tours. Tourists are having a good chance to look around the wall and get details of it from the guides of the Fort. I personally think that this has given the Picture Wall a new life and awakened the keen interest of people in this piece of art. I am happy that it has turned into a hot spot of the Lahore Fort. Because, why not? After all, it’s the world’s largest Picture Wall.