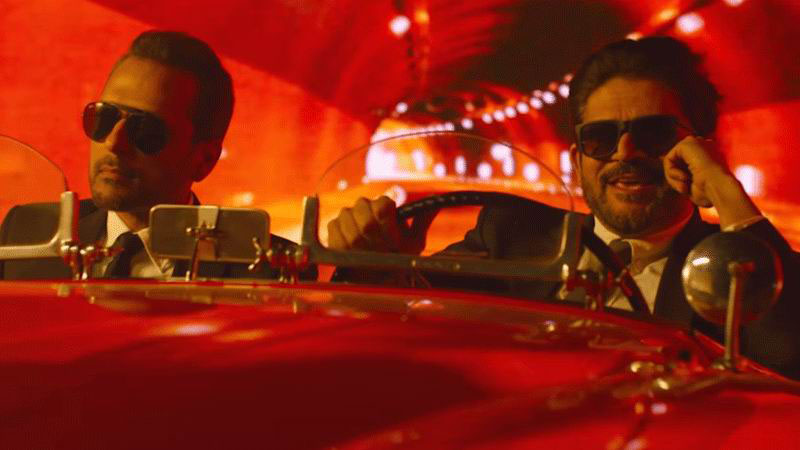 Strings needs no introduction. The band has been entertaining audiences with their music for the past 30 years. With hits like ‘Chaaye Chaaye’, ‘Dhaani’ and ‘Anjane’ under their belt and their presence felt in the international market with ‘Na Jaane Kyun’ for the 2004 film, Spider Man 2, alongside a number of songs in Bollywood, the band has a global fan following.

The band after serving as music producers for the internationally acclaimed Coke Studio for four seasons, left Coke Studio following the tenth season to concentrate on their own music. After the Coke Studio venture, there were a number of concerts that took place in different metropolitan cities of Pakistan to mark the band’s official return, with hints
of a new album dropping by soon.

On 2nd March, 2018, the band finally released a teaser of one of their upcoming songs titled ‘Sajni’. Sajni is one of the first eight songs from their upcoming album that goes with the title ‘30’, which is a celebration of the band that has existed in the Pakistani music scene for the last 30 years.

Strings was originally formed in 1988, with Faisal Kapadia, Bilal Maqsood, Rafiq Wazir Ali, and Kareem Bashir Bhoy. The students from the Government College of Commerce and Economics in Karachi gained exposure through Ghaznafar Ali’s show, ‘Music Channel Charts’. This followed the band’s signing with EMI Pakistan, having released their first and second album titled ‘Strings’ and ‘2’, under the label.

The music video is ubiquitous, in the sense that it feels like it’s way ahead of its time. Simultaneously, the use of props like the dial up phone and the red car etc, transport one back to the 1980s — the band’s early days

In 1992, following the music video release of ‘Sar Kiye Pahar’, which was directed by Bilal Maqsood, the band split up so they would be able to concentrate on their personal lives. However, ‘Sar Kiye Pahar’ turned out to be a blessing in disguise for the band, as it was one of the few Pakistani music videos to get air time on MTV Asia – a big deal back in the day. Other Pakistani music videos that appeared on MTV Asia were Awaz’s ‘Janeman’ and Yatagan’s ‘Bhangra Rap’.

In 1999, Strings decided to make a comeback, but this time around, only with Faisal Kapadia and Bilal Maqsood. Their first song ‘Duur’ from the album of the same name was released in 2000, and the music video of the song was directed by Jamshed Mehmood aka Jami. The album Duur was released the same year, at a time when the Pakistani music industry was enjoying its peak with bands like EP, Aaroh, Noori, Call, Mekaal Hasan Band, and Mizraab, amongst many others. Duur also received a lot of attention in neighbouring India, and Strings gained a following there as well.

For much of the 2000s, Strings enjoyed a lot of popularity. As they made their way into the Bollywood scene, singing songs like ‘Zinda’ and ‘Akhri Alvida’, everything was going in the right direction for them. The band also bagged a number of awards such as The MTV Asia Awards, Lux Style Awards, The Musik Awards, and The Indus Music Awards, to name a few.

But one of the most remarkable chapters in the band’s life, to their own as well as everyone’s surprise, came when the band was asked to do a song for the Indian version of the soundtrack of the 2004 film, Spider-Man 2. The band chose ‘Najane Kyun’ from their fourth album, Dhaani, and it gained the duo more fame than ever before.

By 2008, the music industry had gradually become nonexistent due to the security situation in the country. Despite this, Strings took a risk and released their fifth album, ‘Koi Aanay Walay Hai’. The album was released by Fire Records in Pakistan and Sony BMG, internationally. The music video of the same name starred Bollywood actor John Abraham. Both the music video and the album received positive reviews. Strings was also one of the first bands to be featured on Coke Studio, performing renditions of their songs in the first two seasons and collaborating with other artists.

Strings took advantage of their popularity and went a step ahead raising public awareness in regards to the current social issues that Pakistan was facing. In 2010, they released ‘Ab Khud Kuch Karna Parega’, which focused on the issue of violence taking place in the country. The song was nominated for the Lux Style Awards the next year. In 2011, they released another single titled ‘Mein Tou Dekhonga’, which focused on children’s education in Pakistan. In 2011, the band became brand ambassadors for Levi’s Pakistan and released renditions of their songs ‘Mera Bichra Yaar’ and ‘Anjane’, with Zoe Viccaji and Bilal Khan, both of them who were newcomers at that time.

In 2013, the band performed two new songs on the short-lived music show, ‘Pepsi Smash’, produced by Farhad Humayun of Overload. The two songs were ‘Jeevan’ and ‘Sajni’ – the latter being the first song to be released from the band’s upcoming album, 30. The same year, Strings was chosen as judges for the music show, ‘Cornetto Music Icons’, alongside Meesha Shafi, Shahi Hasan, Ali Azmat, and Alamgir.

They then left Coke Studio after the tenth season and decided to concentrate on the band themselves. On 17th March, 2018, the band released Sajni, accompanied by a music video.

Sajni is a signature Strings track and is a great start to the band’s 30 year anniversary. Although the song was also performed previously on Pepsi Smash, this version feels different and is kind of nostalgic, perhaps because of the way it was promoted on the band’s social media platforms. Sajni gives a mellow sound, because the song is soft, in an absolutely perfect sense. The lyrics match completely with the sound of the audio. After all, the lyrics are penned by none other than the legendary, Anwar Maqsood.

Directed by Yasir Jaswal, the music video is ubiquitous, in the sense that it feels like it’s way ahead of its time. Simultaneously, the use of props like the dial up phone and the red car etc, transport one back to the 1980s – the band’s early days.

With Sajni, the band is off to a strong reboot, and one cannot anticipate what Strings have in store for their fans, as the other seven songs, unlike Sajni, are all brand new and never heard of before. The band’s much awaited album, 30, is to release at the end of this year as confirmed by the band itself on their live Facebook chat.