The case of increasing tuition fees 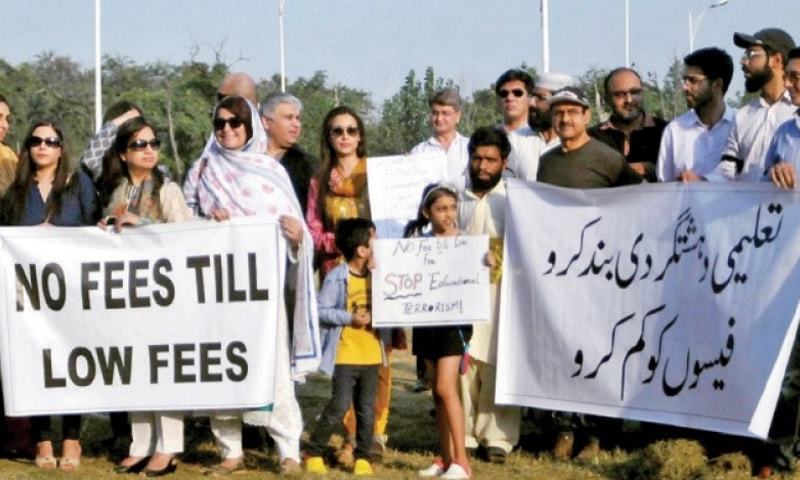 It is a common sight we see daily of young children carrying oversized school bagsloaded with books and their backs burdened with the accumulated load of knowledge. In turn the schools, where they go to seek education, are burdened with the responsibility of promoting literacy in the society, but it is the parents of the children who bear the cost. Thus, it is not a surprise that more than often, each points fingers at one another when the burden becomes too much to carry.

In response to some parents decrying ‘exorbitant’ fees charged by private schools, the case at Sindh High Court was somewhat settled recently when the court quashed a government rule which restricted increase in tuition fees by private schools to 5 percent, terming it as ‘constitutionally impermissible.’ The court did, however, direct the Sindh government to frame relevant rules within three months to regulate fee determination, if it wished.

The previous law and its rules had been challenged by private schools in the Sindh High Court since 2005. The schools had contended that fee regulation ought to be a matter left essentially to them, as ‘they are required to increase the school fees from time to time on account of various factors including capital outlays, increases in overheads, expenses and to earn a proper return on their investments as is only to be expected of any business.’

In the judgement of the case, it was noted that the school itself can be a business and ‘there is nothing wrong with running a school with the intent of making a profit.’ However, the judgement further said that although parents do not deny that the schools are entitled to increase the school fees, it is the frequency and magnitude of the increases that incenses them.

The issue is reminiscent of another bitter row in Punjab nearly two years back. In 2016, the Punjab Assembly passed the Education Authority Bill which allowed a maximum of 5 percent increase in school fee annually. The law also limited admission fee deposited to schools to a maximum of the monthly tuition fee, with violation of the law to result in fine up to Rs 2 million.

The schools did reopen after negotiations between the school associations and the government and early last year, the provincial government ordained that ‘if there is a reasonable justification for increasing existing fees at more than 5 percent, the school in-charge, at least three months before the commencement of the next academic year, would have to apply to the registering authority incorporating a justification.’

Amidst both the rows, the ones who suffered were the students. When the schools were shut in Lahore and other cities of Punjab, it was the right to education which was afflicted. Like many other areas in the country, the laws and regulations of the education sector still remain under debate despite the country having celebrated 70 years of independence. The counsels in favour of private schools had to give convincing arguments to prove a crucial point that ‘schools could not be treated on a one size fits all approach.’ Each school, catering to a particular sector of the society, with its own curriculum and its requirements, has a different set of expenditure.

But then schools are expected to deliver what they promise. When tuition fees for a class in primary school ranges between 15 thousand rupees a month to 20 or even more, in return quality education worth the amount should be delivered. The parents rightfully claim that at this standard of fee structure at primary and secondary schools, the ceiling gets further raised when it comes to higher education.

Although many mainstream schools regularly train their staff through workshops and other courses, the fact remains that most of them teaching a curriculum of Cambridge or any other foreign university, are themselves a product of the local schooling system. The use of grammar and pronunciation of many teachers at even high end schools is inaccurate. The entrance tests at these schools for all students are quite judgmental. To balance the equation, teachers should also be made to go through rigorous training.

In return of the hefty charges these schools make to the parents, the maintenance of the buildings, interior, furniture etc are impressive. But when some of them are accommodated in old housing structures with limited space for playgrounds, the purpose achieved is also somewhat limited.

When a parent pays a sizeable amount of tuition fees for one or more of their children, the least a parent would expect is that the child completes his educational requirement at the school. But if the parent has to pay for additional coaching classes after school, just because the child is unable to cope with the work pressure or simply cannot understand concepts, the financial burden indeed becomes heavy. Here, the schools should make arrangements to accommodate and strengthen weak pupils.

The issue of how much a school should be allowed to charge a student as tuition fees would probably become a non issue if all the requisites of education – mental, physical and emotional – are provided by his school. If a parent would see the intellect as well as personality of his child mature and would also see him independently handling studies, the pinch in his pocket may be justified.

It may be wrong of the government to put a ceiling on tuition fees charged by a school, but then it would also be wrong for a school to put a cap on the effort it makes towards its students.

The role of schools does not end when pointing out weaknesses in a child and suggesting remedies for it, a parent has the right to expect the institution to go an extra mile to help the child overcome his weakness. There can be a debate on whether there should be a cap on charges for education, but there can be no limit to striving to achieve the basic right.