Malakand is tax-free zone, deduction from salaries is unlawful

DIR: President All Pakistan Clerks Association (APCA) Upper Dir Nusrat Ghafoor has said Malakand Division is a tax-free zone due to which deduction of the income tax from salaries of the government employees of the Malakand was unlawful.

“This taxation should end immediately”, he said while talking to media in his office.

He said that it was unfair and unjust act that the government had given exemption to industrialists, traders, transporters, contractors and other sectors in the income tax in Malakand division. However, the government was making deduction of income tax from the monthly salaries from government employees in the division, he added.

“Deduction of income tax from salaries is a clear discrimination and extreme brutal act with these employees working in the Malakand division,” Nusrat Ghafoor said.

The government of Pakistan has signed an accord at the time of merging the states of Dir and Swat into it due to which the Malakand division was declared a tax- free zone.

He said that employees were badly suffering by the government’s double standard and discriminative attitude with them, adding that an uncertainty also creating among those employees.

The APCA president said that the law is equal for everyone and every citizen should also treat according to law. 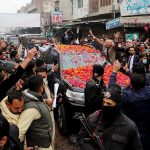