* De-facto finance minister says deficits will be controlled * Pakistan won’t go back to the IMF, may issue Panda bond 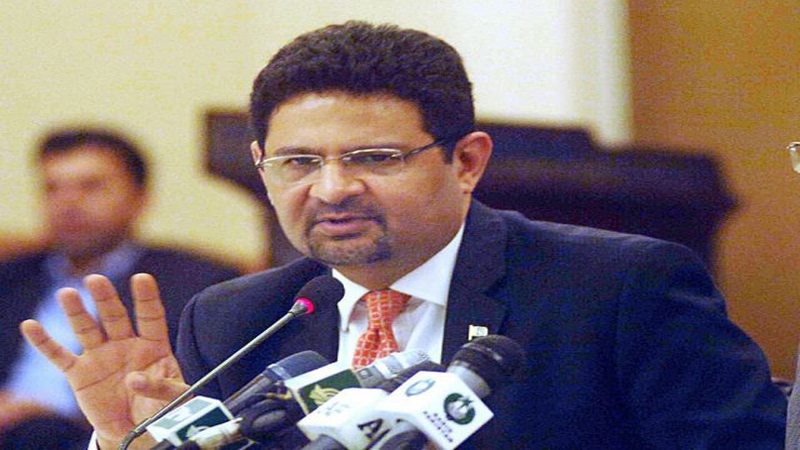 Pakistan’s de-facto finance minister refuted an International Monetary Fund assessment that the country’s economy was deteriorating and said plans to issue dollar bonds or Chinese-currency bonds haven’t been firmed up.

The IMF in a statement this week said the South Asian nation’s economy faces continual “erosion” and its widening external and fiscal imbalances mean that “risks to Pakistan’s medium-term capacity to repay the fund have increased” since completion of a three-year $6.6 billion bailout program that ended in Sept. 2016. Pakistan’s current-account deficit could reach 4.8 percent of gross domestic product in the year ending June, the IMF said.

“Given the growth of our economy, this growth will solve lot of problems,” Miftah Ismail, an adviser to Prime Minister Shahid Khaqan Abbasi, said in an interview in the capital Islamabad late on Wednesday. The fiscal deficit went up “last year we had lot of political upheaval — but we will bring down to less than 5 percent. We’ll make sure, our current account deficit is under control, not more than 3 percent next year.”

While Pakistan’s economy is growing at its fastest rate in a decade — at around 5 percent — on the back of China’s Belt and Road initiative, it has also come under strain in the past year. The nation’s current account and trade deficits have widened as exports lag regional peers, while foreign-exchange reserves have dropped 27 percent to $12.3 billion in the past year. That has increased speculation that the government will have to go to the IMF for what would be its 13th bailout since 1988.

Pakistan’s government is looking to raise funds to ease that pressure as political parties start campaigning for elections in July. The ruling party, whose leaders face multiple legal and corruption charges, will be loath to go back to the IMF so soon after the last program ended as it would indicate economic mismanagement.

“I don’t see us going back to the IMF — we are considering issuing a Panda bond which is sold in China,” said Ismail, who took over the ministry portfolio in December after Finance Minister Ishaq Dar, who faces arrest in Pakistan on graft charges, sought medical treatment in London. “If the market is favorable only then I’ll go to the market. If not, I’m not in desperate need for money.”

Pakistan last issued dollar debt in November, raising $2.5 billion. The Muslim-majority nation of more than 200 million people is looking to tap the markets before the national vote and hasn’t decided if it will issue conventional bonds or Islamic-compliant sukuk, Minister of State for Finance Rana Afzal Khan told Bloomberg last month.

The World Bank estimated in October that $17 billion of external financing is needed in the current financial year for Pakistan to bridge its debt payments and current-account deficit. Local media reports this week said Pakistan aims to sell at least $1 billion in dollar bonds and get up to $1.5 billion in short-term financing from Chinese banks, citing unnamed finance ministry officials. Ismail declined to comment on the amounts they would look to raise. 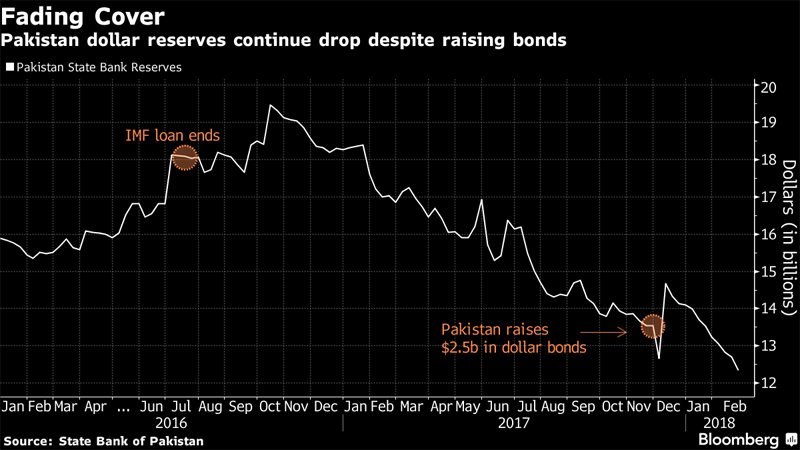 Investors have been cautious on Pakistan after the Supreme Court in July barred former Prime Minister Nawaz Sharif from office following a probe into his family finances. Pakistan’s benchmark stock index was the worst performer globally last year, though it has seen a measured rebound since.

With the rupee under pressure, Pakistan’s authorities allowed the managed float to drop 6 percent against the dollar in December. Ismail declined to comment when asked if the government will devalue the currency further.

Pakistan also faces being placed back onto an international terrorism-financing watch list from June, a U.S.-backed move that may hinder its access to markets. In an attempt to avoid inclusion to the Financial Action Task Force monitoring list, Pakistan’s government seized offices, buildings, seminaries and ambulances belonging to the charities of Hafiz Saeed, the suspected planner of the 2008 Mumbai attacks. The U.S. and India say they are fronts for militant group Lashkar-e-Taiba.

“All the things we needed to do to avoid FATF listing, we have already done,” said Ismail, adding Pakistan will tighten its anti-money laundering and counter-terrorism laws. “I don’t want anybody to think that we are soft on money laundering or terrorism financing. I want this recognition from the world that Pakistan is very tough on them.”