My fan moment with Shobhaa De at LLF 2018 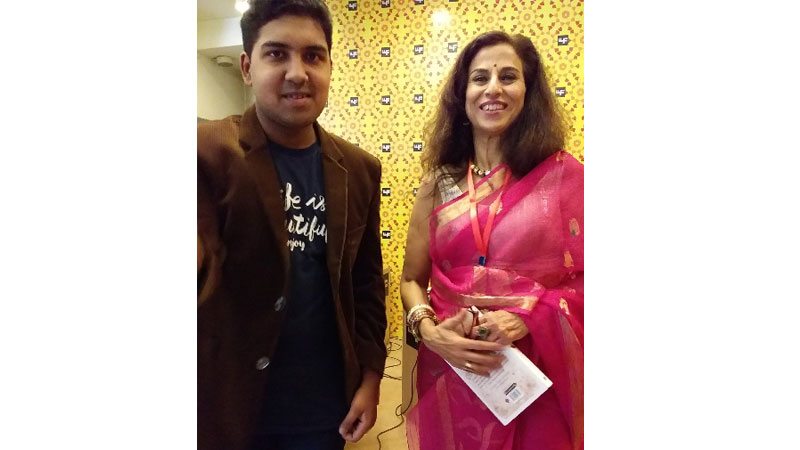 I am someone for whom the LLF (Lahore Literary Festival) has always been an enthralling experience; it takes place around the end of February every year when the spring season is already in full swing. So these last days of February were bringing to me (since I have started attending LLF) the “double bonanza” of not just relishing the beauty of spring but also a wide variety of panel discussions and performances by an array of aficionados, not just from the field of literature but also other art forms including music and cinema from all over the world, from London to Lahore.

I triumphantly managed to meet the deadline for all of my class assignments well before time, because if there was one thing which acted as a catalyst behind such a super-human move, it was realising the fact that my favorite Indian author, Shobhaa De, was in town. She was all set to have her book launch on the second day of LLF’s Sixth Edition. Such news was adequate enough for me to carve out some hours from my busy schedule. I was able to finish my work on Friday and Saturday and spare Sunday for LLF. I saved the LLF schedule from the online link in my cell phone and went through it twice or thrice out of sheer excitement to confirm two different sessions by Shobhaa De on the second day of Lahore’s much anticipated annual literary extravaganza.

Shobhaa’s first session was scheduled to start at 12:30 PM, so I woke up a little earlier than my usual routine to reach the venue before time, even though out of anxiousness I managed to catch only four hours of sleep that night. I was personally one of Shobhaa’s most ardent admirers, and I had prepared for her a list of questions ever since the time I started rejoicing in her salacious novels and wit soaked scathing columns, which have always pushed the envelope for South Asian writers in terms of sexual frankness in their narrations and entailed in themselves her trenchant observations, not just on the glitzy world of India’s very own Mumbai-based Tinsel town but also on political and socio-economic events.

Shobhaa’s first session in Hall #4 at Alhamra Arts Council was a book launch of a Pakistani writer named Nadiya A.R, moderated by her. Nadiya’s book named ‘Invisible Ties’ seemed like a wonderful read to me as an avid reader of South Asian Literature. Eventually, Shobhaa’s role as moderator in another author’s book launch came to a finish and shortly afterwards, the Q&A session kicked off. I had been impatiently waiting for this since days. Naturally, I was the first one to ask a question when the book launch ended, and my question was for Shobhaa. After greeting everyone in the hall with a neutral “good afternoon” and divulging a bit about myself (I am a blogger and an Undergraduate student) , I went on to address Shobhaa ma’am in her native Marathi language, first with a “Namaskar” (meaning “Hi”) and then with a phrase “Tumhi Ksha Ahath” (which in English literally translates to “How are you?”) Shobhaa De, out of amazement to see a Pakistani Lahorite ladka uttering a Marathi phrase with a shudh Marathi accent that I picked through several foreign movies and TV shows, inquired me about my reasons of familiarity with the language. “How do you know Marathi?” she asked, and my reply to her was, “I have learned it through fervently following Marathi cinema and music.” She chuckled at my retort. I then proceeded to my question: “Will it ever be possible in the future for Pakistani artists, be it actors or writers, to gain as ginormous popularity as Indian artists and Bollywood superstars have received in Pakistan, despite all sorts of political tensions?”

Shobhaa responded to my question by talking about Fawad Khan’s stardom in India, but for me the whole Fawad Khan craze in India was now a matter of the past, particularly in the context of the recent Indian ban imposed on Pakistani artists. Therefore, my question basically remained unanswered.

After a few more questions from the audience, which were primarily for the lady whose book launch was taking place in that space, the session came to an end. In an instant, I left my seat and moved at a faster pace towards the place in the hall from where Shobhaa was now leaving. There, I was bestowed with the golden opportunity of not only taking several selfies and pictures with my favourite Indian author but also the opportunity to get her autograph and good wishes on a piece of paper. Fortunately, I also had the opportunity to converse with her freely for several minutes, both inside the hall and outside the hall, after the session had ended. Our freewheeling conversation comprised of Shobhaa’s questions about my interest in Marathi culture and my retorts to her about its elements that fascinated me more, such as Lavni dance as well as classic Marathi songs like ‘Apsara Aali’. Outside the hall, Shobhaa recorded a video message of good wishes for me in Marathi language, and during one of her media talks with PTV News, she called out my name, as I was standing not very far from her, and she asked me to join her in the coverage, being the first Pakistani who took her by surprise followed by his greeting in her native Marathi language. 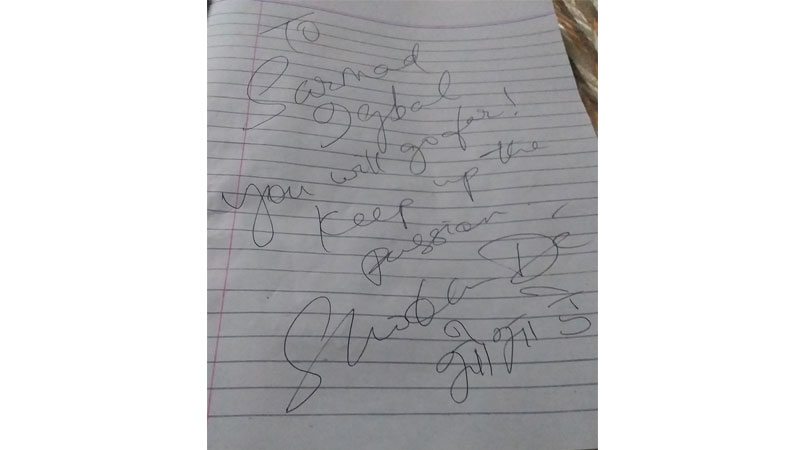 At 5 pm sharp, Shobhaa’s second session began, which was moderated by Pakistani author, Sabyn Javeri. This one session was as exhilarating as Shobhaa herself; it comprised of instances like the one where Shobhaa bluntly, with a bindaas attitude said, “I don’t care about what people say about me. I think people should care about what I say about them”. The session was utterly exuberant, and at around 5:50 pm to be precise, the session ended and out came about the Q&A session. Despite the fact that Hall #2 was a large auditorium packed with hundreds of her admirers just like me, I managed to ask her another question, keeping alive the tradition I had established in her last session (to greet her in her native Marathi language before following it up with a question). This time, I uttered the beautiful Marathi phrase, “Shubh Sandhya” (meaning “Good Evening”), before asking my question. I went on to ask her: “Ma’am! When you were doing your specialisation in Psychology at St. Xavier College, Mumbai, did you have any idea at the time that one day you would become one of the most accomplished South Asian writers?”

Shobhaa answered my question by telling us how she picked Psychology at college for the sole reasons of it being an “easy subject” at that time, as she didn’t have any idea of pursuing writing as her vocation back then. There were a few other questions from the audience for Shobhaa (including the one about Bollywood actress, Kangana Ranaut, to which Shobhaa retorted to by addressing her as her “Gladiator”). Soon after, Shobhaa departed from the hall as well as I, from the venue, feeling accomplished and a bit overwhelmed too.

I must say that even at 70, Shobhaa De has no plans to retire from making her voice heard. Kudos to her for this.

The writer is a Pakistani blogger and student who has a penchant for reading, writing, learning languages and studying cultures. He tweets at @sarmadiqbal7