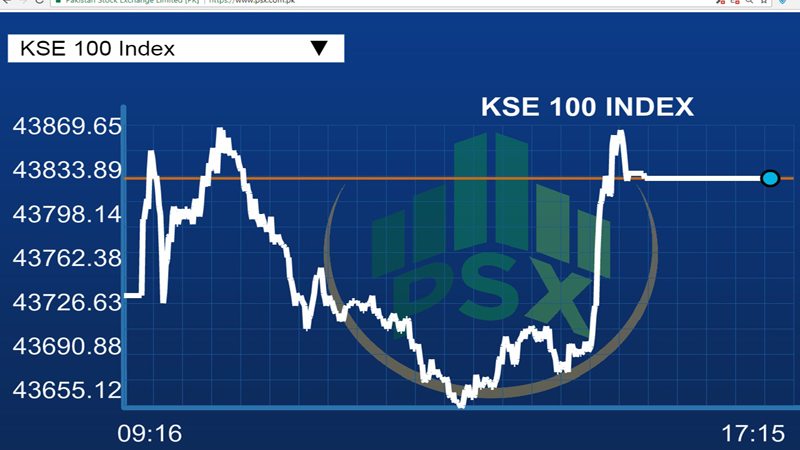 KARACHI: Pakistan equities closed Monday slightly positive after a range-bound trading as a lackluster session was witnessed at the local bourse, with the KSE-100 Index crawling up by 0.2 percent or 88 points, to close at 43,829 points level.

“Contrary to our expectations of a robust session, market traded dull and didn’t cheer the timely and peaceful culmination of senate elections over the weekend; turnover in wider market clocked in just under $55 million, down 29 percent versus 20 day average”, said Ali Raza, an analyst at Elixir Securities.

Volumes remained subdued, as 137 million shares changed hands during the day. Most of the dull activity can be attributed to political uncertainty and lack of positive triggers. On the political front, Election Commission of Pakistan (ECP) announces official results of 2018 Senate elections, where PML-N bagged 15 seats in the Senate election, emerging as majority. As market struggled to find a clear direction all day, few select stocks namely Habib Bank HBL with 1.3 percent gains and Lucky Cement with 1.3 percent gains came to the rescue in late trading and added 65 points to KSE-100 Index.

Raza expects market to remain trigger-hungry in the coming days as he sees cements remaining in limelight as investors looking to get clues on retail prices, where any signs of further stability in prices should bode well for the sector and market sentiments.

Research’s analyst Maaz Mulla expects the market will depict a similar trend and recommends investors to see any upside in the market as an opportunity to sell.