The decision by United States President Donald Trump to recognise Jerusalem as the capital of Israel and proposed a shift of the US Embassy from Tel Aviv to Jerusalem would upend decades of US recognised policy on the Middle East. During the election campaign, Trump promised multiple times to move the embassy. However, he appeared to back away from the idea during his first months in office under pressure from the Palestinians and other Arab leaders.

Standing in the White House Diplomatic Reception room with Vice President Mike Pence behind him, President Trump said that ‘today, we finally acknowledge the obvious: that Jerusalem is Israel’s capital’. Thirty years ago, the first ‘intifada’ began in a Gaza refugee camp, when an Israeli Army truck collided with a civilian car killing four Palestinians. The uprising spread like wildfire and continuously burned for six years. The second intifada followed the failure of talks of Camp David 2 in 2000.This showdown can result into another ‘intifada’ converting the Middle East region into an inferno. The environment is already volatile for prevailing despotic regimes of the region and will further intensify the numerous existing conflicts.

It is important to note that Jerusalem is one of the oldest cities in the world, with tremendous historical significance dating back to the copper age — the four millennia. Until the 7th Centenary, Jerusalem repeatedly changed hands between the Babylonians led by Nebuchadnezzar (626-539 BC) after the fall of Assyrians; Roman Empire/Byzantine Empire-Eastern Roman Empire (330-1453) with the capital at Constantinople, and the Sassanid-neo Persian Empire. From the 7 CE, the city came under the direct Roman rule and Emperor Hadrian, who attempted to de-Judaize the country, enforced a ban on Jews entering Jerusalem. Herod the Great had devoted himself to developing the city, and his descendants remained hegemonic kings with full control of Judea.

If the Palestinian and European leaders want to keep open the possibility of a two-state solution, they should reaffirm the importance of deciding Jerusalem’s future in negotiations of Middle East peace process with the Palestinian capital in East Jerusalem

In 638 AD, the Islamic Caliphate extended its dominium to Jerusalem, which was considered among the Arab world as the third holiest city after Mecca and Medina. With the Arab conquest, Jews were allowed back to Jerusalem, and the city remained under Arab control. From the preceding, it is apparent that from the time immemorial, Jerusalem remained under disputed status between various protagonists: Jews, Romans and Arabs. Jews have strived in every way to secure Ertz-Israel — a homeland. In the same way, the Arabs (Muslims) have the same claim on the ‘Promised Land’. This multiplicity of contention is the most delicate contradiction that has not yet received amicable agreement regarding Jerusalem — the very epicentre constituting the Middle East conflict.

On November 2, 1917, the Balfour Declaration, which was reaffirmed by the mandate of League of Nations, granted permission to the Jews for the establishment of a national home for Jewish people in Palestine. Palestine was then, with a minority Jewish population of around 3-5 percent of the total, under Ottoman region. The catastrophe that befell the Jewish people, the holocaust in Europe during World War-II, demonstrated the utmost urgency for the Jews who were widely scattered through the numerous countries of the World to secure a homeland. 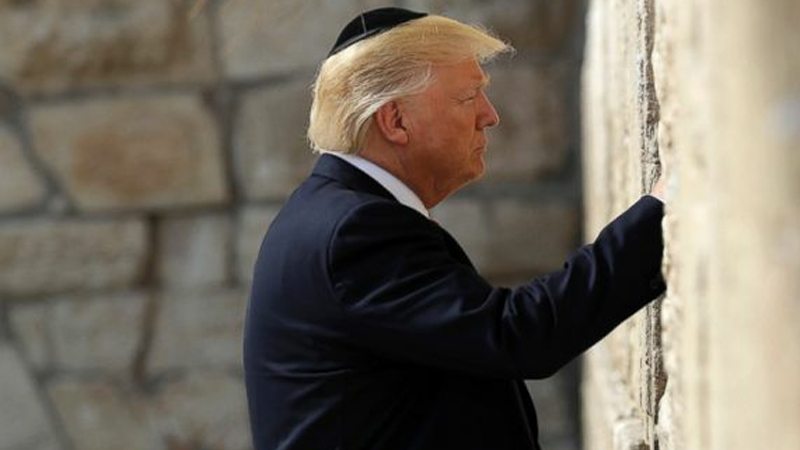 On November 29, 1947, the United Nations General Assembly passed a resolution calling for the establishment of a Jewish State in Eretz-Israel, resulting in the 1948 ‘official birth’ of the nation of Israel. This led to the beginning of the perpetual conflict in the Middle East between the Arab world and Israel. The USA is the chief architect of Middle East peace process. Moving the embassy would be seen as the United States endorsing Israel’s claim to the city and rejecting the Palestinian one. The city is home to holy sites sacred to Muslims, Christians and Jews, such as the Dome of the Rock, the Western Wall, the Temple Mount and the Church of the Holy Sepulchre.

The Palestinian authority, first under Yasser Arafat and currently under Mahmoud Abbas, has repeatedly attempted to negotiate with Israel to reach amicable agreement — particularly the recognition of Palestinian state and its apparent capital in East Jerusalem. The failure of the Camp David-II peace talks convened by Bill Clinton in 2000 was the spark that reignited the second Palestinian intifada and derailed the Middle East peace process. That resulted in devastating consequences regarding human life, suffering and the death of any hopes for apolitical movement. Even if Trump offers assurances about respecting the holy places, that is unlikely to assuage anger across the Muslim world.

Washington may assume that Saudi Arabia, Egypt, and the allies are more concerned these days with the challenges from Iran and from within the Arab world than that of from the fate of the Palestinians. But Jerusalem is the perfect issue for the Islamic world to mobilise anger, resentment and shock against the United States and the western world and those who endorse these policies. Even before this episode, the chances of progress towards peace in Israel already ranged from the very slight to the non-existent.

Since Mr Trump’s decision, there have been substantial protests across the Middle East. The violent anger and resentment were shown when Vice President Pence visited Israel during last week of January. No Arab Muslim and Christian leaders have agreed to meet with him during his visit, and he was not scheduled to visit Christian holy sites. The decision was a rebuke to the United Nations as well.

The passports of Americans born in Jerusalem will continue to say born in Jerusalem, not Israel. The American government maps will not identify Jerusalem as being inside Israel. This is nothing but confusing. Wiser heads in the US administration are trying to mollify Palestinians and other Arabs antagonised by Trump’s posturing. More than 50 Muslim leaders, meeting in Istanbul, criticised the decision and urged the world to recognise East Jerusalem as the capital of an independent Palestinian state. In Brussels, most leaders of the European Union have rejected the idea of following Trump’s lead.

Trump continuously insists he still intends to pursue new peace negotiations in the Middle East but has not made any such effort. This is how this White House operates under Donald Trump. The officials repeated their expectation that Jerusalem’s Western Wall, which lies outside Israel’s pre-1967 borders and abuts some of Muslims’ most sacred sites, will eventually be declared part of Israel.

However, they were careful to say that the final borders of Israel and any Palestinian state must be settled in negotiations. But it seemed another case of America taking Israel’s side on an explosive issue. Trump has boasted of making the ‘deal of the century’ but will prove disastrous for the prevailing regimes in the Middle East. This recognition is lopsided, openly favours Israel and ignores long-standing and widely-supported Palestinian demands for an independent state with East Jerusalem as its capital. The decision appears both biased and destructive.

The first task for the Islamic leadership is to foster unity, shun differences and discourage violence that could engulf the region at significant cost to all sides in this unsettling stage with dwindling options. If the Palestinian and European leaders want to keep open the possibility of a two-state solution, they should reaffirm the importance of deciding Jerusalem’s future in negotiations of Middle East peace process with the Palestinian capital in East Jerusalem. For his part, Trump can lessen the damage by postponing his decision to move the US embassy to Jerusalem, indicating that the United States wants to recognise East Jerusalem as Palestine’s capital as part of a peace agreement.

The writer has served in Pakistan Army