Mazhar Shafiq, a UET Engineer of Pakistani origins, made the entire Pakistani-Canadian community proud by securing a seat on the table of Provincial Parliament of Ontario contenders. But now, he must consider running another campaign.

He is one of the few people who made it to the mainstream political spectrum from the grassroots with his immense hard work, community activism and representing community in queen park Provincial Assembly of Ontario as Special Advisor to Premier Kathleen Wynne the leader of the house.

In Canada, there is a whole process to undergo before being nominated and finally run for elections.  This is a normal practice in the first world democracies.

To get nominated as a candidate, you must complete the Candidate Nomination Paper where you need to provide the signatures and addresses of at least 25 eligible electors in the electoral district that you are running in.

Once the nomination papers have been approved by the Chief Electoral Officer or the Returning Officer, you will be nominated and issues a Certificate of Nomination.

The rest depends on the voters who will cast their votes on the Election Day. Mazhar Shafiq won this nomination race quite easily. A local newspaper ran a headline saying, ‘Mazhar Shafiq wins big, wins more hearts’.

Months and weeks of hard work paid off when Shafiq secured the Liberal Party Provincial Ticket as MPP to contest in coming 42nd Ontario general election that is scheduled to be held on or before June 7, 2018 under amendments passed by the Legislative Assembly of Ontario in 2004.

Half the battle won as one contest is over but next is just ahead where Mazhar Shafiq will be challenging the other strong rival candidates of Progressive Conservative Party and NDP in main elections. It is still a big task for him and his team who already worked hard for his nomination success.

When running for a public office in Canada, you need support from all the multicultural communities to achieve success; Mazhaf Shafiq is one of those lucky people who have equal support from all corners. 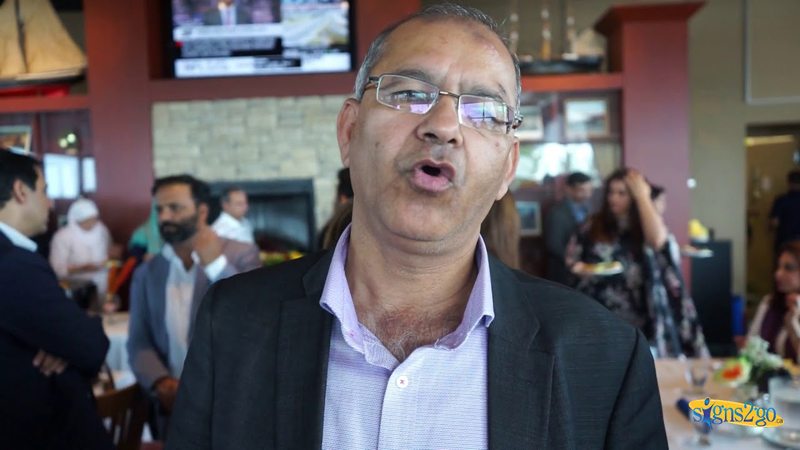 “This would not have been possible without the hard work of all these individuals”, Shafiq says. His Pakistani fort was held by Khalid Usman, Gujrati community was handled by Majid Bala, Aziz Amiri was Aghan community liaison, while Imam Abdul Rashid was responsible for Somali residents of his riding, Normal Carpoo worked with Filipino Canadians, Yannis with Greek and Mohamed Chakron Arab Canadians.

Political pundits still see him as a favourite candidate for the race in coming elections who is a very popular figure in the Scarborough Centre riding of Toronto.

Like Mazhar, there is another nomination race currently going on in another riding of the city and coincidently both candidates are of Pakistani origin, one is Hifza Musa and other Imran Mian. As time goes by, this race is getting tougher and seems like going down the wire to a photo finish.

Community has learnt lot from these two campaigns and gone through some ups and downs. Though candidates are running it with their heads high and with dignity, some of the supporters from each corner are showing colours of traditional Pakistani elections. And when speaking of Pakistan style politics and electoral practice, one must expect mudslinging and usage of gender and religion card.

Mazhar Shafiq didn’t have to go through this but unfortunately, Mississauga Erin Mills riding has taken some ugly turns on social media with emerging fake accounts, character assassination and using Ahmadi card to manoeuvre public support.

I would like to take this opportunity and ask my readers in Canada to not pay attention to any such allegations, I have personally met both candidates, known them for many years and confirm that these are baseless rumours. Please vote for the one you think is capable, qualified, and deserving on merit.

The writer is a social and civil right activist and very vocal on Human Right violations across the globe. He works as Host/Producer (Current Affairs) at a leading news channel of North America. He can be reached at anisfarooqui@gmail.com and tweets @anis_farooqui