In Pakistan, love was not in the air on Valentine’s 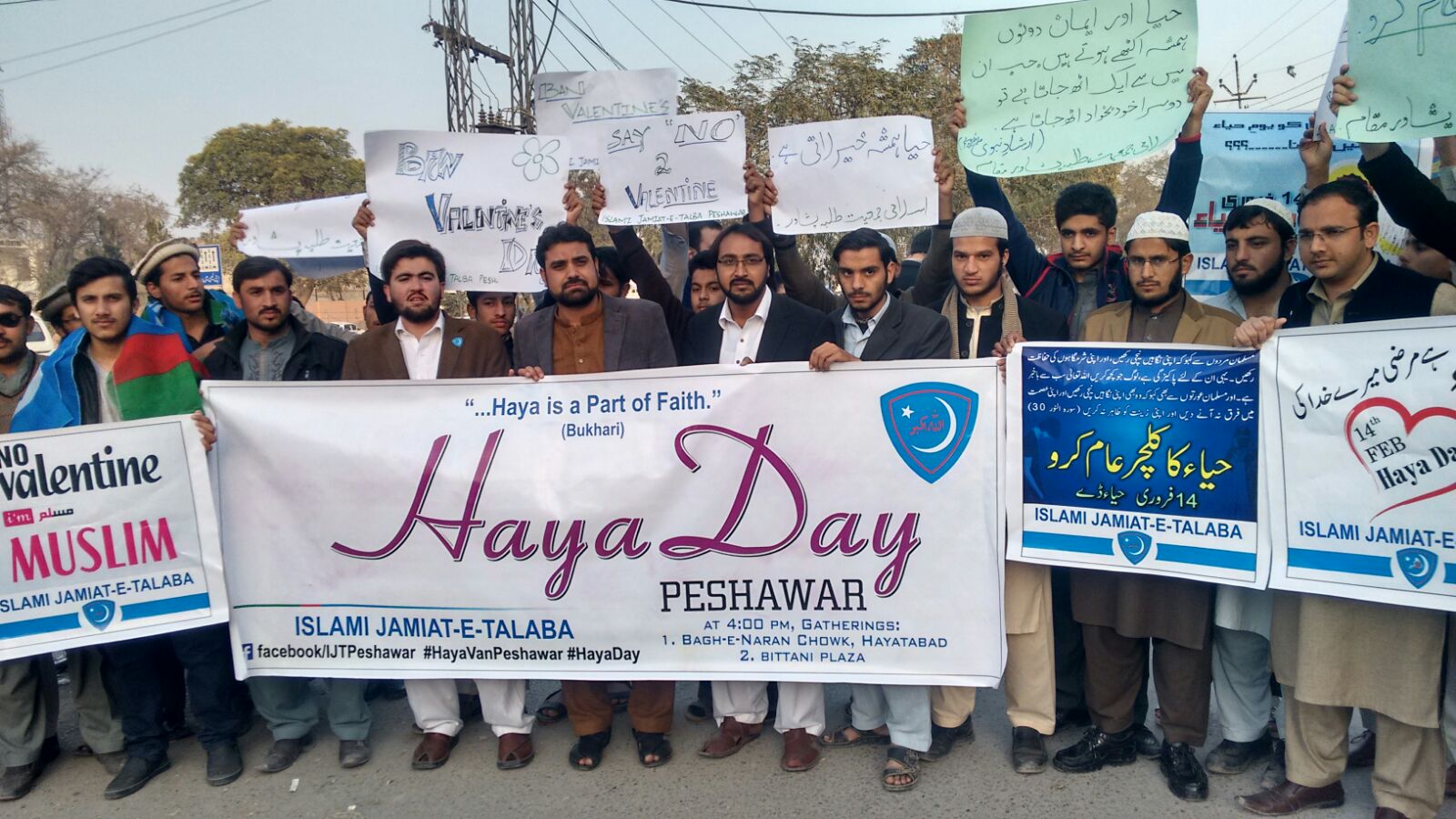 Just like anywhere else in the world, on Valentine’s Day, a peek at anyone’s Facebook page in Pakistan would have revealed messages of love: hearts fluttering around like butterflies amid floral backgrounds. Happy couples – engaged, married or just a bunch of two in love – shared pictures. Some extended their mushy feelings to all their loved ones, others opened their hearts and sent Valentine’s Day wishes to all they knew. The streets, however, bore lesser expressions of love.

A day, on which few years ago towns would literally be doused in red, this year had a rather bland look in Pakistan. Religious zealots hit harder this time by sending stronger messages that Valentine’s Day does not belong to our culture and promotes immorality, obscenity and un-Islamic values. In places which would otherwise be regarded as good ‘dating spots’, banners attempting to chastise readers into following moral behaviour could be seen.

Hundreds of pro-Islamist university students rallied in Lahore to show their opposition to Valentine’s Day. They arranged a ‘Walk of Shame’ at the university campus as part of their crusade. In the Karachi University, another conservative Muslim youth group vowed to ensure there would be no celebrating the day of love on their campus. Their zeal was considerable. A spokesman said they were creating a new tradition for February 14: Modesty Day. They had lectures planned for students. And they went beyond conferences: attempting to inform university authorities on finding any ‘suspicious’ activity!

The hard core feelings of the zealots bore a stamp of approval from the state. PEMRA sent a reminder to broadcasters not to promote Valentine’s Day. It followed a ruling by the Islamabad High Court last year that banned valentine celebrations in public places.  That was in response to a petition by a citizen who argued the day went against Islam. The year earlier, Pakistan’s President Mamnoon Hussain had also urged citizens to avoid celebrating the day.

Interestingly, the day of love got a thumbs up in a country where any celebration of the sort would be unimaginable, owing to much stricter regulations and conservative societal set ups. A prominent Saudi cleric endorsed Valentine’s Day, calling it a ‘positive social event’ that was not linked to religion.

Florists openly sold red roses and Valentine’s Day memorabilia in cities such as Jeddah without any trouble from the religious police, previously notorious for disrupting celebrations. Back here in Pakistan, known to thrive on such days, the floral sales did continue. But selling flowers was not the issue.

In Pakistan, public display of emotion between members of the opposite gender is a crime punishable by law. Sex is a taboo subject in public forums and acceptability of sexual relations except between married couples is out of the question. Despite these taboos already in place, religious extremists fear that increased Western influences and popularity of their customs might disrupt the societal set up of the country. What they overlook is the fact, that all means of communication, business, modern warfare, education – the list of sectors can go on, are all based on models followed in the Western world.

Yet the war of cultures is not new in the country. During the Zia regime, when probably the largest Islamisation move took place in Pakistan, prostitution was declared illegal and brothels were forced to close. But instead of the crackdown curbing immoral societal practices, it has led to a mushroom growth of prostitution rings throughout the city and the country. Lack of sex education, a common concept in the West, led to more curiosity about the opposite gender. With strong restrictions and no outlets available, the sexual frustration of young and even aged Pakistanis is quite visible. Shady and secluded corners of public places like parks, cinemas and even restaurants are commonly used as ‘dating spots’.

Outlawing an international celebration of love, which also allows offsprings to show they care to their parents or siblings, is not the solution. To promote moral values, one has to practice it, beginning from home. Giving a younger generation the liberty to enjoy international trends in fashion, entertainment and communication, yet attempting to restrict their actions as hardline Islamists makes little sense.

Cultural taboos in our country are plenty. Whenever Valentine’s Day was celebrated here in the past, no outrageously immoral activity has ever been reported. Why would it happen now? Increased crackdowns on public places by moral policing only leads to search for discreet places, shady deals, increased frustrations. Excessive restrictions only lead to stronger urges to break them. Pakistan, it’s time to loosen up a bit!