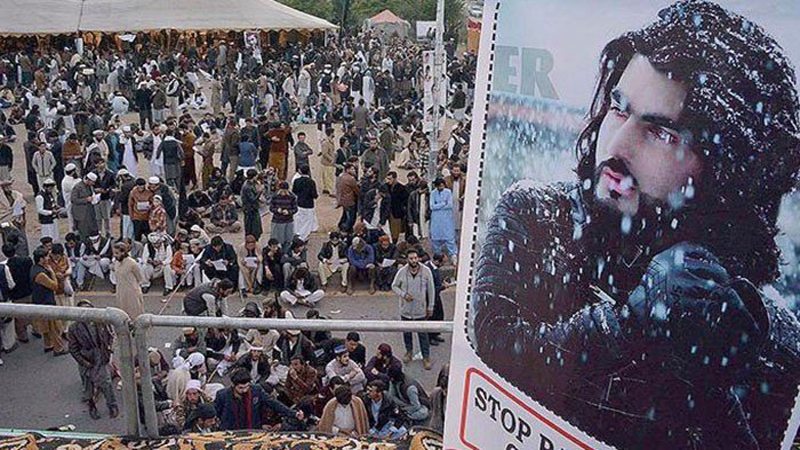 ISLAMABAD: In the backdrop of meetings with military high-ups, the 10-day long sit-in by Pakhtun Qaumi Jirga eventually ended on Saturday after Amir Muqam, advisor to prime minister on political affairs, appeared before the protesters with a written agreement to materialise all their demands.

“The way you held the peaceful protest is really commendable and others should learn a lesson to record their protests this way. I’ll stand by you in trying times and you can come to discuss with me all of your legitimate issues anytime,” Muqam told the protesters while reading out the written agreement.

He said though he is a government representative but simultaneously he is the representative of Pakhtuns also. “Today you proved that you’re peaceful people,” he remarked.

He reiterated that Pakhtun nation has rendered unprecedented sacrifices for the sake of the country. He said that the prime minister has directed the Sindh government and the concerned quarters to ensure arrest of the absconder Rao Anwar.

“As per your requirements, the prime minister has given assurance in written for the resolution of your genuine demands,” he added.

The five points agreement inked by the government: 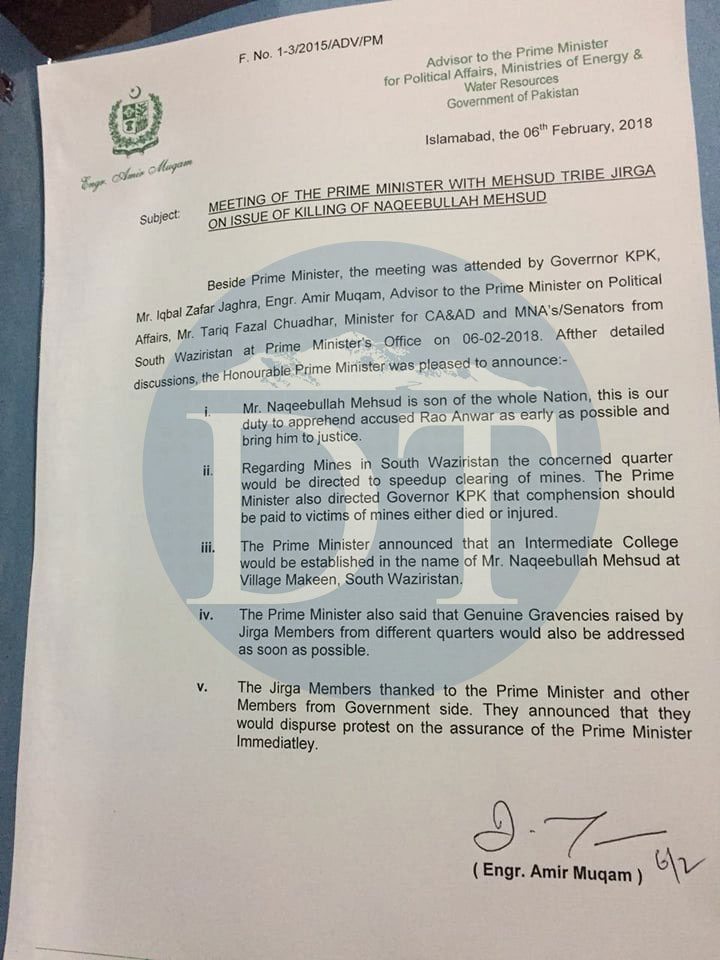 Manzoor Pashteen, who heads the Pakhtun long march, in his emotional speech said that these are positive developments, which would remove deprivations among people.

“This sit-in is going to be postponed after written assurances by the government. However, we will bounce back if our demands aren’t met within one month,” Pashteen added.

He said the protesters could be given a call to gather anytime in case of any untoward incident in FATA.

“The nation and the entire world has seen that we have neither closed any road nor attacked any institution nor abused anyone. Even a single flower pot was not broken during the 10 days long protest,” he remarked.

Earlier on February 1, thousands of tribal people gathered in the federal capital, vowing to continue their sit-in till the arrest of former SSP Rao Anwar who is alleged of killing a Waziristan man in Karachi in a staged police encounter on January 13.

The demonstrators were joined by thousands of people from D. I. Khan, Tank, Swabi, Mardan, Charsaddah, Dera Ghazi Khan, Peshawar, Bannu, North Waziristan and some districts of Balochistan who reached Islamabad after five days of travelling from their hometowns.

The charged demonstrators were chanting full-throated slogans: “Down with terrorists, hang Rao Anwar, we demand justice and stop extrajudicial killings of Pashtuns.”

Pashteen said that he is optimistic their demands would be fulfilled because they had held meetings with senior level officials and got a written agreement.