The problem we all live with

‘The problem we all live with’ is a 1964 painting by Norman Rockwell. It depicts Ruby Bridges, a six-year-old African-American girl on her way to an all-white elementary school. Escorting her are deputy US Marshals due to threats against her 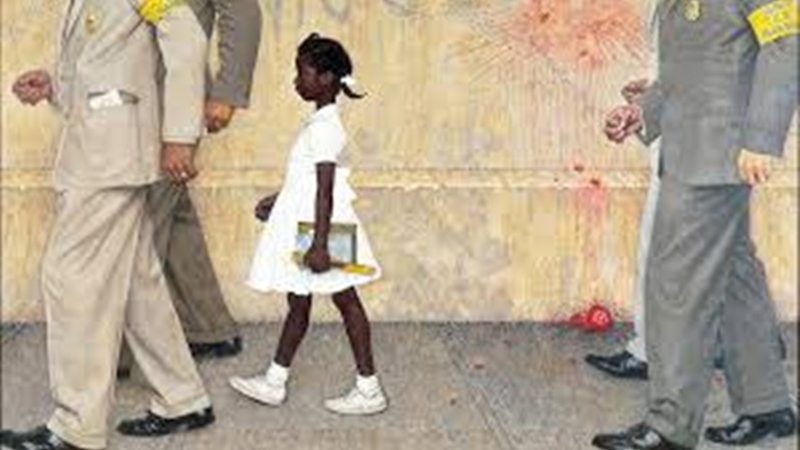 The quality resources that we get to enjoy mostly depend on which socio-economic class we belong to. We might think that this problem is pertinent to developing countries only. Well, think again!

An example is the education system in the US and how the black community, in the 21st century, is still being discriminated against. Their struggle has been a long one. Under discussion in one show of a public radio programme called ‘This American Life’ was how the US education system has evolved over the years with respect to educating the country’s black children. During the programme, a researcher talked about how achievement scores of black students were halved over a period of 17 years, between 1971-88, under a school integration programme; which is when black and white students got to study together, where black children often had to travel to other mostly-white districts. The researcher’s reply to how tremendous progress was made in such a less time was disappointing, to say the least:”Well, the black people first arrived on this continent as slaves in 1619. So it was 352 years to create the problem. So yeah, another 17 to cut that school achievement gap in half? Pretty fast.”

The solution seems quite simple by the looks of it: just put black and white children together in a classroom and see what happens. However, the school integration in some districts of the US was not as easy as it seems and came with a lot of backlash, not from the government, but white parents themselves as they labelled every black child as violent. This is an example of white privilege which still prevails in the 21st century. This is when you start to question accountability. Holding governments accountable is fair and square; you simply do not vote for them in the next election. How do you hold yourself accountable is the critical question today.

Allowing everyone a right to equitable and inclusive education is not only a fundamental human right, but the need to do so is because of its value in terms of improving the well-being of a nation. Pakistan has recognised such a right in its Constitution, but there is still a long way to go in terms of implementation. Richard Curran in one of his Ted talks emphasises how disparate perspectives are often not allowed by a group of educated elite to come up with solutions to particular problems. This then leads to a tunnel vision when it comes to solving complex issues where everyone loses in the end. It’s not just about thinking on the lines of fairness and equality in the education system alone, but how allowing everyone of us the right to quality education will produce more enlightened graduates, which in turn will benefit all of us. The sad reality we came across in the case of Mashal Khan shows how intolerant we have become, therefore placing a question mark on what kind of education we are imparting to our students and how we tend to stick to certain views that are an epitome of a regressive society.

Secondly, before solving a problem, there needs to be a realisation that there is one, which depends on what kind of issues constitute our national discourse. The faces of education in Pakistan are usually Malala Yousafzai and the students of APS Peshawar. I strongly support the courage and efforts of both of them but do they truly depict the face of education in Pakistan? When you see a headline ‘education in Pakistan’, do you associate it with an unnamed child labourer, a child with a disability, or a child bride? The two examples mentioned above simply tell us that we as a nation never want to take the blame. Sure, terrorists are also culprits in this, but the much more significant part of the responsibility solely lies with us Pakistanis alone. The reason why the unnamed children are not getting an education is that we don’t give them enough opportunities to do so. And even if they are getting their share of the pie, its taste tends to be bland, and we don’t dare to share ours with them. How, then, will the quality of the resources be ensured if the affluent are least interested in improving facilities that their own children don’t utilise?

Giving everyone a right to equitable and inclusive education is not only a fundamental human right, but the need to do so is because of its value in terms of improving the well-being of a nation

For certain policies to work, they need to be far-fetched in their approach, and we shouldn’t hope for good things to happen in the blink of an eye. Secondly, the disregard for evidence-based policy-making needs to stop. There is one thing to have a dearth of data; there is another to spend millions of rupees on gathering data only to discard it afterwards. Rejecting evidence just because it doesn’t align with one’s mindset is not done by the government alone but parents as well who push these governments to act in a certain way. As the researcher gave her closing remarks at the end of the show about when integration was at its peak, and positive results were achieved by black students in these integrated schools, the result was opposite of what you would expect — “The idea is, they try anything they can to keep Normandy students inside the district. This is how far they will go to avoid that one thing, that one thing that already seems to be working — integration.”