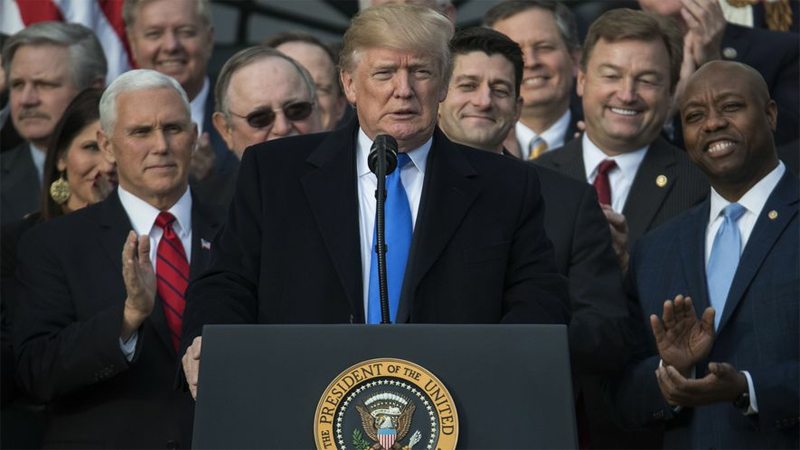 In blackjack it’s smart to double down (double your original bet halfway through playing your hand) when you have a likely winning hand and it appears the dealer has a potential losing hand. A good double down is smart betting and can maximize your winnings when executed at times when the odds are in your favor and your potential for loss is minimized.

In this spirit, Republicans and President Trump should double down on their wildly successful tax cut by moving to make the handful of rate reductions and personal exemptions permanent, right now.

This move would fulfill several important fiscal and political goals at the same time.

First, it would force Democrats to repeat their opposition to the tax cuts even after millions of Americans have received thousands of dollars in bonuses, stock packages and higher wages that have been announced in the past month since the tax cuts became law. It’s one thing for Democrats to oppose this law when the reaction in the market was still a mystery. But now, after hundreds of businesses from Apple to Walmart have used their corporate tax cuts to improve the lives of their employees, let’s give Democrats a second chance to reject the law for their own, selfish political purposes. The vote would be clarifying.

Second, (and probably most important) it would force the Congressional Budget Office to reevaluate the fiscal impact of the tax package. The CBO is notoriously wrong about the real-world impact of governmental decisions like tax cuts. They didn’t take into account the millions of dollars that have already been pumped into the economy as a result of the tax package last month.

The lukewarm projections delivered by the CBO provided a fig leaf for Democrats and a handful of Republicans who opposed the bill at the time. Now that we have just one month of incredible returns, how about getting the CBO to re-examine their projections and shine a light onto the awful job they tend to do in projecting how free market conditions will respond to legislation?

This would also be clarifying and, perhaps, could inspire real reforms at the CBO that are desperately needed. Just this week the CBO is under fire for their embarrassing projections related to Obamacare.

“Sometimes it’s really hard to estimate these things,” (CBO Director Ken) Hall said Wednesday. “Certainly with the exchanges, we were off – we weren’t as far off on things like the actual spending, some other things – but everybody else was as well. We can be off and we can be wrong, but hopefully we’re not consistently wrong,” he said.

The CBO serves as Congress’ gatekeeper for budget matters, with its estimates often serving to boost or derail major bills.

Again, the CBO estimates were used as a fig leaf for several congressmen when voting for the Affordable Care Act in 2010. The projections didn’t come close to showing the level of chaos on the private sector as a result of Obamacare. Despite the dire projections from conservative lawmakers and free market oriented economists, the CBO figures somehow, miraculously, lined up with the desires of Democrats in The Swamp and, as usual, they were wrong.

Let’s put the CBO in the spotlight again and force them, just a few weeks after the fact, to confront their failures.

Third, it’s just good politics. Republican victories on Capitol Hill were few and far between in 2017. Why not maximize the residual benefits of one of the things they did right? Why not come right back and propose permanent tax relief without the confines of the “reconciliation” provisions employed in the December tax cut bill? Put forth permanent tax cuts, pass them in the House and force the Senate Democrats running for reelection in Trump states to vote for or against them in an election year.

Finally, Republicans and President Trump should make the 2017 tax cuts permanent now because, it’s our money, not theirs. You know, I should have led with that.

There comes a time in blackjack that it just makes sense to double down. It separates the good players from the bad. There’s a word for blackjack
players that consistently double down and double their winnings when the conditions are perfect. W call the “winners.” Republicans should try it for once.