Political stability must for progress 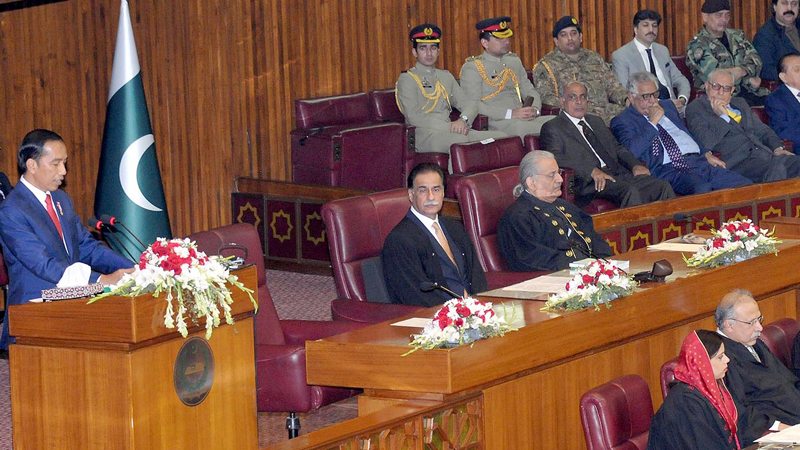 ISLAMABAD: Indonesian President Joko Widodo told a joint session of the parliament in Islamabad on Friday that conflicts and wars benefit no one while democracy was the best way to serve interests of the people.

He said that Indonesia and Pakistan were two countries with the biggest Muslim population and both were democratic states. “We are equally grateful to be able to live in democratic manners,” he said. “Most people think that managing democracy is not an easy thing but I say we need commitment to tolerate and commitment to respect each other to let the democracy function well,” he added.

“As president, I strongly believe that democracy is the best way of serving interests of our people. Democracy provides space for people in decision making process,” he said, adding democracy maintained political stability in Indonesia which helped economic growth reach above 5% per year in the country.

The president said Muslims were the largest victims of conflicts, wars and terrorism as 76 percent of terrorism attacks took place in Muslim countries, 60 percent of armed conflicts happened in Muslim countries and 67 percent of refugees belonged to the Muslim countries. He said that this alarming condition was partially caused by internal weakness, even though a lot of external factors also existed. “Are we going to let these apprehending conditions keep on happening over and over again?” he questioned. “If you ask me, I will say no. We must not allow conflicts to continue existing in our countries. We must not allow conflicts to continue existing in the world,” he declared.

Calling for an end to conflicts in the countries as well as the world, the Indonesian president said “respect for humanity should be our guide in our lives as nations.” He said history had taught that weapons and military power would neither be able to resolve conflicts nor create and maintain world’s peace.

Emphasizing the importance of dialogue, Widodo said conflict in Indonesian area of Aceh continued for more than 30 years which was resolved through negotiations. “It is the habit of dialogue that makes ASEAN, the association of 10 countries in South East Asia, able to be the engine of stability and prosperity in South East Asia,” he said. “We must be a part of solution and not part of the problem. Let us work together for the creation of peaceful and prosperous world in the name of all mankind living in this world,” he concluded.

He said the friendship between Indonesia and Pakistan was not a newly forged bond as his country would always remember the support of the people of Pakistan towards Indonesia’s struggles for independence. He said that as a token of appreciation on August 17, 1995, coinciding with the 50th Anniversary of the Indonesian Independence, Indonesia had conferred First Class Adipurna Star to Pakistan’s Father of the Nation Muhammad Ali Jinnah for his contributions in supporting Indonesia’s independence.