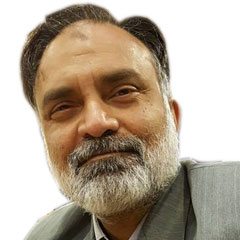 The recent statement by the Indian Army Chief which said ‘we may call Pakistan’s nuclear bluff’ has been called ‘extremely irresponsible and provocative’ by Islamabad. It is however, strange that the world has not taken any notice of his reference to a possible clash between two armies armed with the most destructive weapons known to man. Nuclear weapons are not a weapon of choice, and you don’t get to talk about them in a casual manner.

The statement by the Indian Army Chief is a manifestation of India’s state policy, which is aimed at increasing pressure on Pakistan. New Delhi thinks that right now Pakistan is under severe pressure from the USA and the western world because of multiple issues. Indeed, Pakistan is currently the target of many arm twisting tactics. Our regional environment is far from favourable, and it appears that the USA is attempting to extract some policy concessions and assistance on the ‘Afghanistan’ issue. If media reports are to be believed, there is a looming threat to Pakistan’s nuclear capability as well. To coerce Pakistan into submission, the United States may have wanted India to up the ante. India, for its own reasons, considers it an opportune time to align its policy goals with those of the USA and therefore wants to extract maximum benefit from the current tense situation.

Pakistan has been engaged in a bitter fight against terrorism for nearly fifteen years and is not interested in creating more problems for itself at the terminal stage of this war. Pakistan would rather keep the peace with India to focus on its difficult and demanding relationship with the US

However what India seems to be forgetting is that nuclear neighbours don’t test each other. If Pakistan has developed tactical nuclear weapons, it is in response to any Indian adventurism under its Cold Start doctrine, which is inherently a provocative doctrine. Indian scholars know this and so does the rest of the world. Nuclear warfare and doctrines are dynamic and not static. Each nuclear state keeps upgrading its weapons, delivery means and doctrines in response to changing technical and strategic environments. Pakistan is also responding to the changing threat matrix. And if tactical nuclear weapons have been developed and perfected by Pakistan, it clearly offsets India’s Cold Start doctrine. And this is what is upsetting the Indians. How could they accept that Pakistan has developed a capability, which is not only technically superior but also gives an edge to Pakistan in its employment with minimal risks of escalating war beyond its own borders.

The whole idea of a nuclear holocaust is pinned on the idea of mushroom (radioactive) clouds rising above major cities, and killing innocent civilians in seconds. Tactical weapons change this scenario radically and allow these weapons to be used even on its own soil against an invading army. So when the Indian Chief of Army Staff takes on Pakistan in rhetoric, one wonders what the real motives were behind his insanity. A simple miscalculation can be catastrophic. Pakistan has made it abundantly clear that nuclear weapons are for defensive purposes and meant to deter threats from its eastern borders. Why then, would India play with fire? Because in its calculus, there may be space for conventional war to attain political objectives.

Pakistan has been engaged in a bitter fight against terrorism for nearly fifteen years and is not interested in creating more problems for itself at the terminal stage of this war. Pakistan would rather keep the peace with India to focus on its difficult and demanding relationship with the USA. But as the situation is unfolding, it appears that India has opted to tread a risky path of creating a tense situation along the LoC and escalating it to a limited war. India’s likely objective is to obliterate some alleged “terrorist infrastructure” and create a divide between the people and their armed forces. With the USA breathing down Pakistan’s neck on its western borders, they assume that Pakistan would not be able to defend effectively against the Indian Cold Start manoeuvres. This will ultimately lead to a situation where Pakistan will be forced to use all means available to stem an invasion. Suffice it to say, India will trap Pakistan to use nuclear weapons to protect its sovereignty. And all this will be a result of strategic miscalculations by Indian policy makers. Having failed to deliver on election promises of economic revival — an election looming in less than 16 months — situation in India can turn ugly for the whole region.

The world has to take cognizance of the fact that the Indians have admitted to blatant ceasefire violations and have caused deaths of young men and women on the Pakistani side. Pakistan cannot display strategic restraint beyond a specific point, and it should not be tempted to restore its national pride through aggressive means. CPEC is at a stage when its maturing; the economic benefits from it will be reaped by the whole region. A misjudgement of environments and wrong conclusions drawn at this stage will only lead to regional apocalyptical scenario. Sanity must prevail in India as a miscalculation of intent and strategic environments would only lead to extinction.