Nawaz threatens to spill the beans 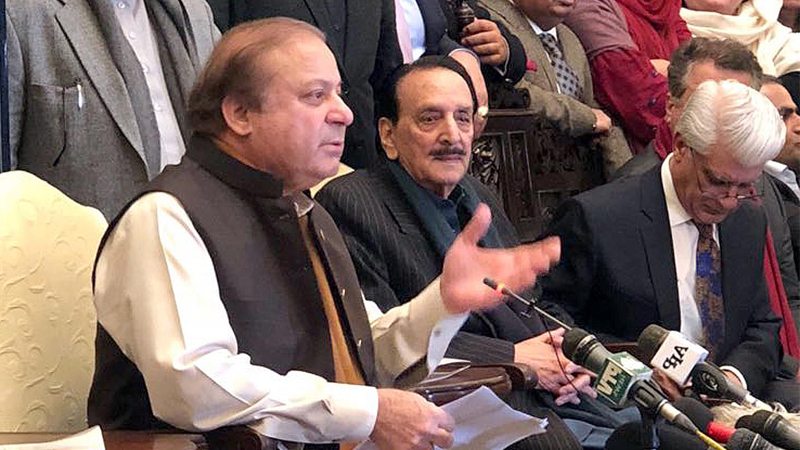 ISLAMABAD: Former prime minister and Pakistan Muslim League-Nawaz (PML-N) President Nawaz Sharif warned on Wednesday that he will put ‘all evidence’ before the nation if behind-the-scene conspiracies being hatched to rig the 2018 elections and bring a ‘ladla’ in the government are not stopped immediately.“Pakistan’s fate is linked with transparent and neutral elections. Don’t make democracy a slave of your desires. All surveys suggest PML-N is far ahead of its opponents,” Nawaz Sharif told a press conference at Punjab House in Islamabad.

The deposed prime minister stressed on all the stakeholders to let democracy flourish smoothly and not curtail a political outfit through court verdicts. “Or, I will share the details of what has transpired in the last four years with the nation,” he warned. “I shall also inform the people of the political games being played from behind the scenes at the moment,” he added.

While urging political rivals to get rid of self-deception, Nawaz said being a three-time prime minister, he was privy to several facts. “Illegal decisions and secret backdoor deals should not be undertaken to keep some parties out and the ‘favourites’ in. Those who indulge in politics of lies and sit-ins and have been repeatedly rejected by voters should not be forced upon the people,” he asserted.

“The Quaid said that the nation’s decision is never wrong, but here, over the past 70 years, either the public’s decision was twisted or their choice of leader was turned into a mockery for all to see. Because 2018 is a year for elections, this worn-out rule of the past is being applied again today,” he said, adding that a level-playing field should be given to all the parties.

During the press conference, Nawaz also lamented that his patriotism had been questioned time and again by propping up various issues, such as Dawn Leaks. He also expressed disappointment at rumors that his recent visit to Saudi Arabia was to seek some ‘safe passage’.

Coming on Trump’s recent diatribe, Nawaz Sharif termed it deplorable. “President Trump should follow diplomatic norms and values. A head of state should remember the rules of engagement while addressing a fellow state,” he observed.

Nawaz said Trump must not equate coalition support fund with aid. “We do not even need such a fund and our support should not be demanded in return,” he said.

He also stressed on to ponder reasons that why world was not acknowledging Pakistan’s sacrifices in anti-terror campaign. “If in 2001, a democratic government had been in place in Pakistan instead of a dictatorship, it [the state] would never have sold its expertise to the US. It would neither have sold our expertise, nor our self-respect,” he claimed.

“I have always asked to put our house in order first,” Nawaz told reporters, as he directed incumbent Prime Minister Shahid Khaqqan Abbasi to craft a strategy to end Pakistan’s reliance on the US aid.

He claimed that backbone of the terrorists had been obliterated and that remaining terrorists would be flushed soon. “ US president should know that as soon as we – the PML-N – came into power in 2013, we took effective steps to end terrorism in Pakistan,” he said, adding that Operation Zarb-e-Azb had ‘broken the back of the terrorists’.

“We have been fighting a war for 17 years which is technically not our war. A democratic government, unlike dictatorship back then in 2001, would never have sold its expertise to America,” pronounced Sharif. “This is not 2001. A dictator is not ruling the country … and one telephone call will not scare us,” he stressed.

“We should ask ourselves why the world never listens to us in spite of the countless sacrifices that our police, security forces, civilians and even children have given over the past 17 years. Why is our narrative not being accepted?” he questioned.