Protests — the last resort for whom?

The Fight, a documentary about the struggle for disability rights in Bolivia, holds part of the answer as to what makes a protest successful

The power of the protest is a wonderful thing. It can oust dictatorships, usher in much needed policy reforms and, here in Pakistan, remove the country’s federal law minister for a ‘crime’ that he did not commit alone. However, not every demonstration of people power manages to stir the collective conscience of our leaders; or, indeed gain media traction.

Thus the question remains: what distinguishes the politician-bashing spectacle that held the capital hostage during the recent Tehreek Labaik Ya Rasool Allah (TLYR) protest and, say, the voices raised by untold numbers of visually impaired citizens who have been demanding for many years the fundamental right to work? Why has it taken the latter so long just to have those at the helm hear them — while, by contrast, it took a right-wing grouping a mere three weeks to not just cause mayhem but to also secure the fulfilment of all their demands?

One way to answer this may be to look at whether or not particular appeals enjoy broad public support (or the opposite). For this plays an important part in determining whether or not a protest will be effective. And then there is the question of the role played by the media. Unfortunately, the latter is often driven by the ratings war; thus giving into sensationalist coverage. We should all take a moment and ask ourselves which of the two aforementioned news items gave us an adrenaline rush as we sat watching from the comfort of our armchairs?

Thus successful protestors need to be offered an incentive to enter into negotiations with those in power. Yet what sort of ‘get-out-of-jail’ card can those suffering from disability hope to wield as effectively as the 1,500 or so politically-motivated mullahs who brought the capital to its knees while directly threatening our elected leaders?

The Fight, a Guardian documentary about the struggle for disability rights in Bolivia, holds part, if not all, of the answer. This group’s sole demand: a pension of $72 per month in order to live with dignity. Travelling for 35 days in their wheelchairs to reach the administrative capital of La Paz — they bravely protested for this most basic of rights for close to three months. At times, they were subjected to extraordinary police brutality. Their entire ordeal is proof enough of their resilience. And it was not one that was embarked upon lightly. For as one of the protest leaders put it: “before we took to the road, we had tried everything”. The film also explores the social dimension when it comes to living with disabilities given that some members of the group faced familial problems.

The Faizabad sit-in and the anti-Padmavati protests might not have gained broad public support in real terms, per se, but the media’s sensationalist coverage in both instances turned the spotlight unduly on the protestors; thereby diverting attention from far more pressing issues

The protest came to a head partially and quite literally when a vehicle drove into the demonstrators, killing five and injuring dozens. The film captures just one organised revolt that constitutes part of the many that have been going on for years. And it was successful. Bolivian President Evo Morales eventually caved in to public pressure (including from Amnesty International) by agreeing to positive discrimination job quotas as well as to a $36-monthly pension for those who disabilities prevents them from working. It truly seems that had it not been for this documentary — the plight of this marginalised community in Bolivia would not have secured even these small gains.

We often gloat when it comes to our neighbours’ wrongdoings. Yet we tend to forget we share the same guilt when it comes to sheer ignorance-cum- intolerance. For around the same time as the Faizabad sit-in, India was also engulfed by countrywide protests (that are still ongoing). The focus of righteous ire over that side of the border was the release of the Bollywood period drama, Padmavati. Yet the Hindu right-wing wanted to have this banned on the basis of what they felt was the romanticising of the relationship between the Hindu queen, Rani Padmini and the Muslim King, Alauddin Khilji. The outcome to date: an indefinite ban on the film across several states. Not to mention a $1.5 million-bounty placed on the heads of both the female lead and director by a member of India’s ruling party, no less. 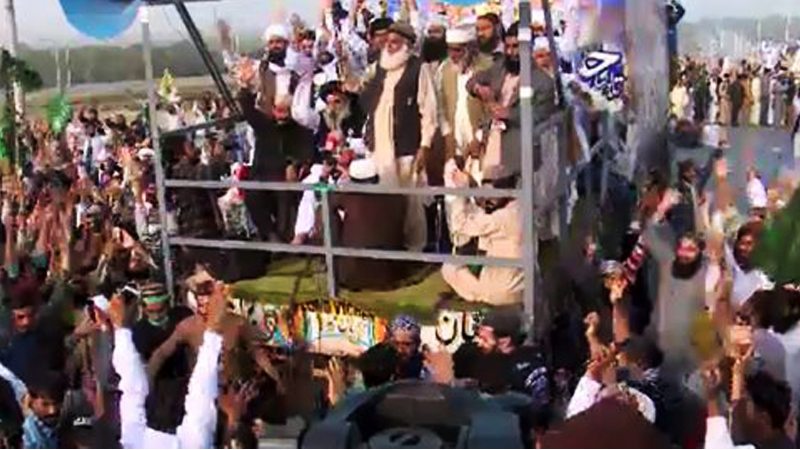 Nevertheless, having agendas met should not be the only measure of success. Meaning that those who engage in organised protests must also consider whether or not their demands reflect the will of the larger public. Towards this end, an experiment to check public opinion was conducted by Thomas and Louis (2013) in Queensland, Australia; whereby participants were divided into two different groups and given two different news pieces. One showed protestors being violent whereas the other showed non-violent demonstrations. The purpose of this was to gauge support for active dissent against Coal Seam Gas Mining and whaling under violent and non-violent conditions.

Perhaps, unsurprisingly, participants chose to back non-violence (also referred to as ‘strategic non-violence’). But here is where things become interesting. When the notion of corruption within a non-violent setting was introduced — support for violent protest in the future won the day. If we cannot carry out such experiments here in Pakistan, we should at the very least being polling the citizenry to deduce general perceptions regarding the concept of protests. After all, the latter has become more relevant than ever. This would serve to show how ‘legitimate’ particular demonstrations appear to the public as well as whether or not ensuing demands are considered priorities. Thereby determining the success of such campaigns when it comes to swaying popular opinion.

The Faizabad sit-in and the anti-Padmavati protests might not have gained broad public support in real terms, per se, but the media’s sensationalist coverage in both instances turned the spotlight unduly on the protestors; thereby diverting attention from far more pressing issues. It is time that the media acted responsibly for the greater good. Ultimately, we should think about all the atrocities that Pakistan has suffered over the past decade or so and then ask ourselves this: how many still form a part of the national discourse and how many have faded from our collective memory?