His leadership charisma; despite small failings, defied his demise. And his political legacy outlived his death. Zulfikar Ali Bhutto’s political wisdom and sagacity cannot be disputed by most of his detractors. The execution of ZAB had saddened and badly shattered his family but the public sympathy wave resuscitated new hope and determination. Grief was transformed into strength which reinvigorated the party; first under the leadership of his distraught wife and afterwards his Oxford educated daughter Benazir Bhutto who steered away the party from a near eclipse.

Post-ZAB, Pakistan People’s Party (PPP) could survive continual spells of martial law, and military regimes’ thanks to Benazir Bhutto’s dedication and capable leadership. Twice elected as premier of the country and both times ousted under corruption charges, she personally could hardly be seen as culpable. Some of her team members were not above board, though. Conspiracies hatched against her and her government need no elaboration. They in fact fatally worked against her political career.

Being hounded and haunted she finally decided to stay out of the country but ended the self-imposed exile and reached Pakistan in October 2007 against the desire of the government of the time. Benazir could not be cowed down despite threats to her personal security. On 18 October 2007, she had survived a horrendously fatal attack on her near Karsaz in Karachi but this attempt only rejuvenated her determination.

Soon after the attack, the undaunted Benazir was seen around hospitals learning about the wellbeing of injured party workers and condoled with the families who lost their loved ones. Both the conspirators and the assassins didn’t want to see her in power for the third time. Certainly, she had a programme to decisively tinker with the status quo thereby promising a substantially positive socio-economic change in the country. On a hectic schedule, the unsubdued Benazir addressed a number of election processions across the length and breadth of country.

Subsequently, on 27 December 2007, she had reached Rawalpindi to address a public gathering at Liaquat Bagh. And here fell ZAB’s Pinky to the assassin’s bullets and bombs. Amid wailing and weeping she was received in Ghari Khuda Bakhsh’s cemetery and in its bosom lies this great leader, fearless daughter of a fearless father, buried. Shock and grief overwhelmed the entire nation but people of her home province (Sindh) went into numbing deep shock seeing Ghari Khuda Bakhsh adding ‘one more grave’ to its burial ground. Perhaps, her assassins might have rejoiced at this gruesome murder.

How callous. In September this year, British Prime Minister Theresa May in her key note speech delivered at the UN General Assembly paid rich tributes to this great leader and said: “..…Benazir Bhutto was brutally murdered by people who actively rejected the values that all of us here at the United Nations stand for. In a country that has suffered more than at the hands of terrorists, murdered for standing up for democracy, murdered for espousing tolerance, and murdered for being a woman.”

With her demise the enviable leadership legacy of ZAB disappeared for good. But masses reacted vindictively, against her detractors and voted her party to power in 2008 elections. PPP under her spouse’s leadership proved the worst in governance. ZAB’s party unfortunately became a victim of corruption, inefficiency and poor discipline. Gradually, the luster it once carried started fading away and soon the political space it commanded in Punjab, KP even in Balochistan was lost in a decade. Punjab; where several people had self-immolated when ZAB was hanged almost doesn’t have space for PPP now. Sindh, the native province of Bhuttos; is being governed by PPP since 2008. The province has been suffering from massive mismanagement. 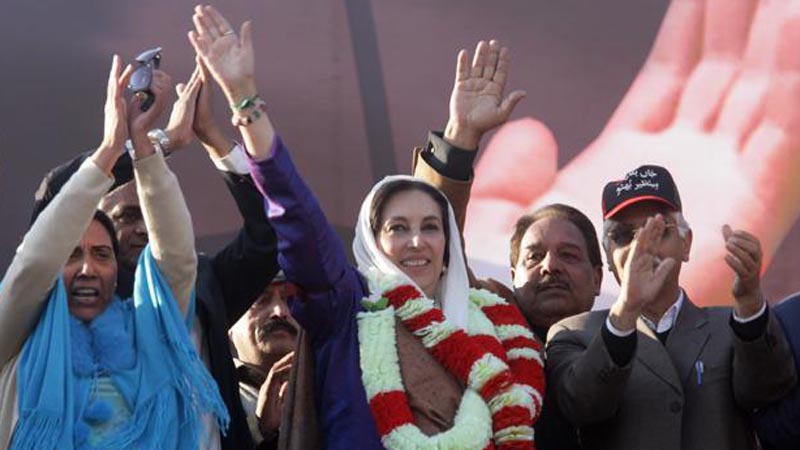 In recent years children died in droves in Tharparkar, drought proved ruthless for Tharis, and education standards are the lowest in the province, the culture of favouritism in award of ‘contract’ of development projects proved lethal for the physical infrastructure of the province. So much so the provision of safe drinking water to the populace has been an insurmountable challenge. In this regard, a few weeks back, the Chief Justice of the country while reviewing the implementation of recommendations of a judicial commission report on water issues asked the most pertinent questions from the chief executive of the province.

According to reports, more than 80 percent of water being consumed in the province is impure. Institutional decay runs deep. Political interference in the working discipline of institutions has left a bad taste. A few months ago, the Supreme Court had to pass an order cancelling the result of the Combined Competitive Examination conducted by Sindh Public Service Commission due to massive mismanagement and suspecting nepotism and favouritism.

Episodes of corruption and indiscipline are a millstone around the neck of the party. Once being the largest party attracting smaller ones to join or make political alliances will now seek strength from smaller parties to survive the political obscurity it is confronting. The loss of its luster is mainly due to indifference of party leadership at various tiers.

About a month back; a video went viral in social media showing one of the party leaders while talking with a person of his constituency disparagingly remarking on the sanctity of the ‘vote’. In a similar nature, a picture of a party leader was seen on social media ‘intimidating’ voters to vote for the party in a by-election for a vacant seat in interior of Sindh. Generally, the perception is that the party has not suffered the loss of public popularity even during martial law and military led regimes than under the current leadership.

Watching a drooping party profile even the traditional voter of PPP in Sindh now holds different opinions about the party. This is mainly due to the erratic behaviour of its current leadership. The latter has been pursuing purely vote oriented policies oblivious to the desire of the general public that wants ‘good governance’.

Owning a few feudal lords with tenacious hold on the electorate is perhaps a good strategy to secure the vote bank but it fails to win over the ‘good will’ of the voters. The latter doesn’t have a dependable alternative political force in Sindh to opt for. It looks like soon the party will subsequently meet its old silently entombed in Ghari Khuda Bakhsh if the incumbent leadership doesn’t bring change in the behaviour of the party. People endear a political party that endears them. Here lies the public popularity of a political outfit and not in a tasteless exercise of merely renaming public buildings, places, and roundabouts with the name of a slain party leader.