LAHORE: Lahore High Court (LHC) has on Monday set aside the notification of Absar Alam’s appointment as Pakistan Electronic Media Regulatory Authority (PEMRA) chairman, removing him from the position.

Justice Shahid Karim had remarked that the case was being heard for the last 18 months and yet the record had not been submitted before the court, reserving his decision in the case.

PEMRA’s lawyer told the court that Absar Alam had a vast experience of working at various news channels and paid heavy taxes against his income. Meanwhile, the petitioner Munir Ahmad’s lawyer pointed at the irregularities in Absar Alam’s appointment as the chairman of the media regulatory body.

Azhar Siddique pleaded before the court that the appointment was in violation of the laws and that Absar Alam had failed to fulfil his duty as the chairman of the authority.

After hearing the arguments from both sides, the court ordered Absar Alam’s removal from the position, declaring setting aside the notification of his appointment.

Talking to media after the the decision, Azhar Siddique said that the high court had set aside Absar Alam’s notification, declaring that the appointment wasn’t transparent.

He said that the government had changed the minimum qualification for the post from Masters to Graduation only to accommodate Absar Alam and it was never a tenure appointment. “Then in the violation of all the rules, his salary was raised to Rs 1.5 million (excluding taxes) in April 2016”, he said.

He added that Absar Alam had been appointed by the ruling Pakistan Muslim League – Nawaz (PML_N) and former Prime Minister Nawaz Sharif on political grounds. “Channels like ARY and Bol were issued notices in order to silence their voices. Many programs were taken off air, including those of Arshad Sharif, Mubasher Lucman, Dr Shahid Masood, Asad Kharal and Aamir Liaquat, in order to silence them. Besides, PEMRA did nothing to prevent the channels from airing the anti-judiciary campaign run by Nawaz Sharif and his daughter Maryam Nawaz”, he said.

In light of the decision, Absar Alam immediately relinquished the charge as chairman of PEMRA. 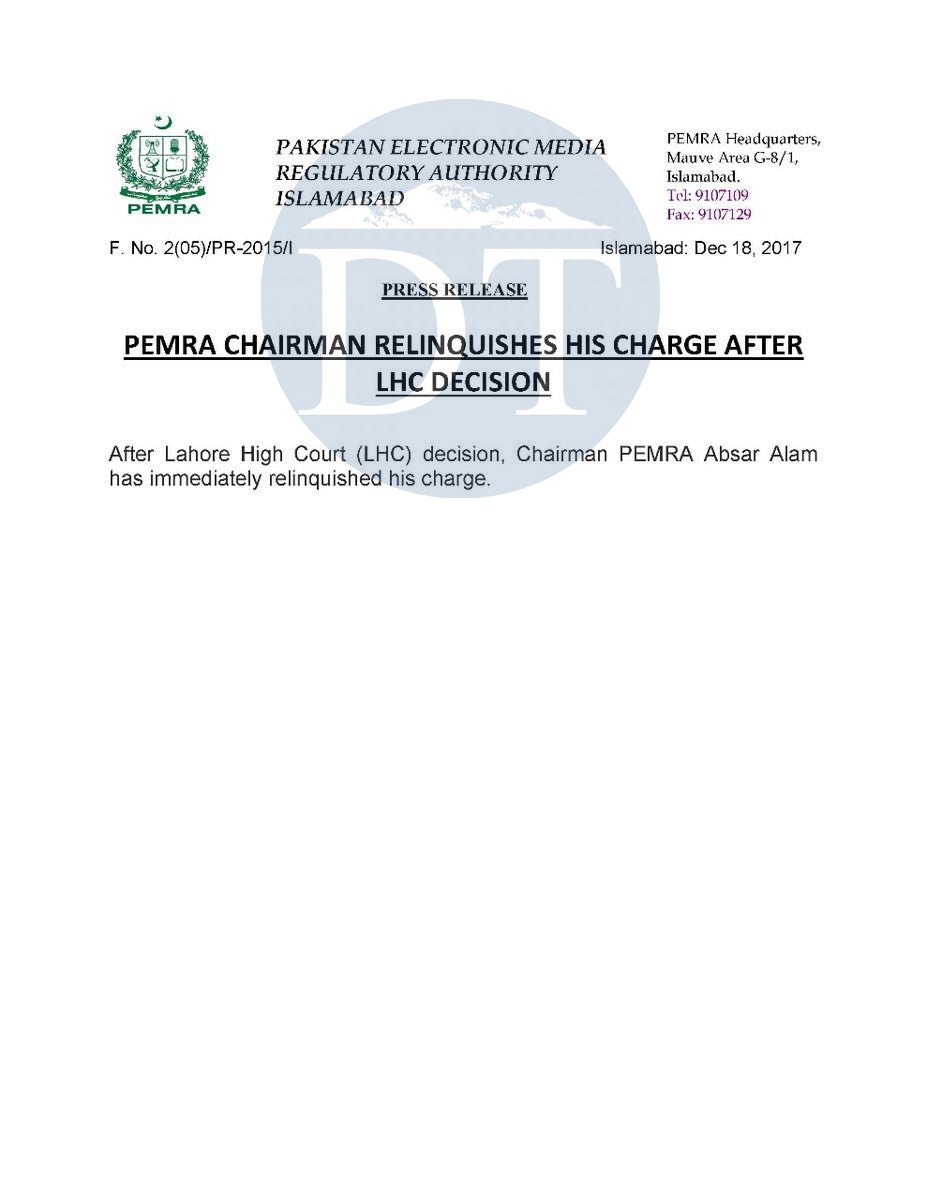