PPP — past, present and hopes for the future

The party might do well to play the silent observer. For as Napoleon once said: “Never interrupt your enemy when he is making a mistake”

The Pakistan Peoples Party (PPP) is currently in the midst of both a grave leadership and administrative crisis. Yet it had not always been this way. For the party is borne of a glorious past. And it is one that took shape back on November 30, 1967 at Dr Mubashir Hassan’s Lahore residence. He was among the political icons of the time that went on to be the PPP’s founding members.

Meaning that back then, communism had more ideological currency in Asia than did global capitalism. After all, this was the 1960s where the former prevailed in both the USSR and China. Moscow, at that time, was ruled by Khrushchev and represented the world’s largest nation in terms of both landmass and population. Beijing, for its part, had Chairman Mao at the helm.

It was therefore quite possibly recognition of these geopolitical realities that prompted Bhutto to adopt socialism as a political system for a ‘new’ Pakistan. For this would have as an added bonus bringing the country closer to both the USSR and China, thereby ending its dependence on the US. In his book, Last 323 Days of Bhutto, Colonel Rafiuddin recalls a conversation he had with the party leader. The latter was of the opinion that “[t]here is no more sincere friend of Pakistan than China, and we should not compare China with any superpower.

Since Russia is also a superpower and our regional neighbour, we should have good relations with it. However, it would be a mistake to rely on America, it being a selfish nation.”This undoubtedly reflects Bhutto’s astute political insight and helps us to understand the PPP’s manifesto within the geopolitical context. Just as it explains how the party came to be infused with rich socialist ideology.

Thus the PPP manifesto took the following as its four basic principles: “Islam is our Religion; Democracy is our Politics; Socialism is our Economy; Power Lies with the People.” Bhutto’s charismatic personality combined with his popular slogan of Roti, Kapra, and Makan (food, clothing, and shelter)struck a chord with millions of working- and middle-class people across the country. And so it was that upon assuming power, the PPP drafted the 1973 Constitution based on the principles of a socialist economy. Bhutto then set about nationalising industries.

Nevertheless, charm and public support have never been enough to rule Pakistan. Meaning that the latter soon found himself with no other option than having to appease the Islamic clergy. 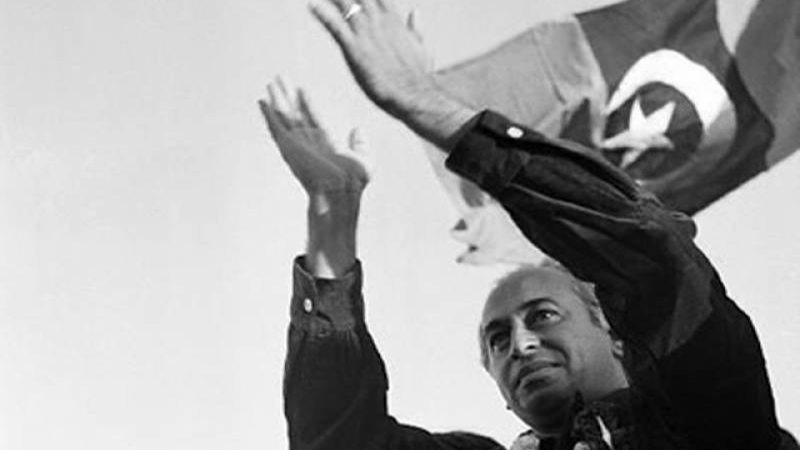 This took the form of the constitutional amendment of September 7, 1974 that recast Ahmadis as non-Muslims. Not only that, he also capitulated to the demands of the right-wing grouping, the Pakistan National Alliance (PNA) by banning the sale of alcohol to Muslims; while replacing Sunday with Friday, the Muslim holy day, as the weekly holiday.

Yet Zulfikar Ali Bhutto’s biggest blunder was still to come. In 1976, did he appoint Ziaul Haq as his Army chief. This he did upon the recommendation of General Tikka Khan. Meanwhile, the Cold War was at its peak. And the US was not happy with Pakistan’s apparent tilt towards the communist bloc. Thus following the 1977 elections, opposition parties began conducting nationwide protests. During this period, the PNA gained momentum under the banner of enforcing Islamic laws Nizam-e-Mustafa as well Sharia.

Rumours began circulating at this time that the Alliance was being bankrolled by both the CIA and the industrial class that had lost their business interests to Bhutto’s nationalisation drive. Gen Zia ultimately imposed martial law before jailing and hanging ZAB on April 4, 1979.

And even if Washington had no hand to play in these events — it remained the political actor who benefitted the most from this country’s bout of military rule during the Soviet occupation of neighbouring Afghanistan. Thus, almost as if by magic, the Pakistan that had been tilting towards the communist bloc under Bhutto’s leadership was once more gripped firmly in an American embrace.

If Bilawal is to play catch-up with Maryam Nawaz — he will have to learn how to stand defiant and unflinching before undemocratic forces, while placing a socio-democratic mandate at the heart of his politics. For only in this way can he hope to reignite the famous Bhutto charisma

The PPP had to wait until the dark years of the Zia dictatorship came to an end before it got another chance at the Centre; when it won the 1988 elections. The party is said to have won some 96 seats out of 207 while the Islamic Democratic Alliance (IDA) secured just 55 seats. Benazir Bhutto became the first woman Prime Minister that the Muslim world had ever seen. But this was not to last. Just two years later and her government was dismissed when President Ghulam Ishaq Khan dissolved the assemblies under Article 58 of the Constitution.

During the next round of polls (1990), the IDA rose to power with the establishment’s support. Indeed, the petition filed in the Asghar Khan Case contends that the latter heavily financed the rigging of elections to keep Benazir out of power. Thus Nawaz Sharif assumed the premiership for the first time.

Yet fast-forward three years to the 1993 elections and the PPP secured 89 seats while the Pakistan Muslim League (PML) won 73 seats; meaning that the former was elected into power for a third time. But then President Farooq Laghari in 1996 sent the Benazir government packing once more by invoking the power bestowed upon him by Article 58(2b) of the Constitution. Thus did Nawaz Sharif bounce back after the 1997 elections and he remained sitting pretty until his regime was toppled by Gen Pervez Musharraf’s military coup some two years later.

Pakistan would have to wait until May 14, 2006 for Benazir and Nawaz as well as other political players to join hands to sign the Charter of Democracy. Just over a year later on October 5, 2007 — Gen Musharraf issued the National Reconciliation Ordinance (NRO).

This granted amnesty to politicians and others wishing to return to the country; thereby ending the country’s culture of political vendettas and victimisation. Later that year, Benazir returned to Pakistan with a view to contesting the next elections, which naturally irked anti-PPP forces. Not only that, she was equally vociferous in her condemnation of the armed radicalisation that was escalating at Lal Masjid as she was in her support for the subsequent military operation to clear the mosque right in the heart of the federal capital.

This naturally further infuriated those with an extremist religious agenda as well as her traditional opponents. And they did not wait long to strike. Their first attempt in Karachi on October 18, 2007 failed. But they were soon able to boast of success. That day came on December 27, 2007 at Liaqat Bagh in Rawalpindi.

The PPP was to go on achieve electoral success in 2008 — with many claiming that Benazir’s assassination afforded them the sympathy vote. Yet this remains debatable given that the party lost its traditionally strong support hold both in the Punjab as well as in Khyber Pakhtunkhwa (KP).

At that time her children were minors and therefore unable to enter the political scene. Asif Ali Zardari tried to fill the PPP’s leadership vacuum — but it is said that his reputation for corruption rendered him one of the most loathed politicians in Pakistan. Yet this was the work of a relentless character assassination campaign that lasted for many years, especially in the Punjab; and was conducted by anti-PPP political forces as well as the ever omnipresent establishment. Thus as the elections played out, the dire performance of the party in the country’s most populous province was attributed to the Zardari factor. The net result of which was that the PPP’s political influence — with the new leadership at the helm — became restricted to interior Sindh only. Thus it was only with the help of allies such as the Awami National Party (ANP), the Muttahida Quami Movement (MQM) and the Jamiat Ulema-e Islam (F)that the party was able to form a government. Indeed, the PPP has yet to recover fully from the loss of Benazir Bhutto.

Today, the party has but two options.

Firstly, it could establish ties with the establishment; not dissimilar to what the PML and its allies(including the IDA)managed in the past. This would allow the PPP to emerge from Sindh and reach deep into Pakistan’s other provinces. It should also be mindful of taking advantage of the MQM’s political collapse to regain influence in Karachi.

Secondly, the PPP could play the role of silent observer as the ruling party hurtles rapidly towards its fate. For as Napoleon once said: “Never interrupt your enemy when he is making a mistake.”Given the political vacuum left by a much weakened PMLN — the PPP could work quietly behind-the-scenes to try and gain as much ground as possible. However, the chances of this happening are rather low given how Imran Khan’s Pakistan Tehreek-e-Insaf (PTI) is not about to do anything that might concede political space to the PPP either in the Punjab or on its home turf of KP. Thus it seems more than likely that the former will be once more confined to interior Sindh.

Yet it is not all doom and gloom for the party. For there is a proverbial silver lining and it comes in the form of Bilawal Bhutto. The latter has, of course, just embarked upon his political career. Meaning that there is no real dirt on him, as such. Indeed, Maryam Nawaz represents his only real challenger; especially given how she has already crossed the finishing line to consolidate her credentials as the sole torchbearer for Pakistani democracy. Thus if Bilawal is to play catch-up — he will have to come out of his father’s shadow, while adopting the classic “Bhutto” style of politics. Towards this end, will he have to learn how to stand defiant and unflinching before undemocratic forces to win the hearts and minds of the working-class. Similarly, placing a socio-democratic mandate at the heart of his politics is non-negotiable. For only in this way can Bilawal hope to reignite the famous Bhutto charisma. And if he manages this — he may just be able to rally the old guard as well as ideological PPP supporters behind him.

The writer is CEO and Chairman of Haider Group of Companies and hosts a current affairs talk show on PTV News. Follow him on Facebook at: www.facebook.com/syedzishanhyder/