Asia Bibi, an internationally known Christian victim of blasphemy confined in prison is facing another lonesome Christmas missing her family, children and the community. In 2016, the entire Christian world including the Pakistani Christian minority was expecting her release but exactly on the day of the hearing, Justice Iqbal Hameed-ur-Rehman recused himself from the Court bench because he believed there would be a conflict of interest; as he was also part of the court penal who decided Mumtaz Qadri’s case, and deemed it improper to be part of a bench for deciding Asia Bibi’s case.

The court was adjourned for an indefinite period of time by the then senior most Judge of the bench and present Chief Justice of Pakistan, Justice Saqib Nisar referring the case to the then Chief Justice for constituting a new panel excluding Justice Iqbal Hameed-ur-Rehman.

Since then, the new hearing date was never scheduled. Unlike Pakistan, the international Christian community believes courts are not free to decide cases, especially blasphemy cases. In 2010, Asia Bibi was the first woman awarded the capital punishment of hanging to death by the Session Court Judge, Muhammad Naveed Iqbal. During the PPP government, Asif Ali Zardari, the then President of Pakistan hinted a pardon for Asia Bibi, for that Salman Taseer, the then Governor of Punjab visited Asia in the prison to gather first-hand information of the case. After his meeting with the victim, in a press conference, he criticised blasphemy laws deeming them ‘black laws’.

This aroused the anger among fanatics and he was assassinated by his own fanatic guard Mumtaz Qadri in 2011. Later in 2014, the High Court of Lahore, not only upheld the verdict of the session court against Asia, but issued a stay order against presidential pardon which remains in force till today.

On the other side, Justice Saqib Nisar, the present Chief Justice of Pakistan has not scheduled the hearing date for Asia Bibi, and due to this she has been left in the darkness of uncertainty. In the latest conflict between TLY and the government, once again notorious agreement between the said religious pressure group and the PML (N) government that Asia Bibi will not be sent out of the country but would be hanged according to the verdict came to the fore. This has brought more difficulties for Asia Bibi who is already confined in an 8 by 10-foot cell of prison with no windows. In spite of her deteriorating health, she is bound to cook her own meals because others may try to poison her food. On this Christmas too, she is prepared to cook a private feast for her with a hope that Supreme Court of Pakistan might consider her hearing date in near future. After the execution of Mumtaz Qadri, apparently, it will be a challenge for the Apex Court to decide against the wishes of fanatics but justice demands accuracy and professionalism and its implementation. Without a doubt, her death sentence in the first place was due to the pressure of local Muslims and their state supporters. However, the High Court while ignoring the error of law and due process in the lower courts, was determined to uphold her death sentence.

After the postponement of hearing in 2016, her case is in limbo which has exposed Asia to extreme vulnerability as at least 10 million Muslims are willingly ready to kill her because of her so-called blasphemous act

Ashiq Masih, husband of Asia submitted an appeal for clemency to the President of Pakistan in 2014 but because of the High Court Stay Order, no action could be taken against the submission. In 2015, the Supreme Court of Pakistan suspended the sentence till the process of law is completed at the top Court. After the postponement of hearing in 2016, her case is in limbo which has exposed Asia to extreme vulnerability as at least 10 million Muslims are willingly ready to kill her because of her so-called blasphemous act.

Though she had denied allegations in the court, the local cleric of Sheikhupura and others were the strong witnesses against which the Session Court was compelled to reach the verdict of the death sentence against Asia Bibi. Ironically, the witnesses at the Sessions Court are not ready to re-appear as they believe that repeating the alleged blasphemous comment by Asia Bibi in any other court, could bring blasphemy cases against themselves too. 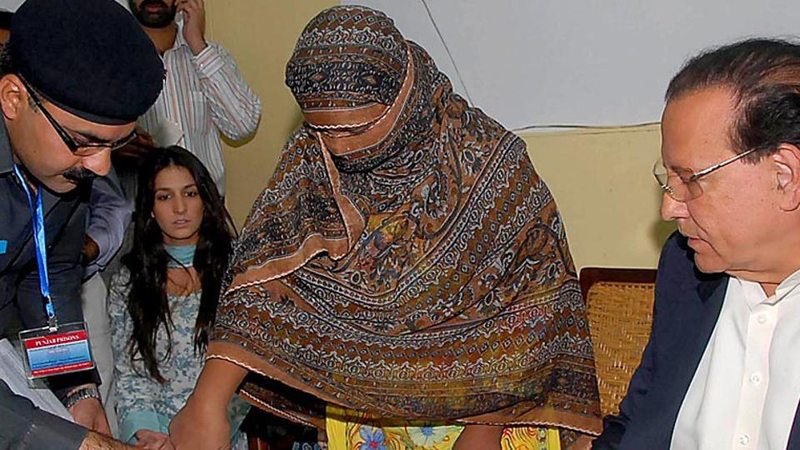 Due to this, justice has been overshadowed by the aggression of religious fundamentalists. In January 2017, Asia’s attorney requested the Chief Justice of Pakistan, Justice Saqib Nisar for a new hearing date but it was declined. Recently, the honourable Chief Justice has said, Supreme Court is also like a government.

Through the ever-growing involvement of the courts in the national administrative structure, it is obvious that marginalized sections of the society are also looking towards the Supreme Court of Pakistan. In 2018, the Christian minority of the country as well as the international community is expecting a hearing of Asia’s case. The fanatics’ equation of Asia’s blasphemy case with the execution of Mumtaz Qadri is highly illogical, the later assassinated the Governor in broad daylight and justified his actions in the service of Islam. According to criminal procedures, the state recognized him as a killer and murderer, and therefore justice was served at the end. Asia was allegedly involved in the case by her neighbour and other co-workers who later involved the local Cleric of the Mosque.

As a result, the petty issue of a sip of water from the same utensil used by her Muslim co-workers, turned into a blasphemy case. In a country where sitting and retired judges support and garland assassins like Qadri, justice for helpless communities becomes very expensive. Unfortunately, courts have never taken into account the lunatic mayhem of thousands of schizophrenic fanatics chanting for Qadri’s heroism during his hearings in the courts.

His execution proved there is no justification of the crime and equally justice should be done to a suffering soul, not in the light of mounting pressure from fundamentalist but to prove there is rule of law in the country. I hope this Christmas and New Year brings hope of life for Asia Bibi.