Dedicated to Malik Maqbool Ahmad whom Amin Rahat Chughtai has never seen in person, the book Maraahil comprises essays on criticism, research and learning. Amin Rahat Chughtai is now 87 years old and is still busy writing research based essays like in the book under review which has 24 essays written by the author. These essays have been penned in different spans of time, collected altogether in the form of Maraahil.

The author spent six decades with the naat saying of Akhtar Hoshiarpuri who died on March 18, 2007. Author of sixteen books, ‘Khair al Bashar’ was Akhtar’s fourteenth book, the fourth on naat saying. He was equally competent in ghazal saying. His five books on naat Saying have three predominant characteristics; humility, respect and non-traditional approach (Page 9). Jalil Aali, a prominent poet from Rawalpindi has been referred to by the author with respect to his ‘Naatia Kalaam,’ quoting the observations of Prof. Asloob Ahmad Ansari who labels Jalil Aali’s long naat ‘Noor Nahaya Rasta’ (path bathed with light) as dawned upon the poet instead of it being a conscious effort.

Topics include personalities, their ideologies, works and impact on the society. Some topics contain historical perspectives of dynasties and places but mostly the contents are of literary nature

A very interesting story about the actual grave of Abu Al Muani Meerza Abdul Qadir Bedil (1644 – 1720) has been narrated. Chughtai deliberates upon the fact that Bedil had said in his will that he be buried in the courtyard of his house but confusion prevails, and his grave has been changed thrice by various influential persons of their times (Page 26). It may be noted that Bedil was not only held in high esteem for his position by Ghalib and Iqbal but Afghanistan and Tajikistan also consider him a great poet. He has been deprived of his real grave since 231 years. Tajikistan’s President Rehmanoff once requested Indian Prime Minister Narinder Modi on his visit to India that he desired to visit Bedil’s grave but was declined on the pretext of security reasons and was presented with a painting instead, showing peacocks dancing in the courtyard (Page 26).

Chughtai dwells upon Renga, an ancient domain of Japanese literature. While he worked as Press Advisor in the Japanese embassy for 27 years, he came upon ample opportunities to study Japanese literature and write a maximum number of essays in Urdu on Japanese literature. Renga became popular between the thirteenth and sixteenth centuries. Tan Renga stands for a ‘short poem’ based on 31 sound members. Chorenga on the other hand, depicts a ‘long poem’. According to Wikipedia, Renga (collaborative poetry) is a genre of Japanese collaborative poetry — poetry written by more than one author working together. A Renga consists of at least two ku or stanzas. The opening stanza of the Renga, called the Hokku, became the basis for the modern Haiku form of poetry. Two of the most famous masters of Renga were the Buddhist priest S?gi (1421–1502) and Matsuo Bash? (1644–1694). Two essays on Haiku are also included in the book under review.

Chughtai is the first Urdu writer to write an essay on the life and works of Hungarian, Jewish writer Georg Lukas. The latter ruled the domain of criticism in Europe for almost a hundred years. Despite being a communist, he continued criticizing the bureaucracy of Stalin (Page 49).

Chughtai was also the first poet to recite a poem in praise of Faiz Ahmad Faiz. It was published under the title ‘Dast-e-Saba Kei Naam’ in the Daily Imroze on February 12, 1954. Faiz was under detention in Montgomery Jail in those days. Editor Tufail Ahmad advised changing the title as to ‘Faiz Ahmad Faiz Kei Naam’. Through his solitary confinement and during the same time Faiz’s ghazal ‘Gulon Mein Rang Bhare’ came out on January 29, 1954. Faiz was never influenced by the tyrannies of captivity and used to say whatever he desired to say (Page 61).

Chughtai not only dwells upon the contributions of poets and writers but also spreads into the domain of history. He writes on the rise of Mongols in the East of the Altai Mountains. Turks and Mongolians lived side by side but Mongolians used to capture the territories of their lazy neighbours. Expansionist tendency was given a practical shape by Tamujan, later known as Changez Khan. His success in almost all of his adventures whether in China, Russia or India were credited to his horsemen and war-planning. In 1225, on return from his Western ventures, he was planning to invade China when he fell from his horse after hunting and became bed-ridden, succumbing to his injuries a few days later. His second son Ogadai succeeded him. Historians say that the Mongolian Empire was the largest empire in the 13th and 14th centuries. 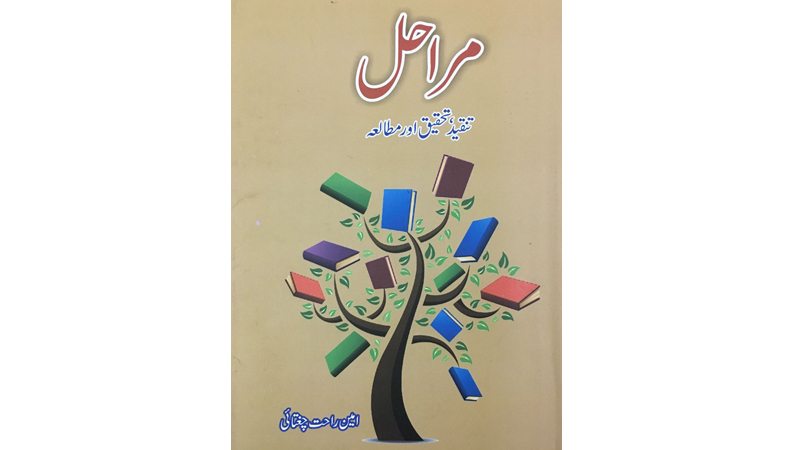 In a submission ‘Ahmad Nadeem Qasmi Ki Nazaryati Shakhsiat’ (ideological personality), the author goes through the history of Nadeem becoming Secretary General of the All Pakistan Progressive Writers’ first conference on November 11, 1949. Mostly comprising communists, Sajjad Zaheer was apprehensive about Nadeem being non-communist. On the pretext of exchange of letters between the two, Nadeem was arrested under the Public Safety Act in 1951. Despite the incident, Nadeem believed that if extremism was reduced in the socialist system and the economic structure of Islam was understood, then there was not a lot of difference that existed between the two ideologies (Page 68). Chughtai then shares some memories of the Progressive Writers’ Movement in a separate essay (Page 75).

Dr. Wazir Agha’s poems in ‘Hum Ankhain Hain’ are under discussion in another essay titled ‘Sur Nadiya’. In his book ‘Rainbow of Reflections,’ each poem has a beginning, a body and an end, all knitted in beautiful words that entice the reader to give serious attention to the questions being raised. The perceiver enjoys reading each poem because of the wide canvass that it introduces, both in its text and meaning. Take the example of the nazm titled, ‘Takween’. It reflects the strength and the intensity with which the instrument Iktara creates ripples on the surface of water. If that is not enough, the ripples turn into a sea of musical notes and many hands seem to be turning out from the vast sea to reach to the shores. The bottom line of this poem is that one phonation, descending or otherwise, could create an impact in the Universe. The other poem titled ‘Titanic’, printed on the flap of the book, points out to the hidden strength of a glacier inside a human being, without realizing that it can hurt the happiness hidden inside of him too.

Other essays in the book under review are on the character development of Hakim Barakati, columns of Jamiluddin Aali, novelist Salma Awan, Inshaiya writer Jamil Azar, Jamali as a representative poet of young emotions, Dr. Naseema giving importance to the treatment and use of proverbs in our daily routines, Mamoon Aimen’s poetry and Mansoor Aqil as a poet enhancing the traditions of Jiger Muradabadi. The reader can judge this observation from a couplet by Mansoor Aaqil that says ‘Na Jane Kyun Dum-e-Rukhsat Dharak Raha Hei Dil/Kahin Yei Tum Sei Mulaqaat Akhri Tau Nahi’ (I wonder why my heart is beating faster making me wonder whether this was our last meeting – Page 134).

Amin Rahat Chughtai finally analyzes his own book from earlier, ‘Zara Barish Ko Thamne Do’ (Page 180). His book depicts the gradual transformation from the aspiration of youth to the maturity of realism that is a forte of old age. Occasionally one comes across love poetry but majority of the poems present gravity and depth of ascendancy.

Maraahil winds up in Amin Rahat Chughtai’s travelogue to Delhi titled, ‘Dill Keh Aik Sheher Tha’ (Dilli – once upon was a city). His criticism and appraisal are both elaborative and concise in their presentations in the book under review. The topics comprise personalities, their ideologies, works and impact on the society. Some topics contain historical perspectives of dynasties and places but mostly the contents are of literary nature – a good reference book by a senior writer.