Dabistan-e-Iqbal the centre that commemorates Iqbal and his message

Visiting Dabistaan-e-Iqbal is an immersive experience in Allama Iqbal’s world. The centre has made a good attempt to create an atmosphere of learning which would resonate with the great philosopher-poet of the East

While Iqbal’s message in syllabuses and cultural discourse remains scarce, a centre dedicated to his legacy seeks to fill a space that has too long been left to bureaucratic fickleness. While educationists still debate whether Iqbal’s message – which is based on Islamic principles – is suitable for Pakistan; the centre continues to host activities that aim to promote Iqbal’s message.

For the layman, Iqbal’s thought comes across as ambitious; and scholars of Iqbal would not object to such an observation. Even his better-known verses require an alternate understanding of the self, God, the cosmos and mankind to attempt a clear reading. But all too often Iqbal has been shunned as a heretic, blasphemous and un-Islamic; something that has led to the study of his works being vastly in decline. There is no syllabus in Pakistan where Iqbal is taught to students across the private or public schooling system or at the university level. This dearth of Iqbal studies in Pakistan is paralleled with immense respect and courses on his philosophy overseas; in Iran, Turkey and Germany. There, Iqbal has been referred to as the inspiration behind their freedom movements and his views on government and the practice of Islam is believed to be synonymous with the teachings of the Quran. More visibly, in Germany commemorative plaques and streets have been honoured with his name.

Whilst Pakistan still makes up its mind about the significance of its intellectuals, these countries revere Iqbal as a philosopher, academic, poet and politician. But Pakistan has done little to promote his thoughts past his involvement in the independence movement because his ideas instigate debate and introspection about our stifling social structures. The decline of his teachings in our syllabus, literature and universities is a testimony to a systematic removal of his teachings from modern Pakistani society.

Situated in the midst of modern Lahore, in Gulberg II, Dabistan usually has an open gate and cars can be seen parked outside as people attend its numerous classes. The centre has classes on art, calligraphy (nastaliq), music, languages (Arabic and Farsi), a regular Iqbal Forum meeting and motivational groups. The centre was formed in 2012 and now welcomes some 50 to 60 people regularly.

The centre also has a publishing title under its name through which a book titled ‘Thoughts of Iqbal’ by Brig (r) Taimur Afzal Khan was published in 2016. The book is a translation and compilation of ‘Afkar e Iqbal’ by Justice Javed Iqbal.

The book translates and explains Allama Iqbal’s verses in light of his philosophy about the self and God. It has been divided into various chapters which are related to the ego and various other themes such as ‘Ego, time and space’, ‘Ego, God, Universe and Human being’, and ‘Collective ego’.

The writer, who is also an associate member of Dabistaan-e-Iqbal, describes the centre as an NGO for promoting the Iqbalian message. Speaking on behalf of the centre, Mr Taimur discussed how he wants the centre to, “Move along with the modern world, and convince scholars, non-scholars, youth and the common man that the Quran is the source of guidance for a society based on justice and peace.” 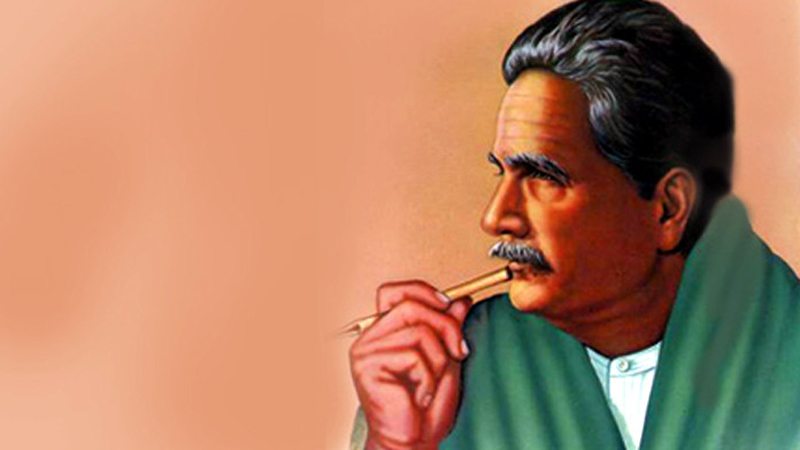 Further he said he said that Dabistan was looking forward to expanding into education, “We aim to provide a balanced modern education based on language and structured to create a balance between science and religion. We also want to focus on character building.”

Dabistan also inaugurated the Tehreek-e-Azaadi Museum in January 2017 located near the Wagah border.

While the government still decides to make Iqbal Day a national holiday again, the centre remains a constant reminder of Iqbal and his message for the multitude of people who visit the centre. Rare photographs of him adorn the walls; Iqbal sitting on a couch with his walking stick by his side, Iqbal in a group photo with other people involved in the creation of Pakistan. Iqbal’s personal hand writing has also been rewritten in gold, expanded and framed with ellipses and cuts to show the process that led to the creation of his works.

In another room, large scale oil paintings of scenes from his poetry that merge natural and supernatural images adorn the walls.

Visiting Dabistaan-e-Iqbal is an immersive experience in Allama Iqbal’s world. The centre has made a good attempt to create an atmosphere of learning which would resonate with the great philosopher-poet of the East. More than anything, the people who frequent the centre are its biggest patrons. A conversation with them is often telling of the inspiration behind visiting the centre, the interest they have in the subject, and their hopes to see a Pakistan where the vision of Iqbal thrives.

With centre’s such as this, the future for Iqbal’s message seems to be making head way.