M is for Mahira, Malala and Maryam

It all started with allegations of sexual harassment levelled against Hollywood hotshot producer Harvey Weinstein. Then came the #MeToo movement on social media. This saw more than 50 actresses and those working in other areas of the film industry come forward; opening up about similar experiences at the hands of the now fallen-from-grace movie mogul. It soon went viral; travelling around the world. Suddenly, women everywhere, from different walks of life, were seizing the opportunity to share their stories. It is indeed a sad indictment of our times that despite all the awareness about women’s rights, our increasing contributions to every field, not to mention our determination to succeed — we still face violent threats to our security in terms of rape and harassment. So effective a tool is social media and so inspiring has the #MeToo campaign proven that it has been embraced by women here in Pakistan. In a society not lacking in religious and cultural taboos — many women silently bear the burden of crimes committed against them, all so their families are not defamed and they themselves are not questioned or, even worse, blamed for what has happened to them.

Thus when Pakistani women stand up and share, discuss or debate sexual harassment this is in itself a commendable move; one that not only shows courage but also a willingness to speak out. Yet while social media is an essential platform when it comes to raising awareness it also has a dark side. And it is where we see women malign — another M word — other women. Unfortunately, trolling has become a favourite way to pass time here in Pakistan.

First, it was the actress Mahira Khan. Whilst filming in a foreign country, she took a short break. She did what thousands of people do everyday without a second thought: she took time out for a cigarette with a colleague. However, things are never that simple. Not when the latter happens to be Bollywood superstar Ranbir Kapoor.

Are we suggesting that Mahira crossed international borders to simply dress a little less conservatively. Have none of us seen how women here dress at various social gatherings or red carpet events? Pakistani women are increasingly wearing what they want to because it’s their prerogative

Tongues immediately started wagging, as they have a tendency to do. Almost immediately came the paparazzi snaps of the pair with such salacious taglines as: ‘Mahira and Ranbir caught red-handed, Mahira exposed’. Yet there is some truth in the old adage about a picture speaking a thousand words. Meaning they both looked rather bored, looking in opposite directions; clearing wrapped up in their respective nicotine fixes. In other words, hardly the stuff of a scandal.

The second problem was not so much with whom Mahira was smoking — but just the fact that she was enjoying a sneaky cigarette. Yet here is where things become a little unclear. For although, generally speaking, women smoking is frowned upon in Pakistan — many go ahead in any case. Naturally, there will be judgements but it is not exactly a red line. And as far as the images of Mahira go, she appears relaxed. Therefore everyone would do well to let it go.

And then, the third issue is that her outfit has been described as rather revealing. But what exactly are we suggesting? That she has crossed international borders to simply dress a little less conservatively. But what are talking about? Have none of us seen how women here in this country dress at various social gatherings or red carpet events?

Pakistani women are increasingly wearing what they want to because — well, why not — it’s their prerogative. They are only answerable to themselves, their religious beliefs and, at times, their families. There may well be a fine line between right and wrong. Yet its exact position is seen differently by everyone. What may be saintly to some may appear blasphemous to others. The tragedy, however, is this: instead of proudly sharing photos of a young Pakistani woman who is going places in her career — we are only interested in trying to shame her. 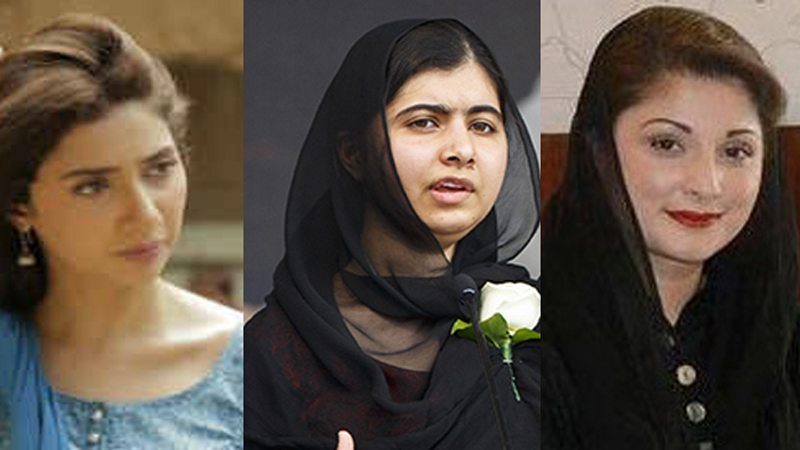 Even Malala Yousafzai has not been spared. Now studying at Oxford University, she committed the cardinal sin of walking down the street in a pair of jeans. Facebook users wasted no time in accusing her of becoming westernised; of forgetting her values and of being two-faced and all the rest of it. Never mind that she was covered from top to toe and even had a scarf over head.

Indeed, being the daughter of a former Prime Minister is not sufficient to grant immunity when it comes to having one’s wardrobe policed by those ever vigilant cyber warriors. Of course, Maryam Nawaz is no naïf when it comes to using social media to her political advantage. But that really doesn’t justify the manufactured outrage upon hearing of how she may have dared to wear western clothes while visiting her mother in a London hospital. Her detractors appear to expect her, regardless of where she might be, to dress like the archetypical Pakistani woman politician. And to them, this means nothing less than a long-sleeved shalwaar-kameez complete with dupatta over the head. Thus it is a serious no-no to even think of venturing out in a jacket and trousers without a full-face of make-up.

This is about more than a handful of people disapproving of certain actions. It seems to have reached epidemic proportions. And the most alarming thing is how so many are willing to blindly jump on the bandwagon. Without a second thought; without wanting to put themselves, even momentarily, into someone else’s shoes. Thus is everyone reduced to mere entertainment fodder. And as they chomp down on the latter — their independence of thought flies out of the window. Meaning that they simply parrot others’ words. Thus when a twenty-something year-old girl from Pakistan’s tribal areas makes waves abroad — they can’t help but smell something fishy; accuse her of ‘foreign’ backing; and when happening upon a snap of her going about her daily business, they can barely contain their sheer glee as they clap their hands and shriek: “see, we told you!”

And now, allow me, if you will, to make the most of a little alliteration. #MeToo may be a momentous movement — but maligning others is not. Let us show some mercy towards Mahira, Malala and Maryam. Let us drop the question of female modesty and recognise these women for what they are: adults free to make their own decisions. If we are looking for something to do, we could always hold up a mirror to ourselves. Let us all make our New Year’s resolutions a little early and vow to be moderate and serious. To be mild-mannered and supportive. In short, let us learn to live and let live.

The writer is a senior media professional with experience in Broadcast Journalism. She can be reached at shamahf2@gmail.com