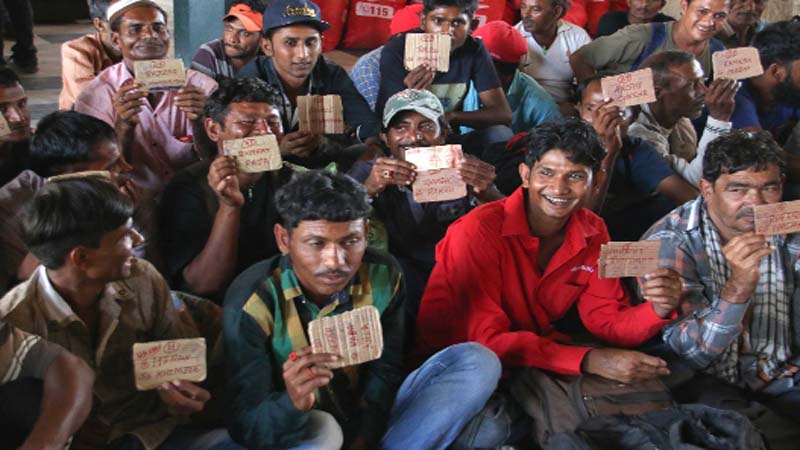 KARACHI: As many as 68 Indian fishermen released from Malir district jail in Karachi will reach Lahore today where they will be handed over to Indian authorities at the Wagha border.

These fishermen were released as a ‘goodwill gesture’ on the directives of the Interior Ministry.

Naseem Siddiqui, a senior official of the Sindh Home Department, told Daily Times that directives were issued in this regard on Saturday.

On Sunday morning, a ceremony was held at the jail premises where the 68 fishermen were given Sindhi ajraks and sweets. Afterwards, the fishermen were taken to Karachi Cantonment Railway Station where they boarded the Allama Iqbal Express headed for Lahore.

According to jail officials, the fishermen will reach to Lahore’s City Railway Station on Monday morning. From there, they will be taken to the Wagha Border and will be handed over to Indian Authorities.

Talking to the media before their departure, the fishermen said that during their imprisonment, they missed their families. They said the jail authorities treated them well. “We celebrated Diwali at the jail for which authorities arranged sweets and firecrackers,” said a fisherman, Ashok Kumar.

Afaq Sami, a senior official at jail, said that except for the two fishermen from Uttar Pradesh all others belonged to the state of Gujrat. He said these fishermen were arrested separately during the last three years for violating Pakistan’s territorial waters.

As per Pakistani law, minimum imprisonment for illegally crossing the border is three months and maximum is a year. However, these 68 fishermen spent up to three years in the prison.

Muhammad Ali Shah, the chairman of the Pakistan Fisherfolk Forum (PFF), said the Indian authorities’ failure to follow up on the arrests would be a factor in the delay in the release of these fishermen. Poor diplomatic ties between the two countries often delay release of fishermen who cross over to the other side unknowingly. Pakistan and India frequently arrest fishermen along the maritime borders and both navies also seize the catch and boats. In Pakistan, fishermen arrested in such a manner are prosecuted under the Foreigners and Fisheries Act and are often sent to the Malir jail.

Muhammad Ali Shah said he hoped that Indian authorities would reciprocate and release Pakistani fishermen held captive in jails in the country.

“The frequent arrest of fishermen from either side has made life of their families miserable in both countries,” he said.

Earlier in July, Pakistan had released 78 Indian fishermen held for trespassing into its territorial waters.

61 Afghan nationals held at the Malir jail have also released as a goodwill gesture. Jail authorities said the Afghan nationals were released on Saturday and sent to Quetta, from where they will leave for Afghanistan through the Chaman border.