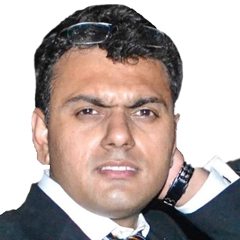 For some time now, I have been restricting my speech — which may otherwise be perfectly lawful — out of fear of being labelled a blasphemer or a traitor

Never before now had I thought about my personal safety since friends and close acquaintances frequently advise me to be cautious in view of the increasingly intimidating atmosphere in the country.

For some time now I have been restricting my speech, which may otherwise be perfectly lawful, out of fear of being labelled a blasphemer or a traitor. Critical and dissenting speech is rapidly being circumcised and criminalised in Pakistan, either through disproportionate laws or by vigilantism.

Just a few days ago, a learned acquaintance posted a status on FaceBook whose tone was supportive of the controversial blasphemy laws without paying any attention to the various incidents of murder, lynching, and vandalism that have taken place in the name of these laws.

The person is associated with the country’s topmost top public institution where elected representatives of the people regularly chant slogans in support of democracy and supremacy of the Constitution. The FaceBook status of my learned acquaintance read: “The desirable decision of blocking social media sites for spreading defamatory content, will ultimately cast positive impacts on family connections, which have been deteriorating for a long time”. In a nutshell, the person was supporting crackdown on dissent in the guise of blaming social media for injecting non-social behaviour in Pakistani society. This time, I couldn’t help but respond to the status by asking if the person supported silencing expression in online spaces? The reply was in affirmation.

In times like ours when a haunting wave of crackdown against political dissidents has already hushed up thousands, one must be ready to face the music for professing ‘liberal secular’ ideology — even if it is within legally prescribed limits of speech.

In Pakistan, (mis) use of blasphemy laws and intolerance towards those criticising these laws is an infamous norm. There is no disagreement that sanctity of all religions and their venerated personalities is a key to maintaining harmony among different faiths in a heterogeneous society, and hate speech and speech that may incite violence should be dealt with according to global standards.

Nevertheless, drawing the line between legitimate speech and hate speech is an arduous task that has been done quite extensively at some of the highest forums internationally. A case in point is the Rabat Plan of Action. This plan was approved by a UN intergovernmental body in 2013 after a series of consultative meetings of member states. Interestingly, the plan is based on the UN Human Rights Council’s resolution (16/18) that was co-sponsored by Pakistan. The resolution called for combatting intolerance, negative stereotyping and stigmatisation, discrimination, and incitement to violence against any person based on their religion or belief. The Rabat plan defines hate speech and draws its boundaries in a comprehensive manner. Even after five years, no effort has been made to implement the plan.

The question of prohibitions on blasphemous speech is very relevant in Pakistani context because of the long history of misuse of vaguely drafted laws — that are debatable and even repealable in many people’s opinion because of their disproportionality with global standards.

The issue of blasphemous speech has had a long history of being misused for settling of personal petty disputes in different parts of the world, either to protect beliefs of the majority or to target faith-based minorities, particularly non-believers. Seemingly – both scenarios would be applicable to Pakistan. Far from the standard of holding someone innocent until proven guilty, those accused of blasphemy in Pakistan are usually not even given a fair chance to prove their innocence as they become victims of mob justice or street violence. A glaring example is the killing of former Punjab governor Salmaan Taseer.

The role of Pakistani courts is also questionable for not delivering justice in time. Unwarranted delays in due process of law have resulted in prolonged imprisonment of blasphemy accused like Junaid Hafeez, former lecturer at Multan’s Bahauddin Zakariya University. Hafeez has been detained at the Sahiwal jail since 2013.

These are some of the reasons why global standards including the Rabat plan call upon states to repeal blasphemy laws from their statutes.

Finally, a new and lethal trend has been witnessed in Pakistan with regards to use of blasphemy as a pretext to suppress progressive voices on social media. Beginning in October 2015 with the case of Saqlain Haider, convicted by an anti-terrorism court for 13 years, an increase has been noted in frequency of such instances. The brutal killing of Mashal Khan was among these instances. Other incidents like the bloggers’ abductions involved certain state institutions. To silence progressive voices, the issue of blasphemy was used to provoke the masses and to threaten progressive voices on social media. With the fear of being attacked ever present, this progressive minority seems to have sidelined itself somewhere at the periphery of the society.

The writer is a journalist and digital rights researcher. He works for Bytes for All, Pakistan. Follow: @advertbalcha