Nearly half a million people of Pakistani origin call United States their home. The education and income levels in this Pakistani-American community are significantly higher than those in the US population in general.

Education and income levels: Among college age population of Pakistani-Americans, 56% have at least a bachelor’s degree, much higher than 33% Americans with college degrees. Of this population segment (25 years and above), 23% have masters or Ph.D degrees.

Pakistani-origin doctors in US: Pakistan is the third biggest source of foreign doctors in the US, according to OECD.

A vast majority of doctors from the American-Muslim community are of Pakistani origin. Among them is Dr Mark Humayun who was awarded top US medal for technology by President Barack Obama in 2016.

Pakistanis in Silicon Valley: Silicon Valley is home to around 12,000 to 15,000 Pakistani-American families. Thousands of them are working at leading technology companies like Apple, Cisco, Facebook, Google, Intel, Oracle, and Twitter.

Pakistani-Americans in entertainment and sports: Kumail Nanjiani, a Pakistani-American actor-comedian, recently made headlines with the successful release of his feature film The Big Sick on hundreds of screens across the US. It is a cross-cultural romantic comedy based on actual events that breaks new ground by casting a Pakistani-American in a lead role. Acquired by Amazon Studios for $12 million after a bidding war at Sundance film festival, the film has already grossed over $36 million so far.

Shahid Khan, a Pakistani-American engineer who made his multi-billion dollar fortune in auto industry, became the only non-white owner of an NFL franchise team when he bought Jacksonville Jaguars for $760 million in 2011.

Kamala Khan is a new Marvel comic book character created for Marvel Entertainment by Pakistani-American Sana Amanat. This was a part of the American comic giant’s efforts to reflect a growing diversity among its readers.

Academy Award winning Hollywood hits Frozen, Life of Pi and The Golden Compass have one thing in common: each used extensive computer-generated imagery (CGI) created by Pakistani-American Mir Zafar Ali who won Oscar statuettes for “Best Visual Effects” for each of these movies. 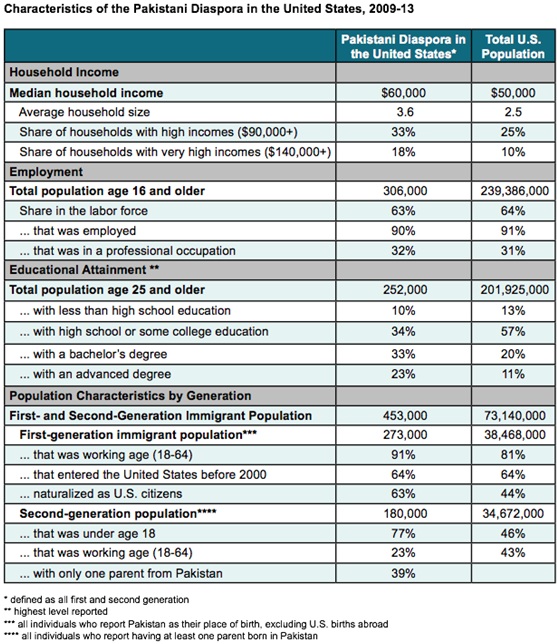 Trump’s America: Like members of other ethnic and religious minorities, Pakistani-Americans may also be alarmed by the increasing bigotry in the US ever since the election of President Donald Trump. This is particularly true of places like New York’s Little Pakistan were Pakistanis were targeted after 9/11 terrorist attacks. At the height of the sweep, over 20,000 people in Brooklyn’s South Asian communities had left the US, a COPO survey found. Many sought political asylum in Canada and Australia, and some returned to Pakistan and other countries. A number of them never returned. Many had their legitimate US immigration applications pending at the time. Others had their cases in immigration courts and they were waiting for disposition by judges.

A thriving community: The aforementioned statistics show that with a few exceptions most Pakistani-Americans are thriving in their respected fields. They have significantly higher income and education levels than the general US population. Besides contributing to their respective fields, Pakistani-Americans are active in local community activities and their organisations routinely help raise funds for schools, hospitals and other civic amenities back home in Pakistan.