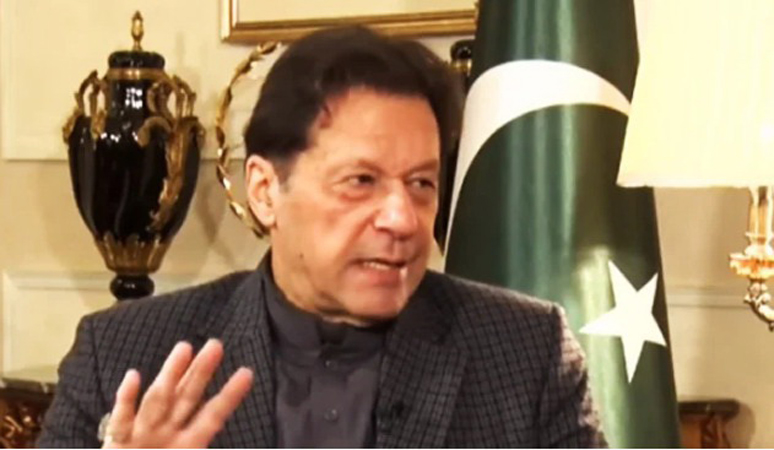 “I knew that they plotted to attack me,” he said in an interview with a private news channel. He lamented that he couldn’t file an FIR according to his will despite his own government in Punjab.

Speaking on the names proposed for the interim chief minister in Punjab, Imran Khan said that his party and allies gave trustworthy names for the post in the province.

He also slammed the candidates named by the opposition claiming that one is Pakistan People’s Party (PPP) Co-Chairman Asif Zardari’s frontman, while the other is Shehbaz Sharif’s. “One name was involved in regime change against us. If the Election Commission appoints such a man, we won’t accept it,” the PTI chairman asserted.

Although the caretaker CM in Khyber Pakhtunkhwa has taken his oath, the opposition and government in Punjab are still at odds over the appointment. As a result of their persistent contention, the Election Commission of Pakistan (ECP) will now decide the matter. Terming the recently-held local government elections in Karachi as “pointless”, Imran Khan said: “Elections have not taken place in Karachi.”

Complaining about the results of the polls, he asked how the people of Karachi could possibly elect the PPP. “Karachi’s residents have great awareness; how can they elect PPP?”

Imran Khan, in his interview, also commented on the numerous problems in Sindh and said that the province’s situation was “the worst” across the whole country.

“PPP’s corruption has brought Sindh to ruins,” he said.

The former premier termed the people of Sindh and Karachi as the most oppressed given the city’s state and the delays in its progress. Khan said he knew he “had to” go to Karachi.

Commenting on “rampant corruption” in the country’s sprawling metropolis, the PTI chief said that construction work in the city was slow because builders had to pay Rs30 million for each permit, which went to the “Zardari” system. “The builder told me so in front of the chief secretary”.

Imran Khan further lambasted the election commission for being “asleep” since it had failed to take concrete measures against the PPP for rigging the polls. “All parties insist that there was rigging,” Khan said.

The former prime minister also dismissed the Toshakhana case by saying that the entire matter was being blown out of proportion.

“The government and the handlers together blew the Toshakhana case out of proportion. When we asked for others’ Toshakhana records, we were told it’s a secret,” he said. To a question, Imran complained about former chief of army staff General (retired) Qamar Javed Bajwa’s altered behaviour after being granted an extension in tenure as the military’s head.

“General Bajwa changed after the extension and compromised with the Sharifs. He decided, at that time, to give them the National Reconciliation Ordinance (NRO).”

Reiterating his claim about the ex-army chief hiring Hussain Haqqani – Pakistan’s former ambassador to the United States of America – to topple Khan’s government, the PTI chief said: “They hired Hussain Haqqani through the Foreign Office and we didn’t know. They met Haqqani in Dubai and hired him in September 2021.”

Imran Khan added that the former diplomat began lobbying against him in the United States and promoted General (retd) Bajwa.

The ex-prime minister said he hoped for the post-Bajwa establishment to be neutral but complained that “Mr X and Mr Y asserted their pressure in Punjab and threatened our people to join the PML-N.”