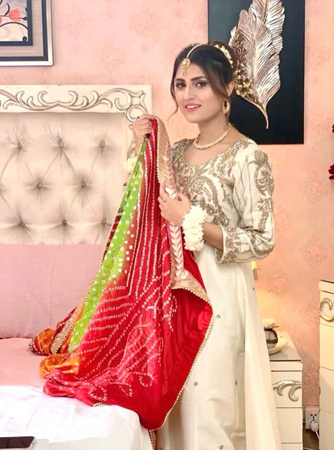 On Thursday, Hussain shared a two-picture gallery from the sets of her on-air drama serial on the photo and video sharing application. “Ramsha smiling after successfully trapping Faizan,” she wrote in the caption with a flower sticker.

For the unversed, her caption was in reference to the latest episode 32 of the play where she got married to the main protagonist, Faizan, essayed by Arez Ahmed. The episode aired hours before she shared the Instagram post.

It should be mentioned here that Hussain plays the character of Ramsha, the love interest and now-wife of Faizan in the show.

The play – written by Sadia Akhter and directed by Saqib Zafar Khan – targets the burning question of society, “Is Marriage the Solution for Every Problem?”

It airs daily at 7pm only on ARY Digital.