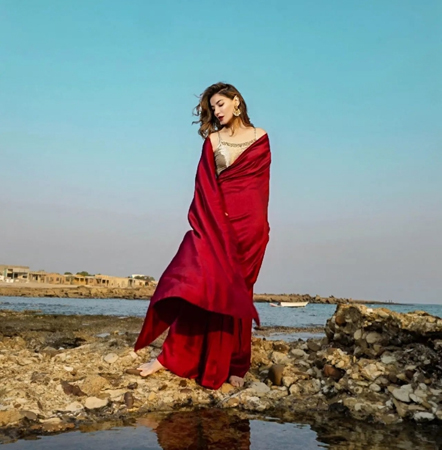 The saree pictures of actor Navin Waqar are going viral on the social media application Instagram. Navin Waqar shared viral pictures of her wearing blue and orange sarees on her Instagram account. She swooned over netizens with the pictures that garnered thousands of likes and heart-warming comments.

Navin Waqar has millions of Instagram followers. She takes to the platform to share pictures and videos of her personal life and professional endeavours.

Earlier, the actor won hearts with a picture of her in a black shirt and red coat. A click of her in an elegant kurta shalwar became a hit.

Navin Waqar has not only taken the modelling industry by storm but has also proved herself as a force to be reckoned with in the drama industry.

She won audiences and critics with her performance in ‘Bewafa.’

Navin Waqar married Azfar Ali in 2012. They parted ways in 2015. She admitted it was difficult for her to get over her split.

In an interview, she said it was tough for her to go through that time of her career as it had just begun. The actor added that she came into the spotlight from the start for good and bad reasons.

The actor added that she did not post anything about her divorce on social media as media would get involved. The celebrity said it made her more protective of her personal life.

“Every person goes through something or the other in their lives and it leaves them with not such pleasant memories or experiences. Lesson learnt!” she said.