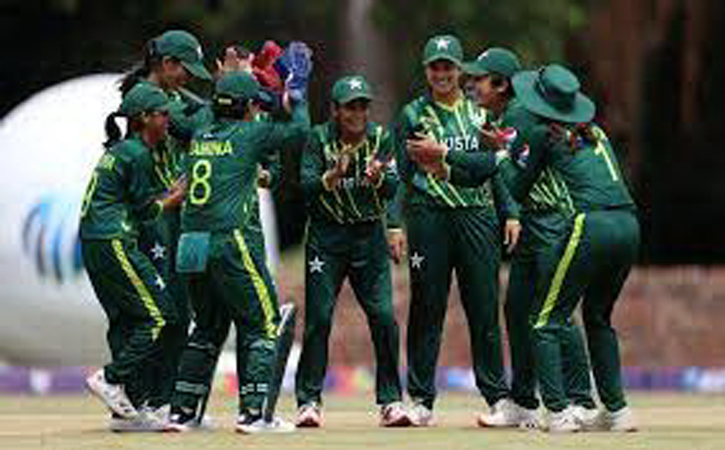 LAHORE: A comprehensive, 10-wicket win over Zimbabwe assured Pakistan of a second-place finish in Group B and qualification to the Super Six League stage of the ICC Under19 Women’s T20 World Cup in Potchefstroom, South Africa on Thursday The victory, which came courtesy of an unbroken opening partnership of 100 between Eyman Fatima and Shawaal Zulfiqar, while chasing a modest target of 98, meant Pakistan finished behind England with Rwanda’s historic win over Zimbabwe also guaranteeing them passage to the Super Sixes. Fatima was in aggressive mood with a 35-ball 62 not out, which featured 10 fours and the two sixes in Pakistan’s innings, while Zulfiqar – who hit the winning runs with a four off Zimbabwe captain Kelis Ndhlovu in the 11th over – was more sedate with a watchful and unbeaten 32 (30 balls, six fours) as they cruised to victory.

Faced with a must-win match if they were to take third place from Rwanda in the group standings and advance into the Super Six stage of the tournament, Ndhlovu did her level best to vindicate her decision to bat with a fighting 42 off 35 balls (seven boundaries). The catch was that with the exception of Adel Zimunu (13), Kay Ndiraya (11) and Natasha Mtomba (10), none of her teammates got into double figures, and Ndiraya and Zimunu’s run-outs did not help the cause.

So, when Ndhlovu popped a return catch to medium pacer Laiba Nasir to be the fourth wicket to fall with the score on 86, Zimbabwe’s chances of getting a competitive total disappeared with her dismissal. While they did not bowl Zimbabwe out, Pakistan were content to keep things tidy on the bowling front, with reliable left-arm spinner Anosha Nasir again spear-heading the attack with figures of 2/21 to give her batters a comfortable chase. Their chase was so leisurely that they had time to be watchful in the first two overs, but still overhauled the target by the 11th over.

Pakistan won by 10 wickets with 9.1 overs to spare.