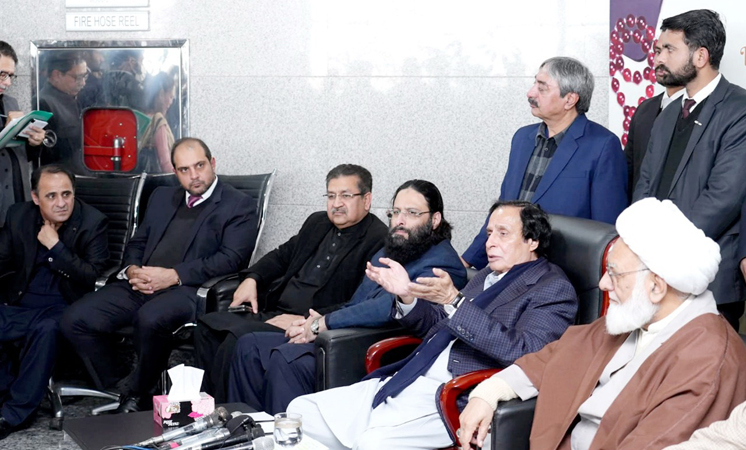 The portal will also issue alerts to the concerned institutions in order to block the controversial material and for taking stern action against elements involved in uploading such a material. CM stated that through Hurmat-e-Quran Kareem Portal the websites of those involved in doing condemnable activities will be blocked. Registration and monitoring of publishers and e-publishers will also be carried out with the help of this system.

The CM while talking with the media representatives stated that the Punjab government has taken a milestone step by making Hurmat-e-Quran Kareem Portal and also to check disrespect to Quran-e-Kareem or making changes. PITB has developed a software in collaboration with the Quran Board which will issue a prompt alert on the publication of a change in the name of Khatamun Nabiyeen (SAW) or a change in the Ayat or translation of the Holy Quran.

The CM acknowledged that the Quran Board, Ulema-e-Karam and PITB had done a splendid work in a short span of two months. He lauded that Dr. Arslan Khalid, Faisal Yousaf and his team has done a great service to the religion by making Hurmat-e-Quran Kareem Portal. CM in reply to a question to the media stated that Imran Khan is an honest and an upright leader adding that Imran Khan is the only leader after Quaid-e-Azam who does not speak a lie. Imran Khan has the spirit to serve the masses while the Sharifs start speaking lies after getting up in the morning. The Sharifs and Rana Sanaullah keep on telling lies till late night. We have to make our own Opposition Leader and will turnout Raja Riaz. Raja Riaz should himself feel ashamed and should quit the post of opposition leader.

CM Pervaiz Elahi stated that PML-N leaders should be asked about the return of Nawaz Sharif. He apprised that a second tower will be established with Arfa Kareem Tower likewise twin tower. The CM denounced that everyone focused his attention on minting money and no one thought about exporting software. He said if Bangladesh can earn billions of dollars by exporting software then why not we can earn?

Meanwhile, Pervaiz Elahi launched a province-wide vaccination campaign to prevent the second possible wave of lumpy skin disease and inspected the vaccination used in this drive.

Six million doses will be provided to livestock farmers at no cost and directly to their homes. The government has given 1.5 billion rupees for this effort, the chief minister noted and added that Punjab has procured the vaccine at a more economical cost compared to other provinces. With over 25 million cattle and 28.4 million buffaloes in the province, the chief minister highlighted the vital role livestock plays in the economy, contributing 14.1% to the national GDP and 63% to the agriculture sector, with 37% of village incomes generated from livestock.

Meanwhile, Chairman Punjab Board of Investment and Trade (PBIT) Qaiser Iqbal Baryar, Saleem Baryar and Ahsan Saleem Baryar called on Chief Minister Punjab Chaudhry Pervaiz Elahi at his office and discussed matters of mutual interest and exploitation of investment opportunities in the province.