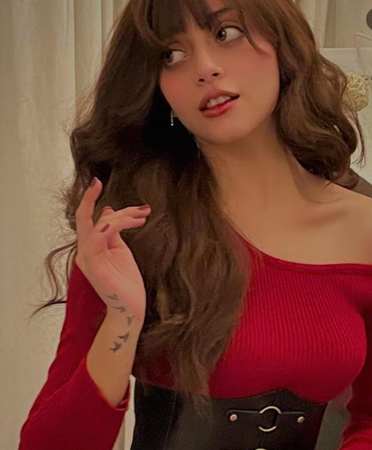 The ‘Taqdeer’ treated her over four million Instagram followers with the latest pictures of herself on Tuesday morning. “Things look beautiful if you forget what they can do,” Shah wrote in the caption on the photo and video sharing application.

The five-picture gallery sees the celebrity in a bold red off-shoulder top paired with a black corset belt for a chic look. She carried her signature long curls with fringes and doll face makeup in the clicks. The viral pictures were showered with love from her fans on the gram with thousands of likes and lovely compliments for the celebrity in the comments section. Apart from being a social media darling with 4.1 million Instagram followers, Alizeh Shah also enjoys a huge fanbase in the offline world, thanks to her impressive performances in a number of superhit serials including ‘Dil Mom Ka Diya’, ‘Mera Dil Mera Dushman’ and the telefilm ‘Chand Raat Aur Chandni’. Meanwhile, on the work front, the actor was last seen as the protagonist Romaisa in the drama serial ‘Taqdeer’. The ensemble cast of the play included Sami Khan, Zain Afzal, Asim Mehmood, Javed Sheikh, Bahroz Sabzwari, Maryam Noor, Alia Ali and Khalid Anam.