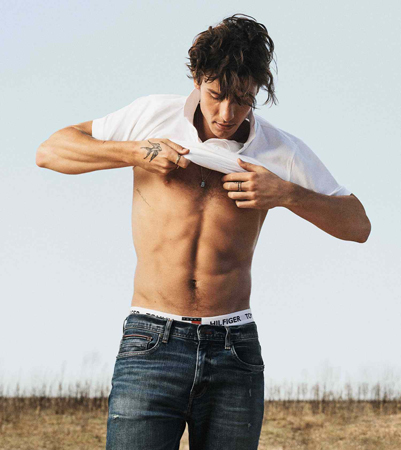 The pop star wore a light grey sweater over a white T-shirt, navy pants resting below the black waistband of his Calvin Klein boxers, white sox, black Birkenstock clogs and a dark grey scarf wrapped around his neck.

Mendes was last seen sporting his previous hairstyle as recently as Dec. 25-Christmas Day, in an Instagram video he shared of himself from a hiking trip with friends, which saw him strip down to his boxers and enter a freezing river, a popular winter dare typically dubbed the polar bear plunge.

Mendes has not announced his plans for 2023. Last year, he cut short his world tour, explaining on social media that he “had to postpone the past few weeks of shows since I wasn’t totally prepared for the toll that being back on the road would take on me.”

He said that after speaking with his team and health professionals, it became clear that he needs to take more time to “ground” himself. He added, “This doesn’t mean I won’t be making new music and I can’t wait to see you on tour in the future. I know you all have been waiting so long to see these shows, and it breaks my heart to tell you this but I promise I will be back as soon as I’ve taken the right time to heal.”