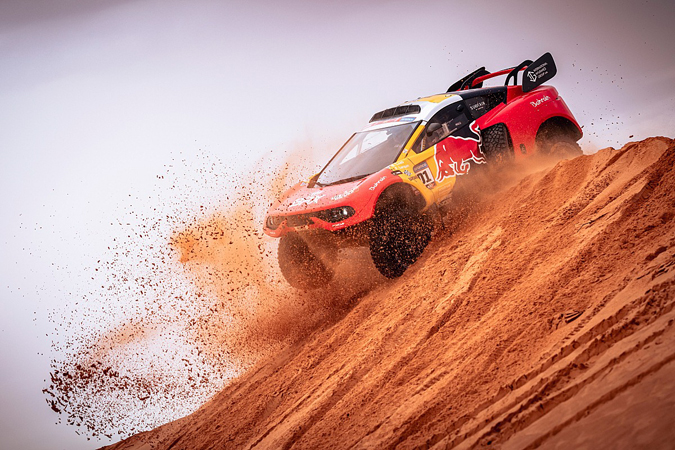 RIYADH: Frenchman Sebastien Loeb won the ninth stage of the Dakar Rally, a special 358km trek between Riyadh and Haradh, for Bahrain Raid Xtreme on Tuesday while Carlos Sainz’s Audi had a major crash. Loeb finished over three minutes ahead of Teltonika Racing’s Lithuanian Vaidotas Zala, while GCK Motorsport’s French driver Guerlain Chicherit was third as racing resumed after a rest day. The stage win was the second in a row for nine-times world rally champion Loeb and his third overall in the 2023 Dakar.

“It was a good drive. We got a bit lost in some places, in some, I think, very complicated way points,” said Loeb. “The lines of the motorbikes were wrong so we had to turn around and to search for them. But I think it was complicated for the others too because Guerlain Chicherit arrived level with me at that place and then he finished further behind. “We had a good stage. We lost five to seven minutes with the navigation, but I think it was difficult, we could have lost much more.”

Loeb moved up to third overall but is one hour 43 minutes and eight seconds adrift of Toyota’s defending champion Nasser Al-Attiyah, who came a disappointing eighth on the stage. The Qatari driver now has a lead of one hour 21 minutes and 57 seconds over nearest rival Lucas Moraes of Brazil, with the rally ending in Dammam on Jan. 15. Earlier, Spaniard Sainz suffered a crash six km into the stage when his car fell upside down on a dune. In the motorcycle category, Luciano Benavides of Argentina won the stage for Husqvarna, finishing ahead of Australian Toby Price for RedBull KTM Factory Racing and American team mate Skyler Howes.