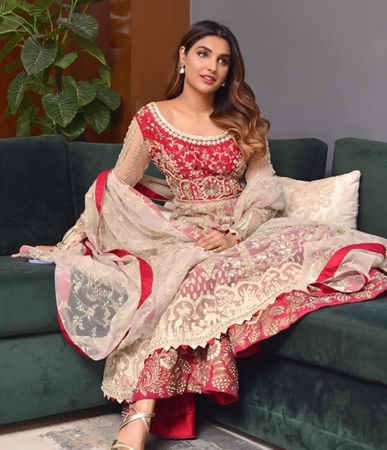 Amna Ilyas brought smiles with her latest pictures and video that are going viral on the social media application Instagram.

Amna Ilyas shared her viral pictures and video on the picture and video-sharing platform. They showed her all smiles in elegant eastern wear.

Her latest social media posts got thousands of likes and heartwarming comments from fans.

The celebrity breaks the Internet with clicks and clips on Instagram.

Earlier, she looked simply stunning in the images of her in a dashing outfit.

The pictures show her wearing an orange-coloured outfit with blue jeans. She donned a red scarf. She posted an emoji of orange as its caption.

Earlier, she stirred controversy by posting a kick-challenge video.

The challenge asks a person to kick off fruit from the top of another’s head. In the new-deleted video on Instagram, she missed her shot and ended up kicking a man on the head.

The ‘Zinda Bhaag’ star, in the caption, wrote that nobody got injured while filming the clip and asked the people to not try it at home.

Amna Ilyas then revealed that the man was her nephew and is an actor in the making. Apart from her off-screen endeavours, she has impressed drama and film lovers with her performance in projects ‘Dil Nahi Manta,’ ‘Jhanka Taaki,’ ‘Zinda Bhaag’ and ‘Baaji.’