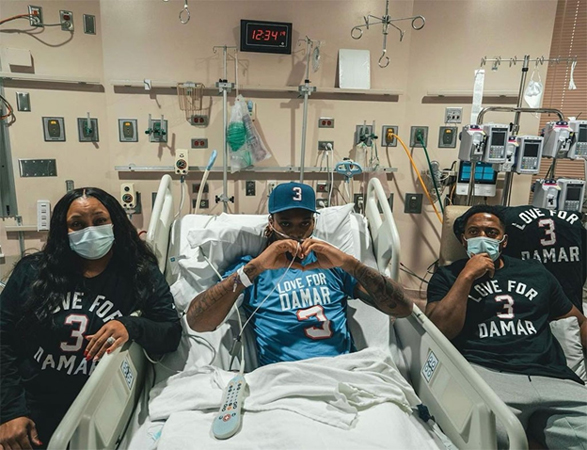 Buffalo Bills safety Damar Hamlin cheered on his teammates, who paid tribute to him on the field, from his hospital bed as they played their first game since he suffered a cardiac arrest.

On the afternoon of Jan. 8, six days after the 24-year-old was hospitalized in Cincinnati following his medical emergency and hours before his team took on the New England Patriots, the NFL star wrote on his Instagram, “It’s GameDay & There’s Nothing I Want More Than To Be Running Out That Tunnel With My Brothers.. God Using Me In A Different Way Today! Tell Someone You Love Them Today!”

The Bills entered the field at their Highmark Stadium wearing patches with his number three on their jerseys, and some players carried flags printed with the words “Pray for Damar.” “They always say, don’t play for the name on the back, you play for the name on the front,” Bills quarterback Josh Allen told his teammates before they ran out. “It’s pretty special we play for that [expletive] number on our front, too.”

Before the national anthem was performed, the crowd, many also wearing tribute apparel, cheered for Hamlin. “Today we celebrate Damar’s recovery,” the Bills tweeted, “our love for Damar, and our gratitude!”

Just before kickoff, Hamlin shared a photo of himself in his hospital bed. The athlete, who is seen wearing a “Love for Damar” jersey, wrote, “GAMETIME @buffalobills LFG!!!!!!” He soon tweeted, “OMFG!!!!!!!!!!!!!” and “FREE HINES @TheNyNy7” in celebration of Bills player Nyheim Hines giving their team a 7-0 lead by running the opening kickoff 96 yards to score a touchdown. Later, Hamlin wrote on Twitter, “I love you too @dawson_knox,” referring to Bills tight end Dawson Knox, who also scored a touchdown.

Ultimately, the Bills beat the Patriots 35-23. The Bills have rallied behind Hamlin since he collapsed on the field during their Jan. 2 game against the Cincinnati Bengals. At the time, Hamlin was hospitalized for cardiac arrest. On Jan. 6, the athlete surprised his team by speaking to them in a video call in their locker room, telling them, “I love you boys,” head coach Sean McDermott relayed to reporters. That day, Knox tweeted, “Never underestimate the power of prayer!!!”