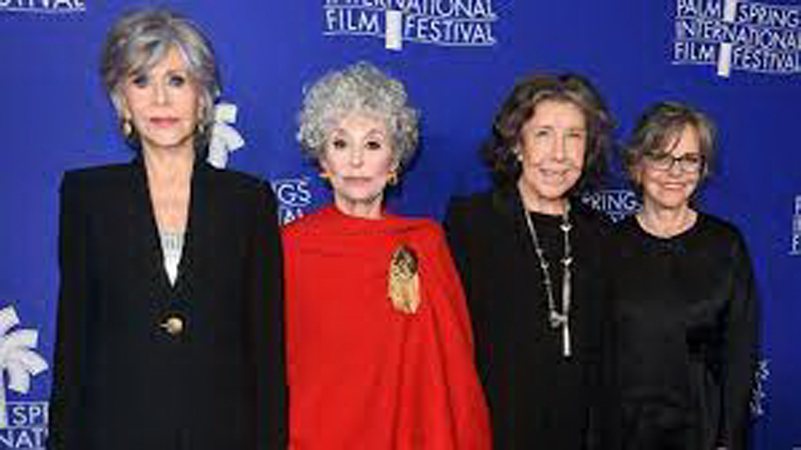 If 80 for Brady, the opening-night selection of the Palm Springs Film Festival, lures the 55-plus cohort from its living-room flat-screens to the multiplex, it won’t be for the bromides on friendship. Those are delivered with an almost shocking literalness, but sparingly at least. This movie’s dazzle is all about the chemistry of its powerhouse quartet and the potential for comic sparks, and on that front, the starry huddle of Lily Tomlin, Jane Fonda, Rita Moreno and Sally Field delivers.

They play longtime friends who have found a late-in-life love for football – specifically, the Patriots led by Tom Brady – and, in 2017, make the trek from Massachusetts to Texas to see their team in the Super Bowl. Football fans will know that this was no ordinary year for the sport; the rest of us will be enlightened. With Brady producing as well as playing himself (with charm to spare), and the NFL providing dynamic footage of the game, there’s no question of verisimilitude on the gridiron front.

As for the story itself, most of which is not set in the stadium, it’s a variously awkward, sweet and silly amalgam of day-to-day reality, sitcom zaniness and pure worship fantasy – those worshipped being, understandably, its glorious leading ladies. Scripted by Emily Halpern and Sarah Haskins, whose previous teamwork includes Carol’s Second Act and Booksmart, and directed by Kyle Marvin, an indie producer (The Climb) at the helm of his first film, 80 for Brady lays out all its plays right on the surface, sometimes ploddingly. It’s when Marvin stands back and lets his stars loose that the film finds traction, delighting in their skill at bringing expert devil-in the-details flourishes to the obvious setups. 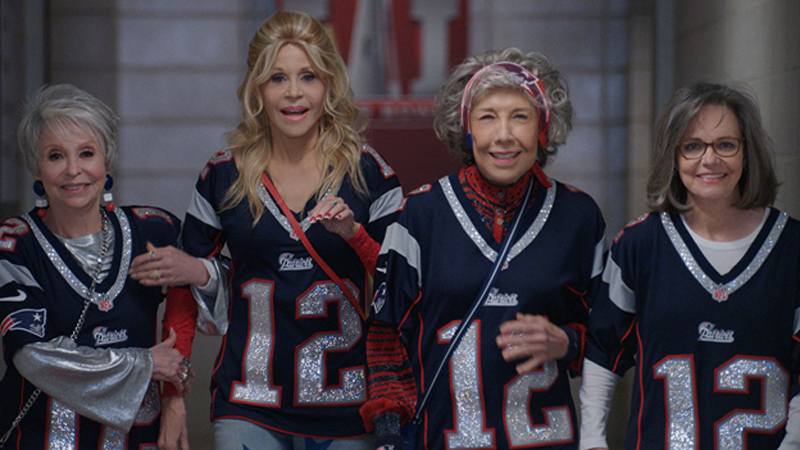 The central characters are each given a cross to bear. Moreno’s Maura, recently widowed, has put her life on hold at a plush retirement community called Calm Gardens, where a fellow resident (Glynn Turman) is smitten with her. Field’s Betty, a retired MIT mathematics professor who brings a logician’s analysis to the group’s shenanigans, is long-married and long-suffering from the neediness of her nebbishy husband (Bob Balaban).

Fonda, in candy-pink lipstick and an assortment of Dynasty-worthy wigs, plays serial monogamist Trish, a onetime TV-commercial mascot who writes football-themed romance novels and has a knack for falling for the wrong guy.

As Lou, the group’s so-called quarterback, Tomlin is a cancer survivor with a concerned daughter (Sara Gilbert). She’s also the reason the women are devoted to Brady and the Pats, whose grit on the field proved inspiring when she was going through chemo.

The screenplay grasps how superstition takes hold of otherwise rational people in the name of their sports-team devotion. Every time they gather to watch a Patriots game, Lou and company go so far as to re-create what they were doing in her living room on the occasion of a decisive Pats victory. As local sportscasters Nat and Pat, Alex Moffat and Rob Corddry further capture the emotional extremes of fandom (and also give the always problematic Bay State accent a creditable shot; the only other castmember to try is Tomlin, with an understated slant on her vowels here and there).

Through a ticket giveaway contest and a series of events that are muddled for plot purposes but also unnecessarily confusing, the four friends get themselves to Houston to see the Patriots take on the Atlanta Falcons. For reasons that Lou doesn’t reveal to her pals, this Super Bowl has taken on enormous importance to her; hiding her health concerns, she frames the need to go as perhaps their last shot to see the 39-year-old Brady play.

With “80 for Brady” emblazoned on their jerseys – even though Betty keeps reminding them that she’s only 75 – the women explore the NFL Experience theme park of attractions in the lead-up to the game, their exploits including a hot wings challenge emceed by Guy Fieri and a high-stakes poker game where Maura takes on heavy hitters played by Billy Porter, Patton Oswalt and Retta. Trish tries to resists the flirtations of a former NFL champion (Harry Hamlin as perhaps the world’s most debonair footballer), Betty shares some ridiculously weird and vulnerable moments with a partygoer (Matt Lauria), and, notably, cannabis edibles are accidentally consumed, leading to a priceless bit of dance moves by Tomlin and Field. With Moreno on board, another dance sequence makes for a straightforward, and winning, bid at a showstopping scene.

At its sharpest, the screenplay by Halpern and Haskins gives the cast terrifically droll lines – a bit of haggling between Moreno’s Maura and a scalper being a highlight. But even when it doesn’t, these four effortlessly elevate the material with their unforced readings and offhand spins, Tomlin in particular. She manages to withstand the script’s most mawkish passages, involving Lou’s psychic connection with Brady, who addresses her from TV screens and billboards with words of encouragement, a favor that she ultimately repays with her own timely pep talk.

It’s more fun to watch the foursome outwit a Calm Gardens employee (Jimmy O. Yang) and, later, a stadium facilities manager (Ron Funches). Given how deliriously witty the central performances can be, it’s too bad the writers and Marvin didn’t push the absurdity factor more. There’s no need to supplement the comic framework with feel-good affirmations when these actors bring such accomplishment and well-earned affection to their roles; they’re rooting interests from the get-go, which is, above all, the point of this cinematic valentine.

Toward that end, the cinematography by John Toll, Wynn Thomas’ production design and John Debney’s score all serve the performances unobtrusively, and Allyson B. Fanger’s colorful costumes enhance rather than upstage the characters. Set against a truly odds-defying comeback, 80 for Brady isn’t a for-the-ages score-setter, but it makes the goal when it counts.