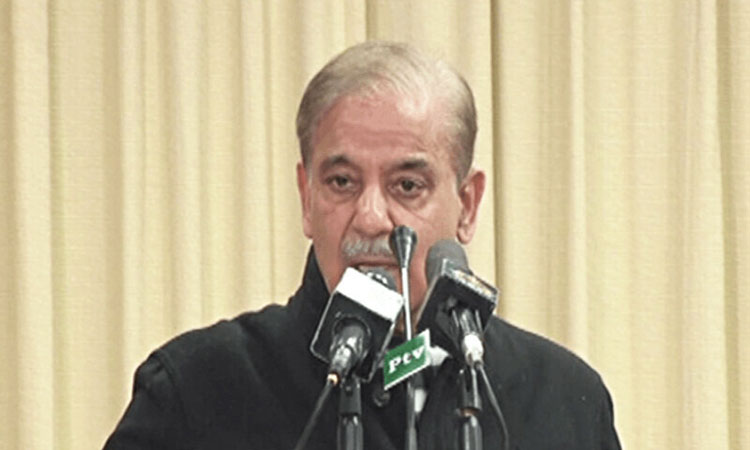 Prime Minister Shehbaz Sharif on Friday alleged that former premier and Pakistan Tehreek-e-Insaf (PTI) chief Imran Khan was brought into power with ‘full force’ but did nothing in return and instead ‘wasted the efforts of the Pakistan Army’.

Talking at the ceremony of the Hazara Electric Supply Company, the incumbent premier maintained that he had nothing to do with and was unconcerned by former army chief General (retd) Qamar Javed Bajwa helping the PTI leader. He said despite enjoying the immense support from the army, the PTI chief was ungrateful to the former military leadership – General (retd) Qamar Javed Bajwa – and was instead hurling blames at him. Calling Imran Khan a “hypocrite”, PM Shehbaz said how Gen (r) Bajwa helped Imran Khan come into power was not a secret anymore.

The prime minister criticised the previous government for undermining Pakistan’s relations with friendly countries including China, Saudi Arabia, and the UAE because ex-prime minister Imran Khan utilised most of his energies for political victimisation and blaming the opponents.

Calling Imran a thankless person, the prime minister said the Pakistan Tehreek-e-Insaf (PTI) chief had nothing to claim the credit for any development project in KP, Sindh, AJK, GB, and Hazara.

PM Shehbaz highlighted that Imran destroyed and “conducted the funeral” of the China-Pakistan Economic Corridor (CPEC) after angering and alienating China. “China, our friend, had helped us and invested $60 billion in the project,” Shehbaz lamented, adding that instead of being thankful, Imran began making accusations against China.

He furthered that no one could defeat Imran in the use of abrasive language and that the PTI chairman had ruined the society of Pakistan. The prime minister added that, on the other hand, his coalition government was attempting to improve relations with friendly countries.

Prime Minister Shehbaz Sharif said that a delegation from the International Monetary Fund (IMF) would travel to Pakistan in two to three days to finalise the ninth review of Pakistan’s $7bn Extended Fund Facility (EFF). The premier said he had spoken with International Monetary Fund (IMF) Managing Director Kristalina Georgieva Thursday night regarding Pakistan’s agreements with the international money lender. He highlighted that he assured Georgieva the current government wished to fulfil the terms of the agreement the previous government had “broken and shattered”.

He said that Pakistan would try its best to fulfil the terms of the IMF agreement but also highlighted the destruction brought by last year’s catastrophic floods.

Shehbaz said he told Georgieva that the “economic situation is in front of you, I can’t burden the common man any further […] She assured me that she understands my difficulty”. The premier reiterated that he told the IMF official that Pakistan would try and complete the terms of the agreement. He further said that he asked Georgieva to dispatch a delegation to Pakistan in order to complete the ninth review of the IMF programme. “She told me that an IMF team will arrive in Pakistan in two to three days”.

He further said that Imran did not initiate a single project during his tenure or lay down “a single brick”. He further termed Imran to be the “biggest hypocrite and most thankless person”, referring to the PTI leader’s statements against the country’s top institutions.

The prime minister said that it was Imran’s “misfortune” that he proved to be a failure, despite the fact that the Pakistan Army exhausted all its “powers and capabilities” in an effort to ensure that the country moves forward and develops.

Talking about the HESC, the premier said that the demand of the people of Hazara for a better electricity supply system, owned and supervised by the people, had been fulfilled. The premier assured the attendees that the government would complete the remaining necessary arrangements for the company as soon as possible. He thanked Minister of Power Khurram Dastgir Khan and his team for their efforts in this regard.

PM Shehbaz also announced that he had directed the authorities concerned to complete Sui Southern Gas Company (SSGC) projects that were left incomplete despite the availability of funds.